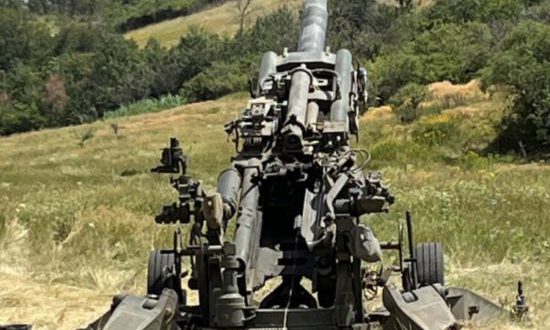 On the Ground With Artillery Battery in Donbas: The ‘Deep Fight’ Intensifies

As the Operational Pause for the ground forces continues in the Donbas following the significant Russian successes of the past month, the air campaign and artillery battles continue. The Russians are hitting targets across Ukraine with increasing frequency using long range missiles. At the same time, the “deep fight” continues around and just behind the front line here in the Donbas Salient.  The next set of Russian objectives to include Seversk in the east, Slovyansk in the north and Bahmud in the south are struck almost daily with long range artillery and precision guided munitions, inflicting numerous casualties both military and civilian.

Closer to the front line, while the infantry and armored units eye each other across defensive positions, the artillery continues the intense and dangerous battle of indirect fire. I recently joined a Ukrainian battery set up south of Seversk, and observed as they skillfully employed the U.S. supplied 155 millimeter, 777 howitzers.

The battery was composed of experienced artillerymen who had received specific training on the U.S. artillery piece in Germany earlier in the year.  They were now engaged daily in firing on the Russian positions and dueling with their artillery.

Heavily outnumbered by the Russians, the Ukrainians very skillfully took full advantage of the terrain to mask their guns, and continued to take a toll on their enemies.  Russian counter fire seemed ponderously slow, shelling checkpoints and other known targets in the vicinity.  However, we were told that later that night after our departure the Russians massed fire in the valley, unsuccessfully trying to knock out the Ukrainian battery.

In addition to the U.S. supplied cannon, the Ukrainians are having significant success with the HIMARs multiple rocket system, including a strike on a major Russian command post this week, killing another senior Russian general.

While exacting a heavy toll with the US weapons systems, the overall Ukrainian defensive position remains a difficult one, and the Russians continue to maintain constant pressure as they prepare for the next phase of the ground offensive.

As the Russian Ministry of Defense has announced this week, it will increase the tempo of offensive operations. The coming weeks will be critical in both the fight for the Donbas and also the outcome of the war.

Owen Thorne is Chief Correspondent for Soldier of Fortune.

Previous Russia and Ukraine Use 1940’s-Era Rocketing Method Against Each Other’s Forces
Next Alex Murdaugh Called Son Buster From Jail, Told Him to Hunt Property Where Family Members Gunned Down