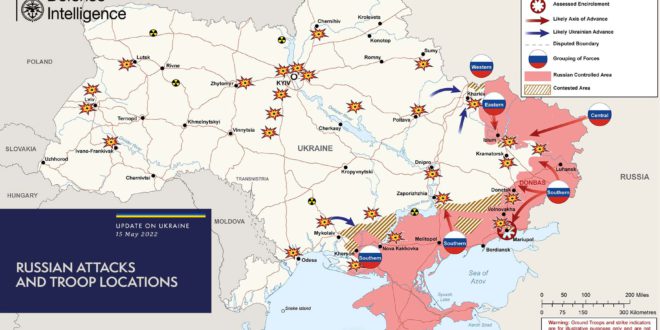 Map via British Ministry of Defense

Russia’s campaign in the Donbas region of Ukraine has “lost momentum and fallen significantly behind schedule,” and likely will not accelerate its advance during the next month, according to British military intelligence.

“Despite small-scale initial advances, Russia has failed to achieve substantial territorial gains over the past month whilst sustaining consistently high levels of attrition,” the U.K. Ministry of Defense said on Sunday. The MoD released its findings in a series of May 15 updates on Twitter.

“Despite small-scale initial advances, Russia has failed to achieve substantial territorial gains over the past month whilst sustaining consistently high levels of attrition,” the ministry wrote. “Russia has now likely suffered losses of one third of the ground combat force it committed in February.”

Russia has lost “critical enablers” such as bridging equipment and surveillance drones, the ministry wrote, noting that bridging equipment has been in short supply throughout the entire conflict. Russia additionally has lost drones to Ukrainian shoot-downs.

The battlefield assessments came as Russian forces retreated from the area surrounding Kharkiv, following an earlier withdrawal from the capital city, Kyiv.

“Russia failed to take Kyiv. They’re pulling back from around Kharkiv, their major offensive in Donbas has stalled. Russia is not achieving its strategic objectives,” NATO Secretary General Jens Stoltenberg said on May 15.

Ukrainian President Volodymyr Zelenskiy said on May 15 that “the situation in Donbas remains very difficult,” and that Russian troops were “still trying to come out at least somewhat victorious.”

Russia on Sunday launched rocket attacks on the Lviv region in western Ukraine.

The Russian offensive overall is on a downward trajectory, British officials said.

“Russian forces are increasingly constrained by degraded enabling capabilities, continued low morale and reduced combat effectiveness,” the Ministry of Defense wrote. “Many of these capabilities cannot be quickly replaced or reconstituted, and are likely to continue to hinder Russian operations in Ukraine.”

The offensive is not on course to quickly recoup, the ministry said.

“Under the current conditions, Russia is unlikely to dramatically accelerate its rate of advance over the next 30 days,” the ministry wrote.

Russia invaded Ukraine on Feb. 24, planning for a quick victory.