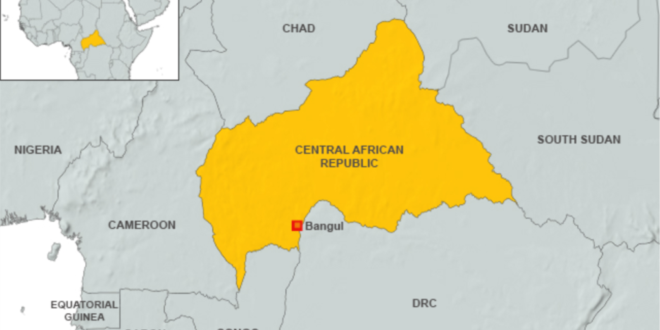 Rebels killed 10 civilians during an attack northeast of the Central African Republic capital of Bangui, the spokesperson for the U.N. peacekeeping force in the country said.

“Armed elements of the Union for Peace in Central Africa (UPC) have committed abuses on populations, killing 10 people” in the village of Bokolobo last Monday, said Lieutenant Colonel Abdoul Aziz Ouedraogo, spokesman for the Minusca force.

They had previously attacked security force positions, he added, without elaborating.

“In response to these atrocities, the force immediately deployed Mauritanian blue helmets to protect the populations,” Ouedraogo added, while speaking to the Agency France-Presse.

In a statement released on Friday, Ali Darassa, military leader of the rebel UPC group, condemned a massacre on Monday in the same village “by (Russian) mercenaries from the Wagner company” and other groups.

The Central African Republic, the second least developed country in the world, has been the scene of a civil war since 2013.

At the end of 2020, the most powerful of the many armed groups that then shared two-thirds of the territory had launched an offensive on Bangui shortly before the elections. The CAR’s President Faustin Archange Touadera sought help from Moscow for his impoverished army.

Hundreds of Russian paramilitaries then joined hundreds present since 2018 and made it possible, in a few months, to repel the rebels’ offensive and then to push them back from a large part of the territories and cities they controlled.

But they were unable to re-establish the authority of the state everywhere.

On March 30, the U.N. High Commissioner for Human Rights, Michelle Bachelet, condemned “serious human rights violations” in CAR including “murders and sexual violence” against civilians, committed by the rebel groups but also the armed forces of the regime and their Russian allies.