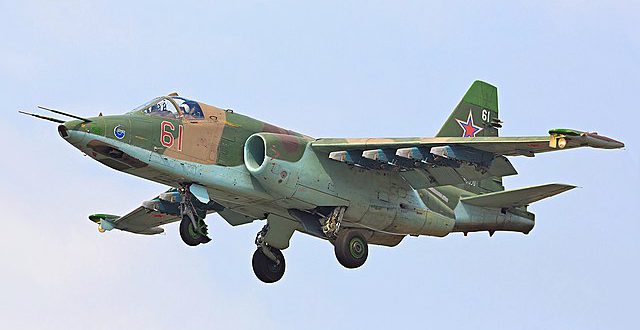 Leo can’t stop watching the video. The former Russian fighter pilot takes an indoor break from the Reno Air Races – “the smoke is too much; the wildfires” – and offers Soldier of Fortune his theories on why the Russian Air Force is largely missing from the war in Ukraine.

Only, he can’t stop watching the video; the one where two Russian Su-25s take off supposedly in Crimea, and one literally crashes and burns in a pouf of oily black smoke. This comes as a shock to the pilot who, like others who flock to the Reno Air Races, knows his way around a military jet cockpit.

“Pizdets,” Leo mutters, over and over. “Pizdets.” Or, loosely translated: “That is fucked up.”

So, too, is the Russian war machine in Ukraine. During the nearly seven months of Vladimir Putin’s operation to swiftly roll up the Ukraïnets, the vaunted Russian ground forces seem barely competent. The air fleet has been mostly absent.

This is where Leo becomes the critical insider. “I’m telling you: for their own sake, it’s good they are not flying much,” he said. “They should ground themselves.”

That’s because they don’t do well among the clouds over Ukraine. When Russian planes do appear in the skies there, they tend to crash and burn.

“Russia has not lost so many aircraft in any war in decades,” the Ukrainian president said in a May video message. Since then, the number has grown.

Sunday morning in Crimea. Another Su-25 is down.
Incompetence at all levels. Weapons in the hands of russians are the danger, first of all, to themselves. pic.twitter.com/4xJdapzR7w

This is a mixed situation for Leo. A very Americanized longtime immigrant from Russia, the former military pilot doesn’t use his given name, Lev. He switched years ago to the Westernized version, “Leo.” He shakes his head at Russia’s incursion into Ukraine. “This is such folly,” he says. But, he adds, as an aviator: “The air war portion is very bad for the pilots.”

Russian aviators quickly caught on to the situation. They learned that flying over Ukraine was bad for their survival, experts have noted.

“The losses they took in the first 30 days of the war were significant,” according to Soldier of Fortune war correspondent Owen Thorne. “I think that intimidated them. They’re not anxious to take losses.”

Some flew short sorties to shoot and evade, while others only fired their weapons from across the border.

“They’re staying over the Black Sea, or they’re staying in Russia and firing guided missiles. They simply are not comfortable flying in Ukraine for any extended period of time,” said Professor Phillips Payson O’Brien, a military expert at the University of St. Andrews in Scotland. “That means they can drop bombs, they can launch missiles, but they can’t control the airspace over a battle,” O’Brien told NPR.

“They don’t get the hours,” Leo said. “In Russia, even the transport pilots get more hours.”

The context in Ukraine is striking, according to David Isby, an expert on the Russian military. Longtime readers of Soldier of Fortune will be familiar with Isby’s masterful reporting on that and other military topics.

“The Russian Air Force in Ukraine has shown that you cannot get blood from a turnip nor generate air power through using manned aircraft against an organization that has received lots of investment in priorities and resources rather than trying to look good,” Isby said.

The Russian air force is, however, flying multiple sorties over Syria, Thorne noted.

That’s because the situation in Syria is more favorable to Russian air operations, Isby said.

“The lack of an organized air defense, or bombing non mobile targets, made it more of a controllled experiment,” Isby said.

To Leo, the best position for Russian fighter pilots exists in Reno.

“They can come here,” Leo said. “I will show them the racing airplanes. They will like that much better than getting shot down over Ukraine.”

Previous Now, That’s a Hot Vulcan: This Cold War British Bomber Nearly Plowed Into a Busy Road
Next Attacks Are on the Rise Against Pro-Russian Officials in Ukraine