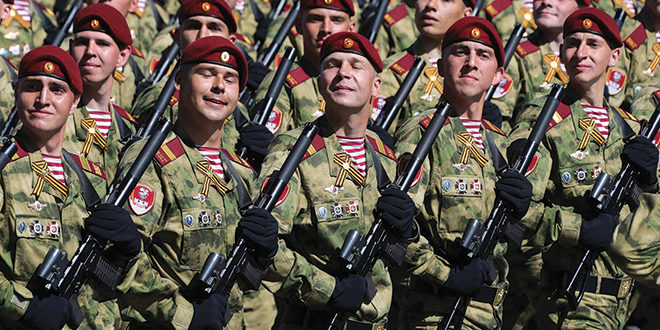 Russian soldiers on parade in Moscow. Photo: Office of President of the Russian Federation

The flyer appeared earlier this month, pasted to the walls of apartment building entryways in the Moscow suburb of Odintsovo — and hard to miss above the announcement for when the building’s hot water would be shut off for maintenance.

State TV newscasts feature telephone numbers where volunteers can call to get information about joining the “special operation” in Ukraine. Headhunter websites are littered with vacancies for “contract soldiers.” Reports say Russian officials want to create “volunteer battalions” in every one of the country’s 80-plus regions, generating up to 34,000 new troops for the war effort, according to one think tank.

Nearly five months after launching the largest war in Europe since World War II, Russia’s military has a problem: not enough men; too many dead and wounded.

Russian officials are conducting a sweeping campaign to recruit more men to replenish the ranks of its units waging war on Ukraine, which the Kremlin calls a “special military operation.”

News that Russia was scrambling to find more personnel has been well documented in recent weeks. Lawmakers in May voted to raise the upper age limit for military service so men over 40 can now enlist.

But how civilian and military officials are going about it — trying to recruit thousands without provoking backlash from Russian society — has only come into focus more recently.

“It’s not mobilization,” said Oleg Ignatov, a Russian analyst with the International Crisis Group, a Brussels-based research organization. “They don’t want to declare war, for the time being. But they need men, infantry. They’ve experienced serious losses, and the success of this military operation won’t happen without serious recruitment of new people.

“It’s a flexible system, like covert recruiting, a hybrid system,” he told RFE/RL. “But no one is forcing anyone to do anything. “

“Russia is facing a systemic manpower issue, and they are using multiple ad-hoc methods to fill in the gaps with volunteers, mercenaries, prison battalions, and personnel from other parts of the government like the national guard,” said Dara Massicot, a policy researcher at the Rand Corporation and former senior analyst at the U.S. Defense Department. “It results in minimally trained soldiers and presumable lack of cohesion at the unit level.”

“It’s really like spackle on a wall at this point,” she said.

Overall, Russia’s losses are believed to be substantial. Western intelligence agencies say at least 15,000 troops have been killed, with higher estimates exceeding 20,000 — a figure that exceeds the Soviet military’s entire death toll over 10 years of war in Afghanistan in the 1980s. The last public announcement of death toll by Russia’s Defense Ministry in March was 1,351 killed in action.

In the Tver region, northwest of Moscow, a military recruiter posted a video on July 11 on social media calling for men to sign up for the “special military operation.” The advanced age of the recruiter and his halting presentation drew mockery from Russians and Ukrainians alike.

Still, like in Odintsovo, the beginning monthly salary, the recruiter said, was 200,000 rubles ($3,400), about four times the average salary nationwide and a princely sum in regions where the cost of living and average salaries tend to be lower than in cities like Moscow and St. Petersburg.

The Odintsovo flyer recruiting male volunteers appeared sometime around July 1, according to the local resident who photographed it and shared it with RFE/RL. The person, who asked not to be named, said it was unclear if anyone had responded to it but noted that her neighborhood was a new, well-to-do development where younger people and young families lived.

Russia’s most notorious private military company, Vagner, has also been aggressively recruiting. The company, which is widely believed to be owned by St. Petersburg businessman Yevgeny Prigozhin, gained notoriety during earlier deployments in Syria and the Central African Republic and has also been seen in other countries like Libya and Mozambique.

Vagner units have also been on the front lines on the battlefield in Ukraine’s Donbas; Ukrainian military intelligence say the units were at the vanguard of offensive operations to take the cities of Mariupol and, more recently, Syevyerodonetsk.

As part of its marketing campaign, the company appears to have produced short video clips, published and reposted on the Russian social media networks VK and Odnoklassniki. Many feature pounding, heavy guitar music with the words “Become a winner. Prove you’re a real man.” Longer videos are published on its website, which appears to be accessible only within Russia.

“Do you want to inscribe your name in the history of military glory, but don’t want to fight bureaucracy and controls? Then there’s good news for you: The orchestra needs musicians in Ukraine!” the page’s main appeal says. “Join us to liberate the entire Donbas! Embark on your first combat campaign with living industry legends!”

There was no immediate response to messages sent via the website’s portal by RFE/RL or to its main phone number.

A reporter for the business newspaper RBK posed as an interested volunteer for a report published on July 9, calling several recruiters and private companies to learn the details of volunteering.

“The most important thing is to delete all social networks…so that you are not there. Even old accounts that were there five or six years ago should be deleted. This is the condition of our company,” the newspaper quoted one recruiter as saying.

In a detailed investigation published on July 13, the online news site Meduza detailed how Vagner and at least one other private military company worked closely with the Defense Ministry, both on deployments and recruiting, as part of covert mobilization.

“The line between mercenaries, the regular army and ‘volunteers’ has been completely erased during the war in Ukraine,” Meduza said.

“There are no wild units,” one private soldier was quoted as saying, using a term that describes independent or autonomous private forces. “Everyone works for the Defense Ministry.”

Prigozhin’s main company, known as Concord, said in a statement published on July 13 that it intended to sue the authors of the Meduza report under a new law that criminalizes distributing “deliberately false information” about the Russian armed forces.

On paper, Russia has a huge military: around 1 million active-duty members including all branches. The country also retains a system of mandatory conscription, where all men between 18 and 27 are required to serve at least a year in the armed forces, although many find ways to avoid service.

The military runs two cycles of conscription, in April and in September. This April, 135,000 men were drafted.

Conscript soldiers are forbidden from serving abroad, including in Ukraine. In the early days after the invasion, some conscripts were deployed in the invasion, something the Kremlin said was not supposed to have happened.

The ongoing national recruiting campaign reportedly includes efforts to pressure conscripts nearing the end of mandatory service — something that will occur in the next two months for the September cycle — to sign on for new volunteer contracts.

“Russia needed a systematic solution to its manpower problems months ago like a large reservist mobilization or even partial mobilization,” Massicot said, “but such efforts would be politically unpopular and also structurally difficult for Russia’s mobilization system.”

So far, it is unclear how effective the recruiting campaign has been. The Defense Ministry, regional recruiting centers, and private companies release no figures on new personnel.

But while signs of public backlash are muted so far, there are hints of discontent in some regions among some ethnic minority groups who experts say have suffered disproportionate losses.

Regional officials in places like Dagestan, Ingushetia, and Kalmykia have already moved to create units comprised mainly of local men. The units primarily include contract soldiers who have previous military training and have been targeted by local recruitment drives.

One military unit that deployed to Ukraine was made up primarily of soldiers from Buryatia, a southern Siberian region that like many distant Russian regions suffers from relatively high unemployment and low salaries.

Buryat activists said that in recent weeks as many as 500 soldiers from Buryatia serving under contract have returned home, voicing doubts about the invasion. Some questioned the goal stated by President Vladimir Putin at outset of the invasion of “demilitarization and denazification” — a term used that Kremlin officials have used to falsely assert that Ukraine’s government is controlled by Nazi sympathizers.

“No one wanted to be an occupier,” said Viktoria Maladayeva, head of the Free Buryatia Foundation, a nongovernment organization that has provided legal counsel for soldiers seeking to break their contracts.

“We Buryats, as an ethnic minority, constantly encounter racism and discrimination in Russia,” she told Current Time. “It’s Russia that needs ‘denazification.'”

Maksim Fomin, a former soldier who fought in Ukraine’s Donbas and now runs a widely read pro-Russian military blog, said in a video published on July 13 that Russian officials were planning to form volunteer battalions in every Russian region.

Under optimal conditions, the effort could yield as many as 34,000 new recruits by the end of August, the Institute for the Study of War estimated. How ready such units would be for active combat on short notice is unclear, the Washington-based think tank said.

The city of Moscow has one such volunteer battalion already in operation, funded from the city budget, according to Meduza’s investigation. Dubbed Sobyanin’s Regiment after the Moscow mayor, the unit accepts volunteers from around the country, not just Moscow.

Ignatov, the Crisis Group analyst, said the disproportionate losses among non-Slavic minority groups is likely not a deliberate decision by military planners or political leaders. Rather, he said, it’s likely a reflection that the military is a lucrative employment opportunity for more impoverished regions, particularly given the salaries some positions are advertising.

“Those who support the war are passive. People can support it while sitting on the couch, watching TV. But they’re not being asked to go fight. If they were, that would change the dynamic. Or if the losses mount for Russian society,” he said.

“This hybrid system works for the Kremlin, and the political system, because it allows them for maintain the perception of normalcy,” Ignatov said.

Previous The Wagner Group in Mali: A Special Report
Next Russia and Ukraine Use 1940’s-Era Rocketing Method Against Each Other’s Forces