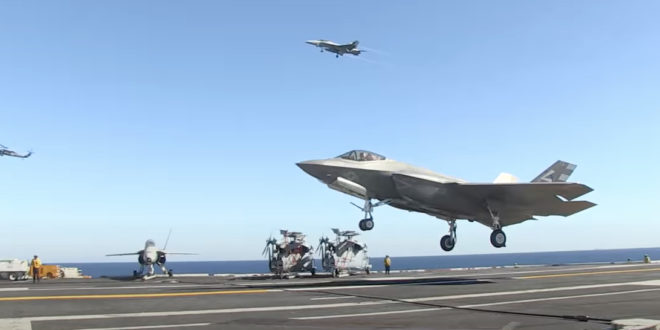 The video shows the ramp strike of the F-35C assigned to the “Argonauts” of VFA-147 Strike Fighter Squadron, the 95 mile-an-hour slide of the fighter down the angled deck of the carrier, its slide into the ocean and the start of damage control on the flight deck.

The Navy has charged one senior chief, three chiefs and an ensign with failure to obey a lawful order under Article 92 the Uniform Code of Military Justice, Cmdr. Zach Harrell a spokesperson for Naval Air Forces told USNI News.

PEARL HARBOR – An F-35C Lightning II, assigned to Carrier Air Wing (CVW) 2, had a landing mishap on deck while USS Carl Vinson (CVN 70) was conducting routine flight operations in the South China Sea, Jan. 24, 2022. The pilot safely ejected from the aircraft and was recovered via U.S. military helicopter. The pilot is in stable condition. There were seven total Sailors injured; three Sailors required MEDEVAC to a medical treatment facility in Manila, Philippines, and four were treated by on-board medical personnel. All three MEDEVACs are assessed as stable. Of the four Sailors treated by on-board medical, three have been released. Additional details and the cause of the inflight mishap is under investigation.

8:33 a.m. – Updated to reflect that all three MEDEVACed Sailors are in stable condition.

Previous And thus the Saudi Oily Grip on the United States Begins
Next General Pulaski, Warrior for Liberty on two Continents