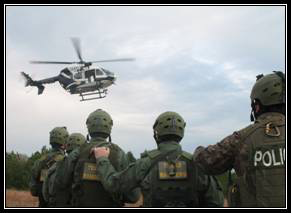 Specialized Units of the Silver Stars and Sixguns: Texas Rangers

“They were men who could
not be stampeded”

That’s the way the late Colonel Homer Garrison, Jr., longtime director of the Texas Department of Public Safety, once described the men who have worn the silver or gold star of the Texas Rangers, the oldest law enforcement agency in North America with statewide jurisdiction.

Beginnings Of The DPS
The Texas Senate, on September 25, 1934, formed a committee to investigate crime and law enforcement in the state. The committee produced a report in early 1935 that was singularly critical of Texas law enforcement. However, the document also proposed a solution: the creation of a state law enforcement agency to be known as the Department of Public Safety.

Under the new DPS, the Ranger force would consist of 36 men. Though smaller than it had been in years, the Texas Rangers would have for the first time in its history the benefits of a state-of-the-art crime laboratory, improved communications, and, perhaps most importantly, political stability. In name, the Rangers were 100 years old. With the creation of the DPS, the Rangers would have professionalism to match their tradition.

Tom Hickman, a veteran Ranger, was named Senior Captain of the Rangers. The force was organized into five companies, each headed by a captain.

Within a year of their incorporation into the DPS, the Texas Rangers got national publicity with the opening of the Texas Centennial Exposition at the State Fair grounds in Dallas. The headquarters for Company B was set up in a specially-built log building on the fair grounds. Texas Rangers were seen in newsreel footage in movie houses around the nation.

Modernization
Depression-era DPS appropriations were lean, but as the decade of the 1930s ended, the Texas Rangers were on their way toward modernization. Fingerprint and modus operandi files were available for Ranger use at the Department’s Camp Mabry headquarters in Austin, and Ranger vehicles were equipped with police radio receivers, though two-way radio would not be available to Rangers until the 1940s. Former Ranger Manuel T. (Lone Wolf) Gonzaullas headed the Department’s Bureau of Intelligence, which gave Rangers the benefit of chemical ballistic and microscopic testing in their criminal investigations.

In their early years as part of the DPS, Rangers were furnished a Colt .45 and a lever action Winchester .30 caliber rifle by the state. Rangers had to provide their own car, horse, and saddle, though the DPS issued horse trailers and paid automobile mileage.

For the first time, Rangers had the benefits of in-service training. Weekly activity reports of their activities was required.

Keeping The Peace
Rangers continued to add to their legend during the 1950s. When inmates in the Rusk State Hospital for the Criminally Insane rioted and took hostages, Ranger Captain R. A. “Bob” Crowder walked into the maximum security unit armed only with the .45 on his hip. Crowder and the leader of the mob had a conversation and the inmates surrendered.

Rangers made national headlines by their quiet but firm presence at various campuses in the state as school integration was for the most part peacefully implemented. When violence seemed possible at the high school in Mansfield, Rangers were sent to the school. A photograph of Ranger Sergeant Jay Banks, reflectively leaning against a tree in front of the high school as students walked into the building beneath a dummy hanging in effigy, was widely published.

Also during the 1950s, Rangers calmed down a violent steel mill strike in East Texas; shut down illegal gambling in Galveston and participated in numerous cases, some sensational, many merely routine investigations.

Ranger activity in these cases usually was documented as briefly as possible. This was Ranger Zeno Smith’s report for July 3, 1956: “Wilson County Sheriff requested the assistance of one Ranger in the investigation of twenty-five head of cattle near Floresville. A lengthy investigation resulted in the filing of five complaints and indictments in each case against the suspect who is still at large. 115 hours.”

In 2018, a total of 2726 investigations resulted in 1071 felony arrests, 77 misdemeanor arrests. The Texas Rangers secured 7660 statements, including 758 confessions to various crimes. There were 524 convictions for various crimes investigated that resulted in 5 death sentences, 62 life sentences and a total of 7041 years in penitentiary time being assessed. Rangers conducted 15 hypnosis sessions on criminal investigations.

Several units and teams in the Ranger Division are charged with handling a variety of specialized functions:

Unsolved Crimes Investigation Program
The mission of the Unsolved Crimes Investigation program is to provide Texas law enforcement agencies with a process of investigating unsolved murders or what appears to be a serial or linked criminal transaction.  Since there is no statute of limitations on the offense of murder, the state has the moral and statutory obligation to pursue these cases to a successful resolution or until no other leads are viable.

Public Corruption Unit
The 81st session of the Texas Legislature passed HB2086; this bill created the Public Corruption Unit within the Texas Department of Public Safety, under the responsibility of the Texas Ranger Division.  The Texas Rangers are committed to fighting public corruption, as it relates to public officials, law enforcement officers, and others that hold a position of public trust.  Fighting corruption is vital to preserving our democracy, protecting our borders, and securing our communities.

In 2015, the 84th Texas Legislature passed House Bill 1690, which created a Public Integrity Unit within the Texas Ranger Division of the Texas Department of Public Safety to investigate offenses against public administration.

The Texas Ranger Division created a Special Operations Group to be tasked with the oversight of the Special Weapons and Tactics team, Regional Special Response Teams (SRT’s), Ranger Reconnaissance Team, Crisis Negotiations Unit, and the Explosive Ordnance Disposal. The Texas Rangers currently coordinate border security operations through six (6) Joint Operations and Intelligence Centers (JOICs) along the Texas-Mexico border and Coastal Bend area of the state. In response to legislation, the Texas Rangers created a Public Corruption Unit and an Unsolved Crimes Investigation Program.

In 2018, a total of 2726 investigations resulted in 1071 felony arrests, 77 misdemeanor arrests. The Texas Rangers secured 7660 statements, including 758 confessions to various crimes. There were 524 convictions for various crimes investigated that resulted in 5 death sentences, 62 life sentences and a total of 7041 years in penitentiary time being assessed. Rangers conducted 15 hypnosis sessions on criminal investigations.Texas Rangers