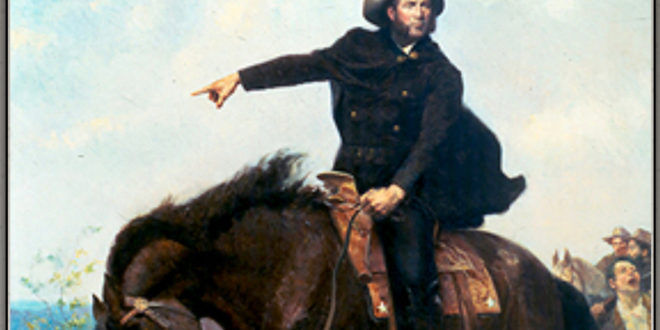 The Battle of San Jacinto: Eighteen Minutes that Changed the World, 21 April, 1836

The Battle of San Jacinto lasted less than twenty minutes, but it sealed the fate of three republics. Mexico would never regain the lost territory, in spite of sporadic incursions during the 1840s. The United States would go on to acquire not only the Republic of Texas in 1845 but Mexican lands to the west after the Treaty of Guadalupe Hidalgo ended the Mexican War in 1848.

In March of 1836, things were not going well for Sam Houston’s Texas revolutionaries. Having declared independence from the official Mexican government, they were now running from the Mexican army — and running out of time.

Houston’s men, their families uprooted and futures uncertain, were ready to fight. On April 17th, their retreat led them to a fork in the road. One road led to Louisiana and possible refuge in the United States. The other led to Harrisburg and the edge of the coast. The Texian army took the road to Harrisburg without objections from Houston.

The next day, Houston reached White Oak Bayou, where he learned that Santa Anna’s forces had just crossed the nearby bridge over Vince’s Bayou. On the 19th, Houston crossed Buffalo Bayou between Sims’ and Vince’s Bayous just outside of Harrisburg. Marching down the bayou, they captured one of Santa Anna’s supply boats.

Just miles away from Houston’s men, Santa Anna’s forces now numbered around 1,200. The Texans numbered 900. On April 20th, Sidney Sherman gave the Mexican army a quick jab with a small skirmish that quickly fizzled out. Both sides then camped for the night.

On the morning of April 21st, General Houston held a council of war. The majority of his officers voted to await Santa Anna’s attack in order to leverage their position. He let each man in the council plead his case. Then, he made a decision, which he kept to himself until that afternoon: they would attack.

Eighteen Minutes that Changed the World

Around 4:30 p.m., the Mexican soldiers awoke from their afternoon siestas to the smell of gunpowder and cries of vengeance. Flushed with victory from the siege of the Alamo, Santa Anna had failed to post sentries to monitor the Texians’ activities.

Eighteen minutes was all it took for the Texians to take control of the Mexican camp.

Over 600 Mexican soldiers were killed while more than 700 were allowed to surrender. Only nine Texians were killed or mortally wounded. Sam Houston had two horses shot out from under him and was himself shot in the ankle. Santa Anna was found the next day hiding in the grass dressed as a common foot soldier.

The Opening of the West, a deeper dive

For Mexico, the defeat was the beginning of a downhill martial and political spiral that would result in the loss of nearly a million square miles in territory. For Texians, their victory led to annexation into the United States and the beginning of the Mexican-American War. In the end, the United States would gain not only Texas but also New Mexico, Nevada, Arizona, California, Utah and parts of Oklahoma, Kansas, Colorado and Wyoming.

By early April, Santa Anna had divided his forces in a three-pronged attack: a northern army, under General Antonio Gaona , the central army under Santa Anna and General Joaquin Ramirez y Sesma, and a coastal army under command of General Jose Francisco Urrea.

The Texan army, meanwhile, had been in retreat since March 13, when it left Gonzales after learning of the Fall of the Alamo. News of the March 27 massacre at Goliad led several men to leave the army to assist their families to flee before the advancing Mexican army. The resulting “Runaway Scrape” involved most of Eastern Texas, and panicked the government. Sam Houston spent the next few weeks attempting to train the recruits into something resembling a disciplined army, then continued his march toward the Sabine.

On April 16, learning that Santa Anna had isolated his army, Houston pursued him to Buffalo Bayou, arriving there at midnight on April 19, and continuing their march toward Lynch’s Ferry on the 20th. That afternoon, General Sidney Sherman engaged the Mexicans in a skirmish that almost resulted in a full scale battle. Mirabeau B. Lamar’s heroic actions in that conflict earned him a battlefield commission as Colonel.

General Sidney Sherman. The next day, Houston learned that General Martin Perfecto de Cos had crossed over Vince’s Bridge with reinforcements. Houston ordered Erastus “Deaf” Smith to destroy the bridge-a move that prevented further swelling of Mexican ranks, and likewise prevented retreat by both the Mexican and Texan armies.

About 3:30 in the afternoon, during the Mexican siesta period, Houston distributed his troops in battle array, bracketing the line with the “Twin Sisters” cannon. Shielded by trees and a rise in the terrain, the Texans were able to advance with some security. Then with the cries “Remember the Alamo” and “Remember La Bahia” or “Remember Goliad” ringing along their lines, the Texans swooped down on the dismayed Mexican army, pursuing and butchering them long after the battle itself had ended.

630 Mexicans were killed and 730 taken prisoner. Texans lost only 9 killed or mortally wounded; thirty were less seriously wounded. Among the latter was General Houston, whose ankle was shattered.

I Erastus “Deaf” Smith. On the day following the battle, a small party discovered Santa Anna and brought him into camp, unaware at first of the importance of their prisoner. As part of his surrender agreement, the president/general ordered the Mexican troops remaining in Texas immediately to retreat south of the Rio Grande.

On May 14, 1836, the public and private treaties of Velasco, were signed by Presidents David G. Burnet and Antonio Lopez de Santa Anna. They confirmed the Mexican retreat and declared an end to the war. Neither the Texas nor Mexican governments accepted the treaties, however, and a state of war existed throughout most of the Republic of Texas’ existence.

And I the said John Forbes under Oath maketh the following statement of the Capture of Gen’l S’t Anna and of his introduction to Gen’l Houston, as follows.

Some two days after the Battle of San Jacinto and in the Morning at early sunrise I was attending to some duties close by the guard fire, where the Mexican prisoners were under guard I noticed two men approching me from the Prairie skirting Buffalo Bayou, as they came up to where I was standing. One of the men was a very youthful soldier with his Gun on his shoulder, belonging to Captain Baker’s company I think his name was Joel Robertson, the other man was a Mexican in undress and unarmed, the young soldier stated that as he was coming into camp the Mexican threw himself in his way, and requested to be taken to Gen’l Houston The Mexican then quickly addressed me in Spanish, which rendered into english meant, Sir Gen’l Houston, Entimating a desire to see the General and took from somewhere about his person a Letter which he handed to me, pressing his finger on its address, which read Don Lopez de Santa Anna &c I returned the letter to him and asked him if he was Gen’l S’t Anna he replied affirmatively and again repeated Sir Gen’l Houston with emphasis, at that moment I was joined by Col. Geo. W. Hockley whom I told who the prisoner was, and that we would take him before Gen’l Houston at that same time we heard from the Mexican Prisoners at the Guard fire an exclamation of El President! El Presidente! The Prisoner placed between Col Hockley and myself, our young Texian Soldier in the rear passed through Col. Burleson’s Quarters at the head of which Gen’l Houston’s tent was pitched On our arrival we found the Gen’l outside of his tent stretched on a mattrass at the foot of a large tree apparently asleep resting on his left side and his back towards us. We ranged up alongside and I put my hand on his arm to arouse him, he raised himself on his elbow and looked up the Prisoner immediately addressed him telling him who he was and surrendering himself to him a prisoner of War. Gen’l Houston looked at him intensely but made no reply, turning to me requested me to proceed to the Guard fire and bring from thence before him, a young man who was reported to be the private secretary of Santa Anna and who could talk english fluently. I did so, and on my return found the Prisoner seated quietly in a chair beside the Generals Mattrass. The young man on seeing the Prisoner assured General Houston that the Prisoner then before him was truly Gen’l Santa Anna

Throughout the whole General Santa Anna’s demeanor was dignified and soldierlike but a close observer could trace a Shade of sadness on his otherwise impassive countenance.