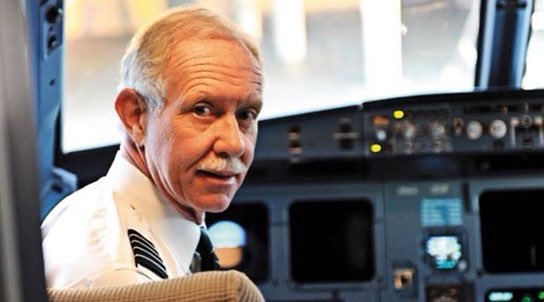 In what will forever be known as The Miracle on the Hudson, Sully Sullenberger and his crew saved the lives of 150 passengers after being forced to splash down in the Hudson River.

On January 15, 2009, US Airways Flight 1549 splashed into the Hudson River in an emergency landing led by Captain Chesley B. “Sully” Sullenberger. It was a moment that gave Americans hope and captivated the nation. George Clooney narrates this incredible story as part of American Valor: A Salute to Our Heroes, and the audience meets Sully as he remarks on the incredible moment.

Born and raised in Denison, Texas, Sullenberger pursued his childhood love of aviation by learning to fly at age 16, while still in high school, and later at the United States Air Force Academy. At his graduation from the Academy in 1973, he received the Outstanding Cadet in Airmanship Award. In addition to his bachelor’s degree in psychology, he also has two master’s degrees, one in industrial psychology from Purdue University and one in public administration from the University of Northern Colorado. He also has an honorary Doctorate of Letters from Purdue University.

Sullenberger served as a fighter pilot for the United States Air Force. He advanced to become a flight leader and a training officer, attaining the rank of captain. During his active duty, he was stationed in North America and Europe. After serving in the Air Force, in February 1980 Sullenberger became an airline pilot with Pacific Southwest Airlines, later acquired by US Airways, until his retirement from commercial flying in March 2010.

Prior to gaining worldwide attention, Sullenberger was an active and ardent safety advocate throughout his four-decade-long career. He was selected to perform accident investigation duties for the United States Air Force, and served as an Air Line Pilots Association (ALPA) representative during a National Transportation Safety Board accident investigation. Additionally, Sullenberger served as a Local Air Safety Chairman for ALPA, and was a member of one of their national technical committees, where he contributed to the creation of a Federal Aviation Administration Advisory Circular. He was also instrumental in developing and implementing the Crew Resource Management course used by US Airways, and he taught the course to hundreds of other airline crewmembers.

After logging more than 20,000 hours of flight time Sullenberger became internationally renowned on January 15, 2009 when he and his crew safely guided US Airways Flight 1549 to an emergency water landing in New York City’s frigid Hudson River. The Airbus A320’s two engines had lost thrust following a bird strike. Sullenberger and his crew received international acclaim for their actions that day, including the passage of a Congressional resolution recognizing their bravery. Sullenberger was ranked second in TIME’s “Top 100 Most Influential Heroes and Icons of 2009” and was awarded the French Legion of Honour.

Sullenberger is the #1 New York Times best-selling author of Highest Duty: My Search for What Really Matters and also wrote Making a Difference: Stories of Vision and Courage from America’s Leaders. Clint Eastwood directed the major motion picture about Sullenberger’s life, titled SULLY, based on Highest Duty. Tom Hanks starred in the lead role; Aaron Eckhart and Laura Linney co-starred. The film was released to critical acclaim in September 2016 and garnered four Broadcast Film Critics nominations and one Academy Award nomination. Highest Duty was republished that year as SULLY: My Search for What Really Matters.

Previous When the Lance Corporal Met His Match Against Gummy Bears
Next Nord Stream Pipelines Were Sabotaged, Officials Say