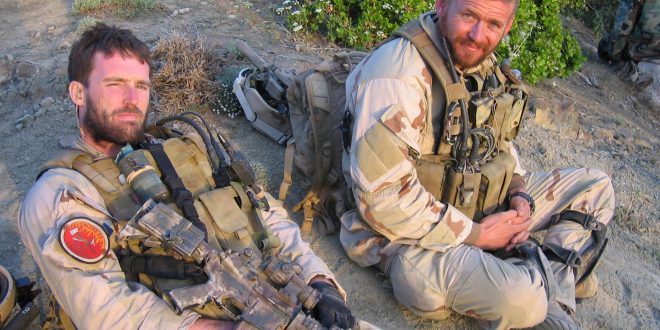 Navy file photo of SEAL Lt. Michael P. Murphy, from Patchogue, N.Y., and Sonar Technician (Surface) 2nd Class Matthew G. Axelson, of Cupertino, Calif., taken in Afghanistan. Both were assigned to SEAL Delivery Vehicle Team 1, Pearl Harbor, Hawaii. Murphy and Axelson were killed by enemy forces during a reconnaissance mission, Operation Red Wing, June 28, 2005. They were part of a four-man team tasked with finding a key Taliban leader in the mountainous terrain near Asadabad, Afghanistan, when they came under fire from a much larger enemy force with superior tactical position. U.S. Navy photo (RELEASED)

Suicide rates among active-duty military members are currently at an all-time highsince record-keeping began after 9/11 and have been increasing over the past five years at an alarmingly steady pace. In 2021, study found that 30,177 active duty personnel and veterans who served in the military after 9/11 have died by suicide – compared to the 7,057 service members killed in combat in those same 20 years. That is, military suicide rates are four times higher than deaths that occurred during military operations. For military families and parents, whose active duty loved one already sacrifices so much to protect our freedom, this trend is extremely troubling.

Suicide rates among the United States public have been increasing for the past twenty years, but among active military personnel and veterans of the post-9/11 wars, the suicide rate is even higher, outpacing average Americans. The “post-9/11 wars” refers to ongoing U.S.-led military operations around the world that grew out of President George W. Bush’s “Global War on Terror” and the U.S. invasion of Afghanistan in 2001.

Watson Brown Univ. research estimates 30,177 active duty personnel and veterans of the post 9/11 wars have died by suicide, significantly more than the 7,057 service members killed in post-9/11 war operations. These high suicide rates are caused by multiple factors, some inherent to fighting in a war and others unique to America’s “war on terror” framework. Partially, they are due to risks common to fighting any war: high exposure to trauma, stress, military culture and training, continued access to guns, and the difficulty of reintegrating into civilian life. In the post-9/11 era, the rise of improvised explosive devices (IED), the attendant rise in traumatic brain injuries (TBI), the war’s protracted length, advances in medical treatment that keep service members in the military longer, and the American public’s disinterest in the post-9/11 wars, have greatly contributed to increased suicide rates.

2 5 % were killed while serving in OCO operations—primarily in Iraq and Afghanistan. The remaining 75% died during operations classified in this In Focus as Non-Overseas Contingency Operations, or Non-OCO.

But going back to 9-11 the deaths were much higher in the earlier years.

But going back to 2001, An estimated 7,057 service members have died during military operations since 9/11, while suicides among active duty personnel and veterans of those conflicts have reached 30,177 — that’s more than four times as many.

The sheer length of post-9/11 military conflicts. The war in Afghanistan has been going on since 2001, the longest war in U.S. history is a factor according to an interview in NPR.

Retired Lt. Gen. Joseph Anderson agreed that the post-9/11 era was unique for the high number of deployments many service members faced during the protracted conflicts.

“The phenomenon of coming home, going into reintegration, watching units get taken down and rebuilt only to go deploy again,” he said, “that cycle over all these years is unprecedented.”

That wears on anyone over time, when you never quite know if you are in a quote-unquote safe environment or not,” he said.