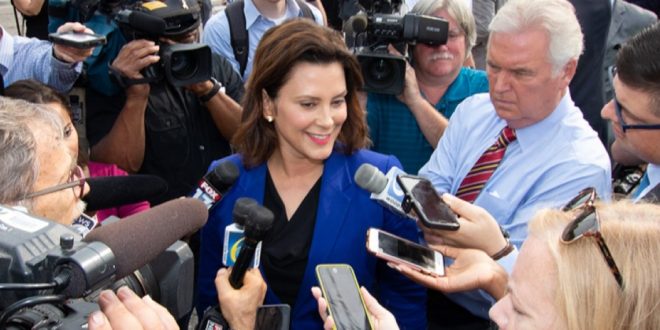 The cast of characters in the supposed plot to kidnap Michigan Governor Whitmer include unsavory FBI agents and a more unsavory informant. STEPHEN J. ROBESON, a convicted felon and FBI informant has been charged 20 December with fraud. He conned a couple into donating a vehicle for his fake race fighting organization focusing on chasing down child traffickers.

That combined with one FBI agent on the case had recently set up a private security business, another was accused of brutally beating his wife and another accused of perjury. All three were fired according to Buzzfeed investigations based on law enforcing records.

Reports indicate that Robeson was key in finding individuals who allowed themselves to be set up in the plot, organizing meetings that ended up being bugged by the FBI, and also paying expenses for the dupes to attend events which were created to give the illusion of an organized kidnapping scheme.
For a deep dive into current revelations see former police chief of Lawenforcement today reporting.

The Case.
Recent facts add up to a very questionable politically convenient kidnap plot.
Federal Grand Jury Charges Six With Conspiracy To Kidnap The Governor Of Michigan: Adds charge of use of weapon of mass destruction

A federal grand jury in Michigan returned a superseding indictment today that adds new charges of conspiracy to use a weapon of mass destruction against three defendants and adds federal firearms violations against two defendants in the case alleging a conspiracy to kidnap the governor of Michigan, Gretchen Whitmer.

According to court documents, Adam Fox, 40, of Wyoming, Michigan; Barry Croft Jr., 45, of Bear, Delaware; and Daniel Joseph Harris, 23, of Lake Orion, Michigan, are charged with knowingly conspiring to use weapons of mass destruction against persons or property in addition to the kidnapping conspiracy charged in October 2020. The superseding indictment further alleges that Fox, Croft and Harris intended to use the devices to destroy a nearby bridge, in effect, harming and hindering the governor’s security detail and any responding law enforcement officers.

The superseding indictment also alleges that on Sept. 13, 2020 in Lake County, Michigan, Croft and Harris knowingly possessed a destructive device that was not registered to them in the National Firearms Registration and Transfer Record as required by federal law. Harris is alleged to have possessed, between July 10, 2020 and Sept. 13, 2020, an Anderson Manufacturing, Model AM-15, .223/5.56 mm caliber semiautomatic assault rifle with a barrel of less than 16 inches in length, that was not registered to him.

Defendant Ty Garbin entered a guilty plea in December 2020 to the original indictment charging him with conspiracy to kidnap Governor Whitmer. Garbin faces up to life in prison for his conviction and awaits sentencing.

The new charges arise from an ongoing investigation conducted by the FBI, with valuable assistance provided by the National Security Division’s Counterterrorism Section, Bureau of Alcohol, Tobacco, Firearms and Explosives (ATF) and members of the Joint Terrorism Task Force, including the Michigan State Police.

An indictment is merely an allegation and all defendants are presumed innocent until proven guilty beyond a reasonable doubt in a court of law.

GRAND RAPIDS, MICHIGAN — United States Attorney Andrew Birge announced today that a federal grand jury has indicted six men on a charge of conspiracy to kidnap the Governor of Michigan, Gretchen Whitmer.  Adam Fox, Barry Croft, Ty Garbin, Kaleb Franks, Daniel Harris and Brandon Caserta each face up to life in prison if convicted. Fox, Garbin, Franks, Harris, and Caserta are residents of Michigan.  Croft is a resident of Delaware.  The six were previously charged by complaint, but under the United States Constitution, the government must present such a felony case to a grand jury and obtain an indictment to proceed with the prosecution.

The charges in an indictment are merely accusations, and a defendant is presumed innocent until and unless proven guilty in a court of law.

MANNER AND MEANS
In order to effectuate the object of the conspiracy, the defendants used means, facilities,

OVERT ACTS
In furtherance of the conspiracy and to effectuate its illegal object, the following overt

acts, among others, were committed in the Western District of Michigan and elsewhere:
1. On or about June 6, 2020, ADAM DEAN FOX and BARRY GORDON CROFT,

JR. met in Dublin, Ohio to discuss anti-government actions, including the kidnapping of state governors, and recruiting like-minded individuals to their cause.

2. On or about June 18, 2020, ADAM DEAN FOX met TY GERARD GARBIN, a leader of the Michigan-based “militia” group called the Wolverine Watchmen, at a rally outside the State Capitol in Lansing. ADAM DEAN FOX invited TY GERARD GARBIN and other Wolverine Watchmen members to meet him in Grand Rapids, Michigan, with the intent to recruit them into the conspiracy to kidnap the Governor.

3. On or about June 20, 2020, ADAM DEAN FOX met TY GERARD GARBIN and other Wolverine Watchmen members in Grand Rapids, Michigan, and proposed working together toward their common goals.

7. On or about August 23, 2020, TY GERARD GARBIN, KALEB JAMES FRANKS, DANIEL JOSEPH HARRIS, and BRANDON MICHAEL-RAY CASERTA met in Lake Orion, Michigan, where they examined each other’s identification documents in an attempt to verify that no members of the group were undercover law enforcement agents or informants.

8. On or about August 23, 2020, DANIEL JOSEPH HARRIS established a new encrypted messaging group for the conspirators, including TY GERARD GARBIN, KALEB JAMES FRANKS, DANIEL JOSEPH HARRIS, and BRANDON MICHAEL-RAY CASERTA, using a service he said would enable them to instantly delete their messages in case of federal law enforcement contact.

9. On or about August 29, 2020, ADAM DEAN FOX conducted a daytime surveillance of the Governor’s vacation home, and drew a map on which he noted approximate distances from the home to police first responders.

10. In an encrypted message on about August 30, 2020, TY GERARD GARBIN suggested that taking down a highway bridge near the Governor’s vacation home would hinder a law enforcement response, and offered to paint his boat black for a future nighttime surveillance trip.

12. From the night of September 12, 2020 into the early morning of September 13, 2020, ADAM DEAN FOX, BARRY GORDON CROFT, JR., TY GERARD GARBIN, and KALEB JAMES FRANKS conducted a nighttime surveillance of the Governor’s vacation home and a nearby public boat ramp, using two-way radios and a night-vision scope.

13. On the way to the nighttime surveillance of the vacation home on September 12, 2020, ADAM DEAN FOX and BARRY GORDON CROFT, JR. stopped to inspect the underside of a highway bridge near the vacation home for a place to mount an explosive charge.

14. During the field training exercise near Luther, Michigan on September 13, 2020, BARRY GORDON CROFT, JR. detonated an improvised explosive device containing shrapnel, near human silhouette targets hung by the conspirators to assess its effectiveness.

15. On or about September 13, 2020, ADAM DEAN FOX ordered $4,000 worth of explosives from an undercover FBI agent posing as a co-conspirator.

16. In an encrypted communication on or about September 17, 2020, ADAM DEAN FOX, TY GERARD GARBIN, BRANDON MICHAEL-RAY CASERTA, and KALEB JAMES FRANKS agreed to decline participation in a public rally at the State Capitol in Lansing, Michigan, and concurred that it was important to keep a low profile “if we want to continue with our plans.”

18. On or about October 7, 2020, BRANDON MICHAEL-RAY CASERTA instructed his co-conspirators in an encrypted video message that if they encountered police during a reconnaissance, they should give the officers one opportunity to leave, and kill them if they did not comply.

19. On or about October 7, 2020, ADAM DEAN FOX, TY GERARD GARBIN, KALEB JAMES FRANKS, and DANIEL JOSEPH HARRIS drove to Ypsilanti, Michigan, to meet the undercover FBI agent posing as a co-conspirator, and use the “group cash” for a good- faith payment towards explosives and other supplies.

Previous Kentucky Guardsman jumps into action after tornado devastated Kentucky
Next The Manhunt, the Battle Journal of a Company Commander Dec. 2003