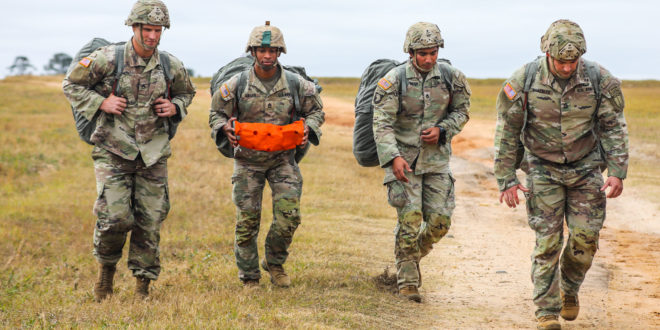 Paratroopers jump into the holidays

Soldiers from the 1st Battalion, 507th Parachute Infantry Regiment, Airborne and Ranger Training Brigade, along with qualified paratroopers from across the installation joined their counterparts from Canada and Australia in collecting toys for Fort Benning Santa’s Castle Dec. 7.

According to Lt. Col. Isaac Lee Henderson, Battalion Commander, 1-507th, from Chiefland, Fl., this was a great opportunity for the Fort Benning community to help families in need over the holidays.

“This is an awesome mission. I’m one of those kids that grew up with a single mom that worked two or three jobs to allow us to have a decent Christmas,” said Henderson.

Carrie Kennedy, a volunteer at Fort Benning Santa’s Castle, expressed gratitude for the toys collected for the kids in the military community.

“We appreciate all the generosity and support from Fort Benning and the local community,” said Kennedy.

The 304 participating parachutists each brought a toy before participating in the international jump, led by jumpmasters from Fort Benning, Canada and Australia. Participants were awarded their foreign jump wings after completing the mission.

“The mission of the toy drop that we did a couple of days ago was to give a kid an awesome Christmas,” said Henderson as they delivered the toys to Santa’s Castle Dec. 11. “I love doing this!”

Established in 1986, Santa’s Castle provides toys to children of Fort Benning soldiers who are experiencing financial hardship during the holiday season.