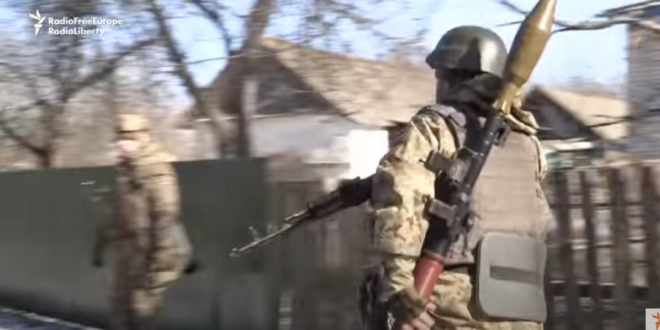 Third American May Be Missing While Fighting in Ukraine: State Department

A third American may be missing while fighting inside Ukraine, the U.S. State Department said.

The man was identified in news reports as former Marine Corps Capt. Grady Kurpasi, who joined the service after witnessing the Sept. 11 terror attacks in New York City

“There are reports of one additional American whose whereabouts are unknown,” State Department spokesman Ned Price said Thursday while addressing reporters. “I can’t speak to the specifics of that case. Unfortunately we don’t know the full details of that case.”

Price made his comments following reports that two Americans have disappeared and are feared captured after fighting in Ukraine.

The two men, U.S. veterans from Alabama, were in Ukraine to help defend against Russia. The men haven’t been heard from in days and are missing, members of the state’s congressional delegation said Wednesday.

“As of today, we have not raised this yet with the Russian Federation … (We) haven’t seen anything from the Russians indicating that two such individuals are in their custody,” Price told reporters on Thursday.

Relatives of the Alabama men – Andy Tai Ngoc Huynh, 27, of Trinity and Alexander Drueke, 39, of Tuscaloosa – have been in contact with both Senate and House offices seeking information about the men’s whereabouts.

“The US Embassy have assured me that they are doing everything they can to find him and that they are searching for him alive, not dead,” Lois Drueke told the British newspaper, the Telegraph. “I am doing my best not to fall apart, I am going to stay strong. I am very hopeful that they will keep him to exchange for Russian POWs.”

Rep. Robert Aderholt said Huynh had volunteered to fight with the Ukrainian army against Russia, but relatives haven’t heard from him since June 8, when he was in the Kharkiv region of northeastern Ukraine, which is near the Russian border. Huynh and Drueke were together, an aide to Aderholt said.

“As you can imagine, his loved ones are very concerned about him,” Aderholt said in a statement. “My office has placed inquires with both the United States Department of State and the Federal Bureau of Investigation trying to get any information possible.”

Rep. Terri Sewell said Drueke’s mother contacted her office earlier this week after she lost contact with her son.

Previous The Hunt is On For Two American Veterans Missing in Ukraine
Next Missing Americans Appear on Video, Alive in Captivity