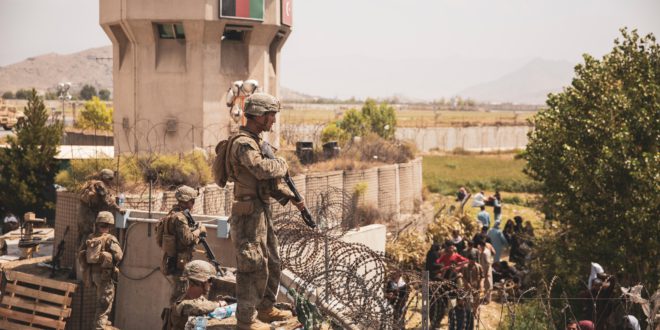 Afghan Interpreter Who Was Trampled at Abbey Gate Arrives in America

The Taliban murdered his son and threatened his family. The former interpreter evaded 12 enemy checkpoints, and now has been reunited with the American soldiers whose lives he saved in Afghanistan.

They started falling from the above and it took a second for Najeebullah to realize what they were: U.S. dollar bills. Coming from above his head in the baggage claim area of the Seattle, Washington, airport. Then he realized his friends were showering him with cash, a traditional Afghan celebration.

The reunion for Najeebullah was a long time coming. It started long before the United States pulled out of Afghanistan, leaving those with Special Immigrant Visas scrambling to flee.

In 2003, Najeebullah, then 24, started working as an interpreter for U.S. Special Forces during some of the most dangerous fighting in Afghanistan’s Nangarhar, Kunar, Kabul, Laghman, and Nuristan provinces. Better known to his friends as Najeeb, he was nicknamed “The GPS man” because he intuitively knew the terrain and how to avoid the enemy.

Najeeb’s last name has been withheld from this article to protect his family members still living in Afghanistan.

The White House had launched the invasion of Afghanistan as a response to the September 11, 2001, terrorist attacks, using airstrikes and troops to try to eliminate al-Qaida’s base of operations in Afghanistan.

The U.S. Congress approved the Special Immigrant Visa (SIV) program in 2009 for former interpreters who were in danger of retaliation for helping U.S. forces. The process was expected to take less than a year. But securing one of the highly prized visas can take several.

In Najeeb’s 2010 recommendation papers from commanders, a former officer described his “fearlessness” and wrote, “I have trusted him with my life in combat.”

Another complimented his “intimate knowledge of the Northern Konar and Nuristan provinces.”

A third wrote about his “personal courage under fire” and said it was his “distinct honor” to work with Najeeb. His former officer, Colonel Stuart Farris, told VOA, “If there was one we would do anything for, he’s the guy.”

“He stopped me from going into a compound because there was an [enemy] inside,” Coombs wrote.

In 2011, the Taliban kidnapped Najeeb’s 11-year old son, Khalid, and demanded $150,000 ransom from his father, whom they considered a traitor. Najeeb left his interpreter job. The son was returned in a rescue 15 days later. Najeeb thought he should prepare to leave Afghanistan to save the rest of his family, but for years he held out hope that the situation would improve.

That changed by 2017. Najeeb says decided to apply for his Special Immigrant Visa when he realized Afghanistan could not be rebuilt to give him the life he wanted for his family. But the most emotional toll was yet to come. In April 2021, his 25-year-old son, Shaid, was on leave from the Afghan army and was traveling to join his family on vacation. The Taliban killed him.

“That was a very hard time for me,” Najeeb said, lowering his head, “to receive his dead body.”

Najeeb then lived in fear for his own life as the Taliban tormented him with cellphone death threats, calling him an “infidel” for working with the Americans. VOA first reported his story in July 2021. Najeeb asked to use a fake name in the report for protection.

He choose “Haji,” a common name for those who have made the religious Hajj pilgrimage. VOA also disguised his voice and face. Najeeb had been traveling from city to city to escape the Taliban and their death threats.

“They tell me, they know my place, they know where I am staying, they are coming after me,” he said at the time.

In late August, the United States instituted “Operation Allies Refuge” to evacuate Afghans under threat by the Taliban who had taken over the country. Najeeb’s former officers networked to help his immediate family escape through the Pineapple Express, a volunteer group of veterans working apart from the U.S. government.

It was a harrowing experience. Najeeb joined the crowd at Abbey Gate leading to the Kabul Airport, waving his SIV application and watching for code words. Suddenly his toddler was knocked to the ground unconscious by the surging crowd. He reached down to protect her and the stampeding mob dislocated his shoulder. The family returned to their house.

The next night, on August 26, another group of Americans was in place to rescue them. Najeeb and his family were minutes away, walking to the Abbey Gate, when they heard an explosion and gunfire. Thirteen U.S. service members and numerous Afghans were killed in the suicide bomb attack. Najeeb would call it “one of the worst nights of his life.”

He and his family returned, dejected, to their permanent home in Jalalabad. Col. Farris recognized the low morale and texted him this message, “Do not give up hope, keep your faith in God. There will be more opportunities to get out.” Farris was right.

In January, Farris worked with the non-profit No One Left Behind and former officer Jason Coombs to get Najeeb and family to the Kabul airport and then onto a flight to Pakistan, where he would await approval of his SIV. They told him to get to Kabul, a difficult task for a wanted man. Najeeb says the journey involved circumventing or hiding inside the car to avoid detection at 12 Taliban checkpoints before safely reaching his flight.

Coombs says the family with five children was delayed in Pakistan by a Biden administration policy requiring COVID vaccinations of children.

“His medical costs and accommodations were $2,000,” says Coombs. “We had to wire the money and prove it was not fraud. It was an ordeal.” Next there were issues with flights out of Pakistan and No One Left Behind had to pay for the airline tickets. But finally in March, the visa was issued, the plane lifted off from Islamabad, and Najeeb felt enormous relief.

‘They will be free forever’

Najeeb’s Special Immigrant Visa extends to his family. He is designated as a cq1, meaning his visa allows him to apply for permanent U.S. residency, also known as a green card. After five years with the green card, he can apply for citizenship.

For now, the family of seven is living with a Seattle relative who also has five children. Wherever Najeeb walks in the house, the baby toddler he saved at the Abbey gate is glued to his side. She sleeps in his lap as he talks about his children’s future.

“My daughters for the last two years didn’t go to the school,” Najeeb explains, “because the Taliban … stopped the girls from going to the school, so they are very excited.”

Back in Afghanistan, he did not have any hope for their future or education. But living in the United States he says, “They can do anything they want, go anywhere they want, and be free forever.”

Previous Live Fire With US Navy SEALs: Rattlesnakes and Burning Flesh In the Desert
Next Ukraine Hunts for ‘Russian War Criminals, Politicians, and Propagandistsiv’: It’s in the Cards