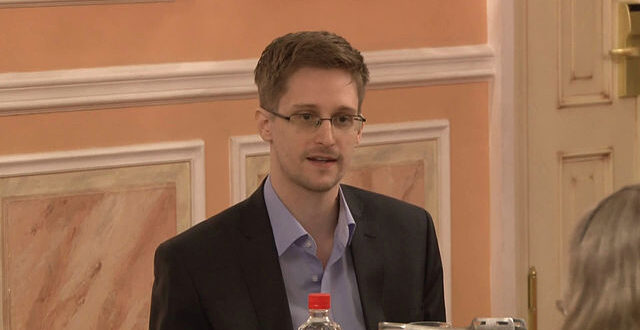 Will Edward Snowden Have to Fight in Ukraine, Now That He Swore Allegiance to Russia?

Will former U.S. intelligence contractor Edward Snowden soon be dragooned to take up arms against Ukraine, now that he swore allegiance to Russia?

An American citizen by birth, Snowden fled the United States in 2013 after he leaked secret government files from the National Security Agency. He took refuge in Russia, where he has lived while evading prosecution under the U.S. Espionage Act.

Vladimir Putin granted Russian citizenship to Snowden in September of this year, according to the Russian state news agency, TASS. Snowden, 39, swore an oath of allegiance to Russia, and was given a passport, his lawyer said on Friday.

“Yes, he received a passport. He took the oath,” lawyer Anatoly Kucherena told TASS, adding that he personally met with Snowden on December 1. Kucherena did not specify whether Snowden was given only an internal identification passport, or the external document that permits international travel.

By throwing in with Vladimir Putin in the midst of the war, will Snowden soon find himself slogging into the Ukrainian countryside alongside his new compatriots? Snowden has military experience. He reportedly enlisted in the U.S. Army in 2004 to be a Green Beret, but was injured and discharged within four months. Nevertheless, the four months would have given him substantially more military training than many of the Russian soldiers and prisoner-mercenaries currently fighting in Ukraine.

Will the Russian army soon come knocking on Snowden’s door?

Snowden is a significant “get” for Putin, who would not want to risk whatever benefits the American brings to Moscow. Snowden could volunteer, but would not be drafted. At age 39, he is too old to be conscripted under the regular system of calling up men between the ages of 18-27.

Snowden’s likely focus is on his family.

Lawyer Kucherena said that Snowden’s wife currently is submitting the documents to apply for Russian citizenship. Snowden and American acrobat and blogger Lindsay Mills married in Moscow in 2017.

Snowden’s US passport was annulled in 2013, but the White House said at the time that it was a routine legal procedure following the issuance of an arrest warrant.

Snowden faces two counts of violating the Espionage Act, and risks up to 10 years in prison on each count.

Susan Katz Keating is the publisher and editor-in-chief of Soldier of Fortune.

Previous Col. Nick Rowe: Long-Ago Conversations With a Special Forces Legend
Next This Afghan Soldier Fled the Taliban, Was Arrested While Seeking Asylum in US