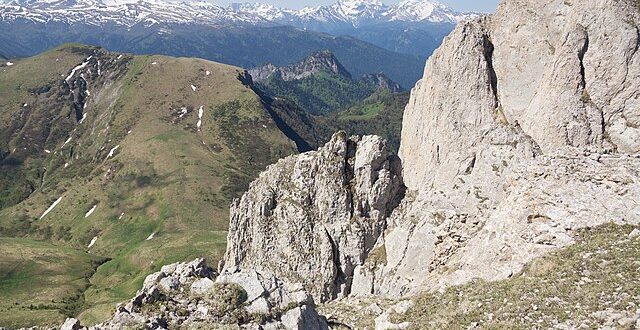 Escape Through the Mountains: Crossing Into Georgia to Flee Putin’s Draft

KAZBEGI, Georgia — The picturesque road that climbs vertiginously through the Caucasus Mountains leads to Stepantsminda, a small town where traditionally the stylish hotels serve as a starting-off point for holidaymakers, hikers, and the more adventurous climbers.

But if you drive farther, passing through Stepantsminda to the edge of Georgia, you come to the country’s mountain border with Russia. For the second time this year, Georgia has received an influx of Russians fleeing wartime Russia, following President Vladimir Putin’s announcement of mobilization on Sept. 21.

Unlike the Russians who had entered Georgia by air in the weeks immediately following Russia’s February invasion of Ukraine, the majority of the Russians arriving now come through the land border in the Caucasus Mountains. For many their first stop in Georgia is Stepantsminda, the main settlement in the Kazbegi municipality.

The demographic stands in stark contrast to the first wave of Russians, who, broadly, were young families and liberals. This time, it is mostly Russian men who don’t want to fight in Ukraine.

At the border, Russian volunteers wearing “Emigration For Action” lanyards handed out bottles of water, cups of instant coffee, snacks, and small pots of baby food to many of the Russians who had just crossed the border from the town on the other side, Verkhny Lars.

Some of the men I approached at the border refused to talk to me, but others were keen to explain what they’d been through to get here, and what they’d left behind.

One man, 35-year-old footballer Pyotr from Stavropol in southern Russia, had only a small backpack with sports shoes hanging by the laces. He had taken a train from Stavropol to Vladikavkaz, the capital of Russia’s republic of North Ossetia, where he bought a bike and cycled to the border. He’d abandoned the bike at passport control and set off on foot.

Pyotr told me that he was only planning on staying a short while in Georgia as he waited to see whether he could go back home, where he had left his pregnant wife. “If the situation gets worse and I can’t go back, then my wife will come here,” he said.

Two others, friends and colleagues from an engineering firm based in a Moscow suburb, said they’d left both of their wives and children at home, traveling south in their own car for five days until they reached the border with Georgia. For them, Georgia might not be their final destination. “We might go onwards to Turkey, but for now we have no idea,” one of the men said.

So far, there appears to be no plan in place from the Georgian government with how to deal with the migrant spike. Tbilisi’s housing market is still reeling from the first influx of Russians earlier this year, which saw rental prices double and sometimes even triple within weeks. Even for Ukrainians, the Georgian government on August 1 ended a program offering free housing in hotels to refugees.

It didn’t take long after Putin’s mobilization announcement for footage and images from the Russia-Georgia border to go viral, showing lines of cars backed up for several kilometers. Soon after, screenshots of Telegram channels, some likely real, others likely fake, began circulating, purportedly showing conversations between pro-war Russians on how best to ensure entry into Georgia. Georgians began sharing them with alarm, pointing to these conversations as evidence that the Georgian government’s open-door policy for Russians would leave the country at risk from warmongers and spies.

Georgian Interior Minister Vakhtang Gomelauri tried to allay these concerns, saying: “Russians have always entered Georgia and the previous government had no problem with that either…why should this become problematic today all of a sudden? There is, of course, a probability that it may grow, but maybe it won’t.” His consolatory effort didn’t appear to work. My own personal Facebook feed is filled with concerned posts by Georgian friends about how the country will cope with such a spike in Russian immigration.

For the first time since reporting on the fallout of the war in Georgia, I encountered a young Russian man who was sympathetic to Putin and the war against Ukraine. The man, who refused to give his name, told me, perhaps improbably, that the days he and his friends had spent in the line for the border had been an effort only to celebrate his 31st birthday in Georgia. “I don’t want to serve in the army. I’m pro-love,” he said. “I’m against all war, but this war is NATO’s fault. The West chose Ukraine as the site for their war. If I was called up, I don’t think I’d go to fight.”

On the drive back from the border, we passed a middle-aged couple who I’d earlier seen crossing from the Russian side, pushing their bicycles up a steep mountain pathway, their bags of belongings hanging from saddle bags.

We stopped in Stepantsminda to visit a number of hotels to see whether the rumors were true that they were all now full of Russian men. Almost all of the receptionists I asked confirmed that no rooms were available, and that the sudden lack of vacancies had occurred around the time of the mobilization announcement.

Leaving one hotel, I looked out through the terrace windows and overheard a Russian-speaking man calling out to someone. A few moments later, he bent down to catch his young daughter running towards him.

Share this article        The mountains above Bridgeport, California, have been home to mountain warfare survival …