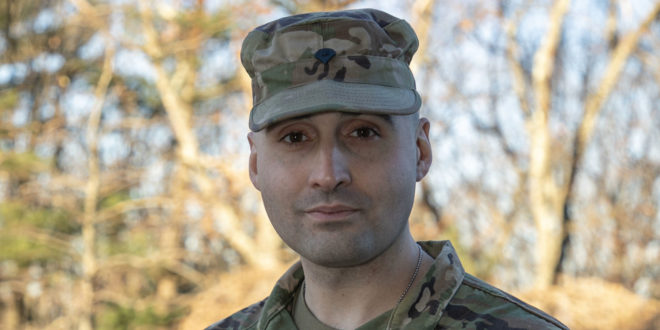 With only seconds to spare, Guardsman saved woman from her car that had burst into flames

STERLING, Mass. – Spc. Ryan Leger finished his drill with Massachusetts National Guard’s 110th Maintenance Company on Nov. 7, and his wife picked him up. As they were driving home, they noticed how nice the sunset looked. His wife, Courtney, a photographer, wanted to stop and take some pictures by the North Dike Wachusett Reservoir. “When we finished with the pictures, we walked back to our car and before I opened the door, rocks started flying, hitting my car,” said Leger. “I looked up to see an SUV going about 60-70 mph, actively trying to stop. The car swerved and side-swiped two vehicles, hit the guard rails on both ends down the road about three to four times, and hit another car with a family of five head-on and hit the guard rail one more time; finally stopping the vehicle.”

Once the vehicle was stopped, he said they saw flames start to come out of the engine and he immediately ran down as fast as he could towards the car. The family that got hit managed to get out of their vehicle and hop over the guard rail away from the burning vehicle. He reached the flaming car and opened the driver-side door, but the driver had hit the other vehicle so hard she flew into the passenger seat.

Leger said he asked if she was ok, and she did not respond. She was awake, just dazed.

“Noticing the fire was getting larger, I ran to the passenger-side door she was in, and the door was a bit bent. Luckily, I was still able to rip the door open and was able to pull the woman out of the car.”

As he was pulling the woman away, Leger said he could see the flames start to move to the inside of the car. It would have been too late to get her out if he had arrived a few seconds later. She finally stood, and he told her they needed to move away from the vehicle before it became worse. She still was not very responsive, so he picked her up and the fireman carried her further away from the car. A nurse driving by pulled over to help, and they moved the woman to the nurse’s car.

“As I put her in the back of the car, I looked over and at that point, the car was fully inflamed,” said Leger. “My wife at that point was on the phone with 911 to get help as soon as possible.”

Leger then started directing traffic away from the fire until first responders arrived. They put out the fire and got the rest of the people to safety.

“They all did an amazing job,” said Leger. “I’m just glad no one was seriously injured, and it’s a miracle really that no one did because of how severe that crash was.”

Spc. Leger joined the Massachusetts National Guard about three years ago as a generator technician and is thinking of switching to the infantry. He joined to serve and protect in any way possible, both state-side and overseas. It was always a goal of his to be in the military.

“I started a little later in my mid-20s, but since joining, I have been kicking myself that I had not signed up right out of high school.”

Leger said he had been fascinated by the military since he was a kid and will always be grateful to be a part of it. His favorite part about his short time in the military has been serving in his community, such as being called in for tropical storms in the area, helping with pandemic missions and spending half a year at our Nation’s Capital.

“It has been quite the ride so far, and I wouldn’t have it any other way,” said Leger. “I know when the next mission is sent out, I’ll be throwing my hat in to serve.”

Leger said he believes his military training helped him with the rescue.

“I feel like it left its mark in me never to leave anyone behind and to be there first for either your fellow Soldier or citizen,” said Leger. “The training we receive has brought out the best of myself.”

“I’m not saying this to promote our branch of the military, but if you want to make a difference in today’s world, have a good career with multiple opportunities, or if you want to see the best version of yourself, sign up for the Guard,” said Leger. “It’s done wonders for my family and me, and I know it could do the same for anyone else in our country.

“I had the most blessed opportunity to be able to adopt both of my wife’s kids, my daughter Svea and my son Laeth,” said Leger. “They may not have been mine from the beginning, but it feels like they have been since the day I met them.”

Leger said he has since heard from the woman he rescued, and she said she is doing better and grateful to have a second chance.

“I’m not sure what would have happened if we weren’t there. As weird as it sounds, it felt like a second instinct. I wasn’t nervous. I wasn’t scared. The only thing that went through my mind at the time was ‘you need to get them out of there now.”

Previous White House, DHS Mayorkas on the Warpath Against “Domestic Terrorists”
Next The Battle: Aug. 28, 2013 | Forward Operating Base Ghazni