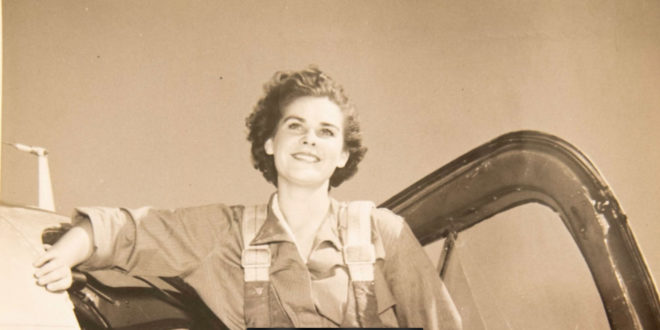 A photo of Lorraine Vogelsang, a Women’s Army Corps veteran, climbing out of an aircraft during her time in the service is displayed at her home in Cincinnati, Ohio Aug. 19, 2021. Vogelsang served in the WAC from February 1943 until August 1945.

It doesn’t seem real to be turning 100,” Lorraine Mulvaney Vogelsang said. “I’ve seen a lot in my lifetime, but it seems that the time goes so fast for the young people, and even faster for the older people.”

Vogelsang, a native of Fairfax, Ohio, grew up the third of eight brothers and sisters during the Great Depression. Her father lost his job, and her mother would go hungry so the children could eat,

“We ate a lot of bologna in many different ways,” she said. “The butcher asked us once if that was all we ate.”

Vogelsong didn’t complete high school because her mother became ill and needed help with the children. When her mother got better, she began working at a local laundry facility as a hand-presser until she joined WAAC, the Women’s Army Auxiliary Corps.

Vogelsang served in the Women’s Army Auxiliary Corps from February to August 1943. In January 1943, President Franklin D. Roosevelt signed legislation dropping “auxiliary” from the name. On Aug. 11, she transitioned from the WAAC to the Women’s Army Corps, where she served until her separation in August 1945 with the rank of sergeant.Spotlight: Women’s History Month

She said her parents weren’t thrilled about her joining the military.

“Mom and dad weren’t too happy about it,” she recalled. “But they never did say they didn’t want me to go in.”

She left for basic training at Fort Oglethorpe, Georgia, from the train station in nearby Cincinnati, Ohio.

“I remember mom and dad taking me to the station,” Vogelsang said. “Once I got to the train, I couldn’t see them anymore and that was it. I was on my own.”

During training, Vogelsang remembers spending much of her time on the parade grounds.

“It was a huge circle with houses all around it that was used in the Civil War. It was turned into housing,” she said. “We occasionally would get shows or visitors to our base. In fact, one of the visitors was President Franklin Roosevelt, and we paraded for him.”

After four weeks of basic training, which included marching in parades, she worked as a military baker for seven months, a clerk for almost a year and a half, and a short stint as a butcher-in-training.

“When they were trying me out as a butcher, they taught us how to use the sharp knives and which ones to use on what parts of the carcass,” Vogelsang said. “Then, two men came in from a truck outside carrying a dead lamb, and that’s all I remember. I guess I passed out because I don’t remember anything else after that. I didn’t last very long in that job.”

After her time at Fort Oglethorpe, she went to Lubbock Army Airfield in Texas for the rest of her enlistment.

The military once put her image on a recruitment poster, she said. However, she doesn’t recall the poster ever being officially used because the war ended before it could be distributed.

After the war, Vogelsong married and had three children. As she celebrated her centennial birthday with her family, she had a tip for longevity.

“The key to reaching 100 is staying busy and keeping your body moving,” she said.

Previous The Battle off Samar: The Sacrifice of “Taffy 3” 25 October 1944
Next Belasio to remove statute of Founding Father Thomas Jefferson from NY City Hall