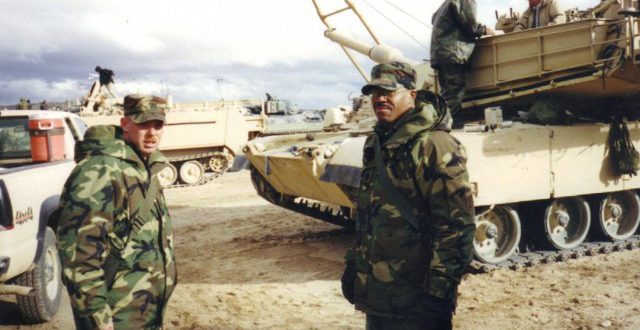 Shortly after the twin towers fell, King was reassigned to the NTC operations group’s “Cobra Team.”

Under the call sign Cobra 07T, King ran units through drills at mock operating bases and Iraqi villages to certify their tactics, techniques and procedures before being deployed overseas, Wickes said.

King was the epitome of a tank noncommissioned officer and considered an undisputed master of the Cobra tactical analysis feedback facility, retired Lt. Col. R.J. Bashista shared on King’s obituary webpage, adding the team was amongst the best due to his commitment and oversight…

King received orders to Iraq, where he would serve as the first sergeant in charge of over 100 Soldiers.

King was a member of Charlie Company, one of the best companies in the battalion due to the strong leadership of King and then-Capt. Stefan McFarland, said Maj. Gen. Patrick J. Donahoe, commander of the Army Maneuver Center of Excellence and Fort Benning, Georgia.

“First Sgt. King was a leader who led by example,” said Donahoe, his former battalion commander. “He wasn’t going ask anybody to do anything he wasn’t willing to do himself. That is the kind of Soldier the Army looks for in both noncommissioned and commissioned senior leaders.”

Nicknamed the “Carnivores,” Charlie Company was one of two tank companies within the battalion operating in the highly contentious area of Jurf As Sakhir near Baghdad, Donahoe explained. Time and time again, the company proved its ability to maneuver through the complex and restrictive terrain to take the fight to the enemy.

“Charlie Company and 1st Sgt. King were in the fight, every day,” he said. “There was a little panache with the company,” corresponding with their unofficial motto — “‘Stay alive and kill [stuff].’ They were combat-hardened and the most lethal company we had.”

His final trip to Iraq.

One month before his scheduled return home, Staff Sgt. Joseph M. Kane, Cpl. Timothy J. Lauer and the first sergeant were all killed after an improvised explosive device detonated under their Humvee while on a convoy outside of Baghdad.

‘A Journal for Jordan’ Brings Soldier’s Story of Love, Legacy to Life

When Dana Canedy gave Army 1st Sgt. Charles M. King a journal in late 2005 to write a few words of advice to their unborn son, she said she expected only a page or two from her shy, reserved fiance.

King, a nearly 20-year veteran of the force by this time, was heading off on yet another overseas deployment, his last before retirement. Canedy, who was a few months pregnant, wanted to have the words “I love you” written on a page beside King’s name, just in case something happened.

What Canedy got was page after page of loving insight that she and their son, Jordan, would hold dear for the rest of their lives. King’s words went on to inspire a bestselling book called “A Journal for Jordan,” with a movie of the same name being released Christmas 2021.

“The minute I opened [the journal] and started reading it, I knew it was going to be something special,” Canedy recently recalled.

Jordan was born in early 2006 while King was on deployment in Iraq. King’s commitment to his men in the field kept him from making it for the birth, but he was able to come home for two weeks to meet his 5-month-old son. While he lapped up every moment he had with the boy, King also continued writing.

“He became obsessed with this journal,” Canedy said. “He wrote 200 pages, most of it from Iraq, about the power of prayer and how to choose a wife. He made an exercise program for [Jordan]. He told him why he loved me [and] why he wanted a son.”

There were anecdotes about the beauty of rainbows after rainstorms, as well as themes he touched on repeatedly: his pride in military service and how he expects Jordan to respect women.

“And on the last page,” Canedy said, “he essentially wrote a letter that said, ‘This is everything I could think of to teach you to be a man if I don’t make it home.'”

On Oct. 14, 2006, their worst nightmare came true. King was in a convoy near Baghdad when a roadside bomb exploded, killing him. Just like that, King’s journal was one of the few items left that Canedy’s son had of his father.

To get through the grief, Canedy, who had been a journalist at The New York Times for a decade at that point, took to doing what she knows best – writing.

“After Charles’ funeral, I went back to work, and I was like, ‘I just can’t sit here as though this didn’t happen. I have to do something,'” Canedy said. “I thought, ‘I want people to know about him. I want them to know about the journal, but I also want them to know what it’s like when you get that knock at the door.’ So, I wrote about it first in The New York Times as a story. Then one of my colleagues sent me a note saying, ‘Our readers will demand a book.’ And that’s what happened.”

Within a year, Canedy released “A Journal for Jordan: A Story of Love and Honor.” It quickly became a bestseller.

Thirteen years later, that tragic story of love, loss and legacy has blossomed onto the big screen. Directed by Denzel Washington, the Sony Pictures film “A Journal for Jordan” features Michael B. Jordan as King and Chante Adams as Canedy.

Bringing Their Love to Life

Canedy was a producer on the film and was involved in nearly every aspect of it, including screenwriting and editing. She spent time on set and worked with Washington to get the smallest of details right, including the kind of car King drove and the moment she realized she was in love with him.

“The first day we went to the set, I took a small duffel bag that had Charles’ Purple Heart in it. It had his dog tags, and it had the actual physical journal and some other items to give [the actors] a sense of us – of who he was – to remind them that there was a real soldier behind the story,” Canedy said. “For everybody there, it touched them deeply.”

King grew up in Mobile, Alabama, and was nearly 30 when he enlisted in the Army in 1987. He’d spent his years prior as an artist after training in pointillism at the Art Institute of Chicago. Through his many deployments, which dated back to the 1991 Gulf War, he continued with that artistry.

“He drew babies. He drew old people. He drew soldiers. He just loved it. It was a form of therapy and relaxation for him,” Canedy said. “We’re really fortunate that Jordan, for the rest of his life, will have his father’s art.”

One of those pieces is featured in the movie.

“There’s a scene early on where it pans to a wall, and there’s a framed picture of an angel,” Canedy said. “That is actually his original piece.”

The anecdotes and items Canedy brought to the set helped make it personal to the cast and crew, and she said that really translated onscreen.

“It’s more accurate than I actually would have imagined,” she said of the movie. “It’s absolutely beautiful.”

Jordan, who is now 15, was introduced to the journal when he was young. Canedy said she put it away for a few years so he could be a kid, but when he started asking questions, she pulled it out again. She called it a family heirloom that’s not just a journal – it’s an ongoing conversation with his father.

“I think he understands it in a way that a 15-year-old boy does, but I think he will understand it at a different level when he’s 30 years old, depending on where he is in his life, and also when he’s 50, when he’s 60,” Canedy said. “That’s the beauty of this. It’s going to mean different things at different points of his life, as it does to me.”

Canedy said she hopes the film will help anyone who’s fighting to get through tragedy.

“The day he died, I collapsed on the hardwood floor screaming, and I didn’t know how I was ever going to get up,” Canedy said. “I hope the movie might offer some hope for anybody who may be struggling with something in their own lives that you can get through it in time.”

Canedy said that, over the years, soldiers and civilians have told her how the journal and her memoir inspired them to start writing, too. What she really hopes, though, is that by sharing her story, she’s helping to tell the tale of all military families and the sacrifices they make every day.

“I’ve heard from so many military families across the country who’ve said, ‘Thank you for helping folks to understand what it’s like to live this life and to have this kind of commitment to our country,'” she said. “The reactions from people all over the country and all over the world, really, have been unbelievable.”