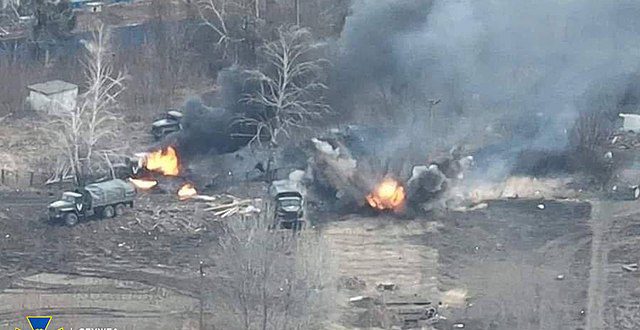 A ‘Dynamic Fight’ Rages as Russia, Ukraine Claim to Prevail in Battle for Soledar

Both Russia and Ukraine have claimed to prevail in the fierce battle for Soledar, in eastern Ukraine.

Ukrainian Deputy Defense Minister Hanna Malyar said Thursday that fighting was intense in Soledar, but that Ukraine’s forces were holding on.

Yevgeny Prigozhin, who runs the Russian mercenary group Wagner, said his forces had captured the city.

The Kremlin, however, urged caution, saying that while there had been a “positive dynamic in advances,” there should be no rush to declare victory and instead wait for “official information” on the situation.

A source outside the town told Soldier of Fortune the situation is difficult to accurately assess.

“Even the Kremlin says it’s too soon to say, and normally they are quick to claim victory,” said that source, a Polish citizen who is inside Ukraine to deliver humanitarian aid.

Satellite imagery of Soledar released by Maxar Technologies on January 11 showed a city devastated by weeks of intense fighting.

The U.S. Defense Secretary Lloyd Austin on Wednesday called the battle “a very fluid, dynamic environment, dynamic fight” amid reports that it had fallen to the Russians.

“At this point, we can’t corroborate that reporting,” Austin said in joint press briefing with Secretary of State Antony Blinken and their Japanese counterparts at the State Department.

Yevgeny Prigozhin, the head of Russia’s mercenary Wagner Group, said Wednesday his forces had captured all of the mining town and killed 500 Ukrainian troops in heavy fighting.

The Russians “are trying to pretend that part of our town of Soledar … is some sort of a Russian possession,” he said in a video address. “But fighting continues. The Donetsk theater of operations is holding.”

In a statement on Facebook, the Ukrainian general staff said Russian forces were suffering heavy losses. Russia has been trying to capture the salt-mining town since August because of its salt caverns and proximity to Bakhmut.

The area is one of the most active in the conflict, making it difficult for an independent assessment of the situation.

A Reuters photographer who recently reached the edge of Soledar said she could see smoke rising over the town, and the incoming artillery fire was relentless, Reuters reported. Ambulances were waiting to receive the wounded on the road from Soledar to Bakhmut.

Also Wednesday, Russia’s Defense Ministry announced that General Valery Gerasimov, the chief of the general staff, was taking over command of the forces in Ukraine. General Sergei Surovikin, who had held the job for three months, will now be Gerasimov’s deputy.

Britain’s Defense Ministry said the move is “an indicator of the increasing seriousness of the situation Russia is facing, and a clear acknowledgement that the campaign is falling short of Russia’s strategic goals.”

It added in a tweet that Russian ultranationalists and military bloggers critical of Gerasimov are likely to greet the news with “extreme displeasure.”

With reporting from VOA and RFE/RL.

Previous The Gruesome Fate of Surgeons Who Built New Face For Mexican Drug Lord
Next A Strange, Spectral Quiet Spooked Our Team in Afghanistan – Was It a Ghost?