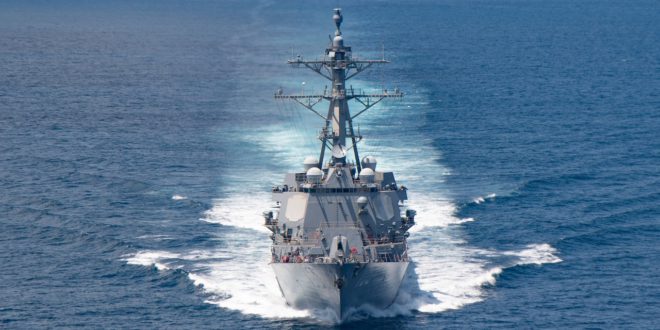 DOD to Taiwan: We’ve Got Your Back, DOD to China: Back Off

Since October 1, more than 100 Chinese military aircraft have moved provocatively through the air defense identification zones of nearby Taiwan — just over 100 miles to the east. Those military maneuvers serve only to create uncertainty in a part of the world where the U.S. wants to see stability and peace, Pentagon Press Secretary John F. Kirby said.

“The PRC [Peoples Republic of China] has stepped up efforts to intimidate and pressure Taiwan and other allies and partners, including increasing their military activities conducted in the vicinity of Taiwan, the East China Sea and the South China Sea, which we believe are destabilizing and only increase the risk of miscalculation,” Kirby said during a briefing today at the Pentagon.

Despite the recent Chinese show of force, Kirby said the U.S. remains committed to keeping the Taiwan Strait a peaceful region.

“We will continue to support a peaceful resolution of cross-strait issues, consistent with the wishes and best interests of the people of Taiwan, and our commitment to Taiwan is rock solid and contributes to the maintenance of peace and stability across the strait and within the region,” Kirby said.

Kirby also said that the U.S. is interested in ensuring that Taiwan continues to be able to defend itself.

“We have an abiding interest in peace and stability across the Taiwan Strait and that’s why we’re going to continue to assist Taiwan in maintaining a sufficient self-defense capability,” he said.

Kirby said the department would like for Beijing to honor its own commitments to peace and stability in the region.

“We’re urging Beijing to cease this military, diplomatic and economic pressure, and the coercion against … Taiwan,” he said.

From the Press Conference:

Q:  Hi, John.  On Taiwan have there been continued incursions into Taiwan’s (inaudible) and it seems like tensions seem to continually be escalating between Taiwan and China and potentially U.S. and China.  How concerning is this and is the secretary planning to do any sort of outreach to his Chinese counter parts to may try and deescalate the situation?

MR. KIRBY:  Well, you’re right, the PRC has stepped up efforts to intimidate and pressure Taiwan and other allies and partners; including increasing their military activities, conducted in the vicinity of Taiwan, the East China Sea and the South China Sea; which we believe are destabilizing and only increase the risk of miscalculation.

Our support for and defense relationship with Taiwan remains aligned against the current threat posed by the people’s Republic of China and we urge Beijing to honor its commitment to the peaceful resolution across straight differences as delineated in the three communiques.

As for communication, I — I have nothing on the secretary’s schedule to announce or speak to today with respect to direct communication with — with the Chinese.  Although you know a week or so ago there was a — there was a meeting here in the Pentagon at the deputy assistant secretary defense level.

And of course we have other ways of — of communicating military to military but I have nothing from the secretary’s schedule to — to read out.

Q:  And just a quick follow-up on that.  Is the Department looking at whether or not if any actions were taken to defend Taiwan it would require congressional approval?  Would it require Congress providing authorization?  Would this be considered a war powers act authorization need to act in defense of Taiwan?

MR. KIRBY:  Well, I wouldn’t get into hypotheticals here.  I mean we — we act in accordance with the One China policy and we’ve long abided by that policy, you know, and it’s distinct from Beijing’s one China principle under which the Chinese communist party asserts sovereignty over Taiwan.

We take no position over the sovereignty of Taiwan — on sovereignty over Taiwan.  We — but we will continue to support a peaceful resolution across straight issues consistent with the wishes and best interest of the people of Taiwan and our commitment to Taiwan is rock solid and contributes to the maintenance of peace and stability across the straight and within the region.

Q:  John, I’d like to get your reaction to the ex Pentagon software chief saying that the U.S. has already lost the A.I. fight to China.

MR. KIRBY:  Yes, I mean what I would tell you is that, and you heard the secretary talk about this not long ago in his remarks on A.I. at the Global Emerging Technology Summit back in July.  And he was very clear about our concerns about China’s desires to advance in this field and he’s focused and we still remain focused on advancing A.I. capabilities in a responsible way, in close partnership with industry and academia and building a digitally talented and capable workforce here for the Department.

So those comments not withstanding and certainly he’s entitled to his views of course.  This is something that the secretary has spoken to that — that — that the entire leadership here at the Department has focused on.  We know there’s a lot of work to do but we’re committed to doing that work.

Q:  This was the Pentagon’s first software officer and he writes we have no competing fighting chance against China in 15 to 20 years.  Right now it’s already a done deal.  Is he wrong?

MR. KIRBY:  I’m not going to qualify or characterize his views.  I think he can speak to his views.  What I can tell you is that we recognize the importance of A.I. as — as a technology and as a capability and the secretary has spoken about this and we have — we have invested quite a bit of effort and — and energy into making sure that we can advance A.I. technology in a responsible way.

And some of that includes not only an ethical underpinning, but it includes getting a — a — a capable workforce set up here at the Pentagon. So what — I — what I can, again, reassert is — is our absolute focus on this.

Q:  Yeah, thanks, John. Real quick question, and then a follow-up on Taiwan. Is there an update on force posture review when that might be released?

MR. KIRBY:  I don’t have a specific calendar date to speak to today.

Q:  And specific to Taiwan, that was a major show of airpower from China and encouraging them to Taiwan’s air — air zone. Is there specific assistance to Taiwan that you’d like to comment on in terms of its air defenses?

MR. KIRBY:  No. I don’t think you can understand. I wouldn’t get into specifics about air defense capabilities. But we do remain concerned by the PRC’s provocative military activity near Taiwan, as — which, as I said to Tara is we find destabilizing and increasing the risks of miscalculation. So we’re urging Beijing to cease this military diplomatic and economic pressure and the coercion against the Taiwan. We have an abiding interest in peace and stability across the Taiwan Strait, and that’s why we’re going to continue to assist Taiwan in maintaining a sufficient self-defense capability.

Q:  Anything changing because of that in terms of…

MR. KIRBY:  I wouldn’t speak to that here from the podium one way or the other. As I said, we remain committed to helping Taiwan with their self-defense capability in keeping with — in keeping with the law.

Previous Bea Arthur, one of the first women to join the Marines, WWII
Next Eye For An Eye