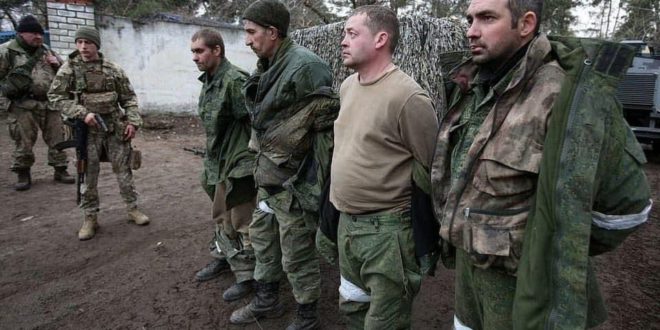 The U.S. ambassador to the Organization for Security and Cooperation in Europe (OSCE) says there is credible evidence that Russian forces have been rounding up people in areas of Ukraine’s south and east and detaining them in “filtration camps,” where they are interrogated.

Ambassador Michael Carpenter told the Permanent Council of the OSCE on April 28 that there had been “credible reporting” that Russia’s forces are detaining people in these regions and “brutally interrogating them for any supposed links to the legitimate Ukrainian government or to independent media outlets.”

There also have been “alarming reports” that people suspected of having such connections are beaten or tortured before being transferred to the Donetsk region, “where they are reportedly disappeared or murdered,” Carpenter told the council, according to a text of his statement.

“Our information indicates Russia is abducting, torturing, and/or murdering locally elected leaders, journalists, and civil society activists, as well as religious leaders,” Carpenter said at a council meeting in Vienna.

He said the Mariupol mayor’s office reported that four filtration camps are operating in the city and that accounts from these camps are “harrowing.”

He cited one example of an escapee who described the filtration camps as “like ghettos.” The escapee said the Russians divide people into groups including those having connections with the Ukrainian Army or the Territorial Defense Force, as well as journalists and government workers.

He warned said Western countries should expect Russia to intensify the forced transfers of Ukrainians via filtration camps.

Carpenter also said Russia may be planning to stage “sham” referendums in an attempt to “legitimize” its invasion and assert control over areas in the south and east that it has claimed.

“These falsified, illegitimate referenda will undoubtedly be accompanied by a wave of abuses against those who seek to oppose or undermine Moscow’s plans,” the U.S. ambassador said.

Ukrainians in cities such as Kherson have warned that Russia may soon stage a referendum there asking residents if they approve of the “independence” of an entity called the “Kherson People’s Republic,” he said.

“Of course, no such entity exists outside of the Kremlin’s web of lies,” he said. “And the international community must make clear that any such referendum will never be recognized as legitimate.”

Carpenter said the reports bring back “horrific memories of a bygone era” and said the international community must act with a greater sense of urgency to stop these acts.

Kherson is the only regional capital Russia has captured so far. Russian troops there used tear gas and stun grenades on April 27 to quell a pro-Ukrainian rally.

Ukrainian officials reported explosions overnight in the city and on April 28 shelled the entire surrounding region and launched attacks toward Mykolayiv and Kryviy Rih.