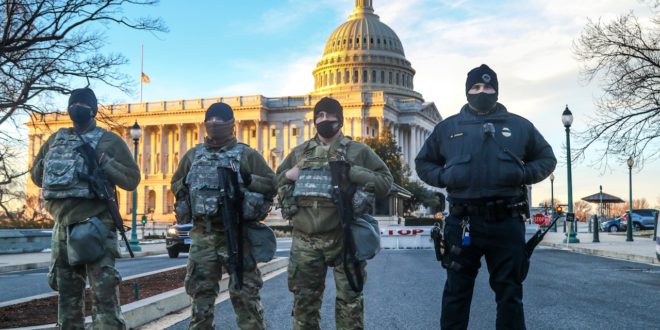 Contrary to reports that Trump’s DOD acted irresponsibly in the days leading up to 6 January and on the day of the Capitol breach, the Inspector General, after a lengthy investigation and interviews concluded that the Pentagon acted appropriately.

REVIEW OF THE DEPARTMENT OF DEFENSE’S
ROLE, RESPONSIBILITIES, AND ACTIONS TO PREPARE FOR AND RESPOND TO THE PROTEST AND ITS AFTERMATH AT THE U.S. CAPITOL CAMPUS ON JANUARY 6, 2021

DoD did not plan for the anticipated January 5 and 6, 2021, election protests until the DCNG received the D.C. government’s RFA. They said that there were no contingency plans for conducting CDOs in D.C. because the DoD acts only in response to specific requests from civil authorities

This report presents the results of the DoD Office of Inspector General (OIG) review of the DoD’s role, responsibilities, and actions to prepare for and respond to the protest and its aftermath at the U.S. Capitol Campus on January 6, 2021.1

The DoD Acting Inspector General initiated this review on January 15, 2021. Our review evaluated requests for DoD support before January 6, 2021, how the DoD responded to such requests, the requests for support the DoD received as the events unfolded on January 6, 2021, and how the DoD responded to the protests and rioting at the U.S. Capitol Campus. We evaluated whether the DoD’s actions were appropriate and supported by requirements. We also examined whether the DoD complied with applicable laws, regulations, and other guidance in its response to requests for assistance.

We concluded that the actions the DoD took before January 6, 2021, to prepare for the planned protests in Washington, D.C., on January 5 and 6, 2021, were appropriate, supported by requirements, consistent with the DoD’s roles and responsibilities for DSCA, and compliant with laws, regulations, and other applicable guidance.

We also examined the actions the DoD took before January 6, 2021, that were independent of the D.C. RFA. We looked for a role or responsibility for the DoD to act preemptively to prevent or deter what later happened at the Capitol. We found none. On the contrary, we found restrictions that limited the DoD’s roles and responsibilities in planning and providing support for domestic civil disturbance operations (CDO). These restrictions, set forth in statutes and implementing DoD directives, do not limit what civil authorities can request, but rather mandate what support DoD can provide to civilian authorities by setting strict limits.

Conclusions on DoD Actions On January 6, 2021

We concluded that the DoD’s actions to respond to the USCP’s RFA on January 6, 2021, were appropriate, supported by requirements, consistent with the DoD’s roles and responsibilities for DSCA, and compliant with laws, regulations, and other applicable guidance. In particular, we determined that the decisions made by Mr. Miller, Mr. McCarthy, and other senior DoD officials, and actions taken by the DoD in response to the civil disturbance at the U.S. Capitol Campus on rortJanuary 6, 2021, were reasonable in light of the circumstances that existed on that day and requests from D.C. officials and the USCP.

The events leading up to the 2020 presidential election are important to the January 6, 2021 fact pattern we reviewed because witnesses told us that previous events influenced the DoD response to RFAs pertaining to civil disturbances before and on January 6, 2021. After the May 25, 2020 death of Mr. Floyd while in police custody in Minneapolis, Minnesota, cities throughout

D.C., entered a similar period of demonstrations and rioting that lasted into June 2020.

Protests occurred throughout downtown Washington, D.C., on May 30, 2020, including vandalism of monuments on the National Mall. These protests continued on May 31, 2020, and a number of businesses were looted. Based on the civil unrest, the former U.S. AG characterized the day as “the most violent day of civil unrest in the District in 30 years.”

Mayor Bowser ordered a 7:00 p.m. curfew for Washington, D.C., on June 1, 2020. During the early evening, Federal law enforcement officers cleared Lafayette Square of protesters before the President spoke at the nearby St. John’s Episcopal Church. Although mobilized DCNG troops were present, they did not participate in the removal of protesters from Lafayette Square. Protests continued throughout that night and the DCNG deployed its available assets in force. It was during these events that a DCNG UH-72 medical evacuation helicopter was filmed hovering over a group of protesters.28 The recording was widely publicized in the news and on social media.29 One media outlet, Politico, reported, “The optics of the past 72 hours are putting people inside the halls of the Pentagon on edge as images of U.S. troops on the streets of the nation’s capital dominate airwaves across the globe.”

Mr. McCarthy described the June 2020 events as violent. He said, “It [the riot] turned very violent. They looted buildings. They spray painted monuments. They burned a church. Six of our [DCNG] Soldiers were injured and over the course of those 3 or 4 days about 100 policemen were injured.” Mr. McCarthy noted the public criticism of the DoD’s response. He mentioned the use of helicopters and added, “We had [DCNG] Soldiers in Lafayette Square where people thought they were engaging civilians because we had [loaned] military police shields to law enforcement officials. So there were [civilian] policemen … using military police shields and we spent days and weeks explaining to the media and the Congress those weren’t our guys.”30

An Army public affairs officer told us that the Army received calls complaining that active duty personnel were in the streets from May through June 2020 because they saw active duty unit patches on DCNG uniforms. The officer explained that this was a misunderstanding because “there are several National Guard and Reserve units that have deployed with active duty troops so they have those combat patches” on their right shoulder.31 In addition, some citizens thought Federal law enforcement officers who wore military-style uniforms were actually Soldiers. Other witnesses we interviewed said that the use of riot control agents and ISR aircraft were a concern to many in the DoD. According to Mr. McCarthy, the events of the summer led to congressional hearings and legislation on identifying personnel and other aspects of how DoD should operate in American cities.32

For the full report: