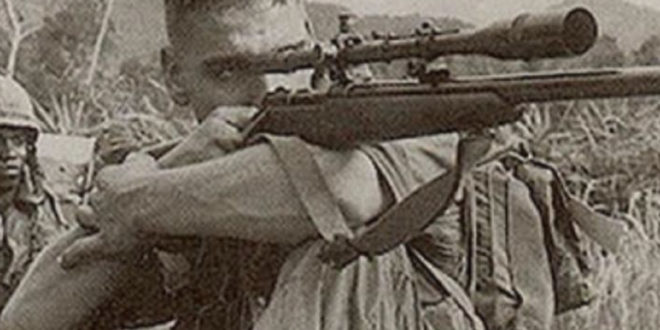 At a young age, Carlos Norman Hathcock II would go into the woods with his dog and the Mauser his father brought back from World War II to pretend to be a soldier. Hathcock dreamed of being a Marine throughout his childhood, and on May 20, 1959, at the age of 17, he enlisted.

In 1966, Hathcock started his deployment in South Vietnam. He initially served as a military policeman and later, owing to his reputation as a skilled marksman, served as a sniper.

During the Vietnam War, Hathcock had 93 confirmed kills of North Vietnamese Army (NVA) and Viet Cong personnel. However, kills had to be confirmed by an acting third party, who had to be an officer, besides the sniper’s spotter. Hathcock estimated that he actually killed between 300 and 400 enemy soldiers.

In one instance, Hathcock saw a glint reflecting off an enemy sniper’s scope. He fired at it, sending a round through the enemy’s own rifle scope, hitting him in the eye and killing him.

Hathcock’s notoriety grew among the Viet Cong and NVA, who reportedly referred to him Du kích Lông Trắng (“White Feather Sniper”) because of the white feather he kept tucked in a band on his bush hat. The enemy placed a bounty on his head. After a platoon of Vietnamese snipers tried to hunt him down, many Marines donned white feathers to deceive the enemy. Hathcock successfully fought off numerous enemy snipers during the remainder of his deployment.

Hathcock did once remove the white feather from his bush hat during a volunteer mission. The mission was so risky he was not informed of its details until he accepted it. Transported to a field by helicopter, Hathcock crawled over 1,500 yards in a span of four days and three nights, without sleep, to assassinate an NVA general. At times, Hathcock was only a few feet away from patrolling enemy soldiers. He was also nearly bitten by a snake. Once in position, Hathcock waited for the general to exit his encampment before shooting. After completing this mission, Hathcock came back to the United States in 1967. However, missing the service, he returned to Vietnam in 1969, taking command of a sniper platoon.

On September 16, 1969, an AMTRAC Hathcock was riding on struck an anti-tank mine. He pulled seven Marines from the vehicle, suffering severe burns in the process. Hathcock received the Purple Heart while he was recuperating. Nearly 30 years later, he received a Silver Star for this action.

After returning to active duty, Hathcock helped establish the Marine Corps Scout Sniper School at the Marine base in Quantico, Virginia. However, he was in near constant pain due to his injuries, and in 1975, his health began to deteriorate. After diagnosed with multiple sclerosis, he medically discharged in 1979. Feeling forced out of the Marines, Hathcock fell into a state of depression. But with the help of his wife, and his newfound hobby of shark fishing, Hathcock eventually overcame his depression. Despite being retired from the military, Hathcock continued providing sniper instruction to police departments and select military units, such as SEAL Team Six.

During the Vietnam War, Marine Gunnery Sergeant Carlos Hathcock (“White Feather”) became the most accomplished sniper of the era, with 93 confirmed kills and 300 probable kills, and many more enemy woundings.

That’s the snipers’ creed. U.S. Marine Gunnery Sergeant Carlos N. Hathcock became a military legend. In his first on camera interview he has ever granted, this American hero recounts the exploits that made him famous in-his-own-words. This film is digitized from an original VHS and introduced by

“The Ultimate Sniper” author Major John Plaster. He guides us through a fascinating hour-long interview with Gunny and this film lets you see first-hand, stories and tips from the most famous sniper of this era.