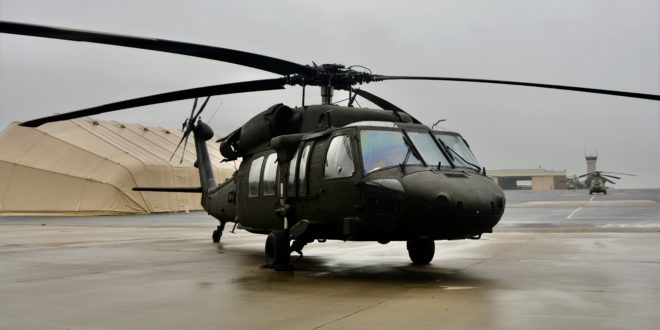 A UH-60V Black Hawk helicopter is parked on Muir Army Airfield for a ribbon-cutting ceremony for the new variant on Oct. 6, 2021, at the Eastern Army National Guard Aviation Training Site at Fort Indiantown Gap, Pa. EAATS was the first unit in the Army – active duty, National Guard or Army Reserve – to receive the new variant. (Photo Credit: Brad Rhen)

On the outside, the new UH-60V Black Hawk helicopters look nearly identical to previous variants of the UH-60.

It’s what’s on the inside that sets them apart.

The UH-60V – referred to as the “Victor” – was developed with to overhaul the aging UH-60A and L fleets. The new model has several technological advancements that make it easier to operate than older variants, including an upgraded digital glass cockpit, certified GPS RNAV database and advanced flight planning and mission capability.

The Pennsylvania National Guard’s Eastern Army National Guard Aviation Training Site at Fort Indiantown Gap received six Victors in July. Since then, over 20 instructor pilots at EAATS have become certified to teach other pilots how to operate them.

Chief Warrant Officer 4 Frank Madeira, an instructor pilot at EAATS, said the Victor is a major upgrade over previous variants.

“For the Guard, it’s going to be a big upgrade because of the digital interface,” he said. “Now everything is displayed on the screens. It’s all digital information that’s being pushed on the screen for you to look at, and they can move it to where they need it to be on the screen.”

Chief Warrant Officer 4 Justin Meyer, also an instructor pilot at EAATS and the UH-60V course manager, said transitioning to the Victor is relatively seamless for pilots who’ve flown both UH-60 A/Ls and UH-60Ms.

“The digital aspect, I think a lot of people grasp that quickly,” he said. “After a few flights, I think everyone feels fairly comfortable with flying the aircraft.”

One of the biggest upgrades, Meyer said, is a “time-ahead, time-behind” feature that calculates an estimated time of arrival based on the distance and the aircraft’s speed. The feature, which has been standard on smartphone apps and civilian GPS devices, wasn’t available on A/Ls, he said.

“You’re not going to be late with a mission, and you give yourself a hard time to get there,” he said. “The whole time, it’s telling you, ‘Hey, you’re this fast or you’re this slow.’”

“You can actually see every leg of your flight and how long it’s going to take you to get there by airspeed,” Madeira added. “The time-ahead, time-behind is phenomenal. It lets you know, ‘You’re 30 seconds behind. Speed it up.’”

Madeira said that the Victors’ software gets updated pretty regularly, and it’s easier to update than older variants.

Lt. Col. Timothy Zerbe, Pennsylvania’s state Army aviation officer, said the UH-60V is scheduled to undergo initial operational testing and evaluation next summer. This will validate the UH-60V program accomplishments and standards to move from low to full production.

In late October, four Illinois Army National Guard pilots became the first students to graduate from the UH-60V course at EAATS. They will return to their unit to train other pilots, and they will also take part in the IOT and E.

“The IOT and E is the test that certifies whether this aircraft can do what the Army needs it to do,” Zerbe said. “Once that’s determined, the Army will ramp up production.”

If all goes according to plan, the Pennsylvania National Guard is expected to receive 10 additional UH-60Vs, Zerbe said. They will most likely be assigned to C Co., 1-230th Assault Helicopter Battalion in Johnstown, he said.

“The UH-60V is a great aircraft,” Zerbe said. “The technological advancements it brings are a major upgrade to previous UH-60 models, and it will give the Army greater capabilities on the battlefield.”

The U.S. Army unveiled the newest variant of the UH-60 Black Hawk helicopter, the UH-60V, during a ceremony In Oct. at the Pennsylvania National Guard’s Eastern Army National Guard Aviation Training Site.

EAATS received six UH-60Vs from the Utility Helicopter Program Office in late July, and since then, the school’s instructor pilots have been training on the new variant as they prepare to begin training other students.

“The ‘Victor’ model will extend the Army’s capability and capacity to meet the demands placed on the joint force,” Pennsylvania Adjutant General Maj. Gen. Mark Schindler said at the ceremony. “Additionally, the model will ensure national security and support warfighters now and well into the future.”

EAATS, which is located adjacent to Fort Indiantown Gap’s Muir Army Airfield, was the first unit in the Army – active-duty, National Guard or Army Reserve – to receive the new variant.

“It’s fitting that our location was chosen to begin UH-60 Victor training,” he said. “The EAATS is an accomplished organization, proving time and time again to be a force multiplier for all components of the U.S. Army and our multi-national partners, unmatched in the Army enterprise.”

The UH-60V was developed with a focus to overhaul the aging UH-60A and L fleets. It includes an upgraded digital glass cockpit, certified GPS RNAV database and advanced flight planning and mission capability.

“Although early engagement in the design process enabled the incorporation of state missions into the 60 Victor, have no doubt the 60 Victor is purpose-built as a go-to-war aircraft, an aircraft capable of operating on any battlefield against any adversary,” Budraitis said.

EAATS has collaborated with numerous organizations to develop a training package for the UH-60V, including the National Guard Bureau; the UHPO; the Directorate of Evaluations and Standardization; Army Capabilities Manager-Lift; the Directorate of Training and Doctrine; and Army Test and Evaluation Command.

“The UH-60V’s digital cockpit provides Army aviators increased situational awareness across a wide spectrum,” said Russell, who has 21 years of experience as a Black Hawk pilot. “Whether using the GPS navigation capability in the national airspace system or flying tactical routes in the battlespace, the UH-60V’s integrated avionics package provides the necessary information for safe and efficient mission execution.”

“This modernized PVI (pilot vehicle interface) will be a force multiplier for the National Guard in its capabilities to support the full spectrum of warfighters across the digital integrated joint battlefield,” said Madeira, who has 18 years of experience as a Black Hawk pilot.

In the recently concluded 2021 fiscal years, EAATS provided training for about 180 pilots and about 630 enlisted Soldiers.

Lt. Col. Randy Lutz, commander of EAATS, said it is an honor and a privilege for EAATS to be selected as the first unit equipped and serve as the initial UH-60V training site for both the active component and the Army National Guard.

“The EAATS is a renowned training institution of excellence, and it’s no surprise that the Aviation enterprise has selected the EAATS to spearhead this initiative,” Lutz said.