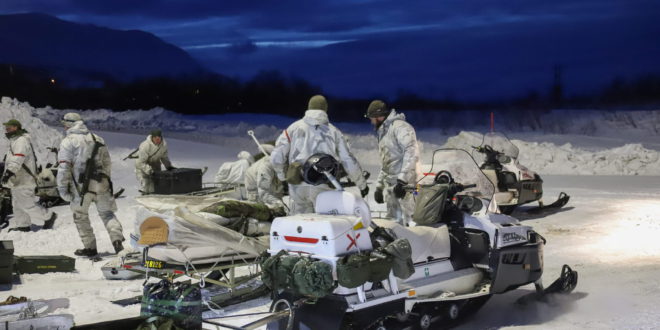 Nordic Arsenal: How Finland and Sweden Would Boost NATO Firepower

What military capabilities would Finland and Sweden bring to NATO if the two Nordic countries are accepted into the alliance?

Both bring know-how, particularly in terms of operating in cold, austere environments, and in the icy waters of the region.

The Swedish Armed Forces Subarctic Warfare Center trains its own armed forces as well as international partners in how to conduct land war in the high north. The training includes scenarios using snowmobiles and skis.

In terms of equipment, Sweden’s more traditional offerings include an armored vehicle with a suspension system that is based on Formula One racing technology. The high-tech suspension adjusts according to terrain, and moves fast atop uneven terrain. The vehicle, known as the CV 90 (Combat Vehicle 90), carries a canon that fires five 40mm rounds per second.

Sweden also has the super wide-tracked Bandvagn Skyddad 10, which can navigate slush, snow, or swamps that other vehicles would become bogged down in. The Swedish-British BvS 10 functions as a hybrid swimmer, and can paddle forward through watery areas. The armored vehicle has smoke or fragmentation grenades, and can carry a heavy machine gun.

Finland brings traditional firepower, including U.S.-made fighter aircraft such as the F/A-18C/D Hornet and ina few years, its replacement, the F-35A Lightning II.

Finland fields the Leopard 2A6 main battle tanks, with some variants being configured for Mine clearance, bridge-laying and anti-aircraft missions.

The country’s 120 KRH is a 120 mm towed heavy mortar designed to provide indirect fire, and to apply illumination and smoke on the battlefield.

Also in Finland’s arsenal are a ships that include Hämeenmaa-class minelayers. These boats can sail on the high seas and are ice strengthened, according to the Finnish Defense Forces. “They have been designed to operate both at open sea and in the archipelago in all conditions,” the group notes. “In addition to minelaying, these vessels are used to protect maritime traffic, carry out surveillance, and function as leading ships.”

The NATO allies frequently rehearse the scenarios of Arctic warfare.

Earlier this year, some 30,000 troops from 27 countries convened in northern Europe as part of Cold Response 2022, a training exercise in how to fight and survive in an Arctic environment.