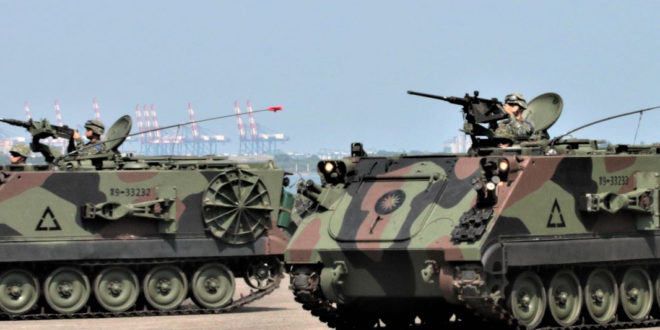 Pentagon Won’t Confirm Reports of US Special Forces in Taiwan

NOTE: “I think we have special operators and others there, and we have in the past, that are there training this military [and] working with them.” Congressman Ami Bera said despite DOD not giving information.

WSJ had reported that “A U.S. special-operations unit and a contingent of Marines have been secretly operating in Taiwan to train military forces there, U.S. officials said,”

10 months ago reports were that Special Operations forces were in Taiwan.

Pentagon Won’t Confirm Reports of US Special Forces in Taiwan

U.S. Defense Department officials are refusing to confirm reports that American forces are in Taiwan, secretly training Taiwanese troops to prepare them in case of an attack from China.

The Wall Street Journal on Thursday reported the Pentagon has about two dozen special operations troops working with select units of Taiwan’s armed forces, while a contingent of U.S. Marines has been training other forces on maritime tactics.

U.S. officials, speaking to the Journal on the condition of anonymity, said the American forces had been engaged in the training operations for at least the past year.

Pentagon officials Thursday declined to confirm the report, though a spokesperson said the U.S.-Taiwan relationship “remains aligned against the current threat posed by the People’s Republic of China.”

“The PRC (People’s Republic of China) has stepped up efforts to intimidate and pressure Taiwan and other allies and partners, including increasing military activities conducted in the vicinity of Taiwan, East China Sea and South China Sea which we believe are destabilizing and increase the risk of miscalculation,” Defense Department spokesperson John Supple told VOA in a statement.

“The United States has an abiding interest in the peace, security and stability of the Indo-Pacific — including in the Taiwan Strait,” he added. “We urge Beijing to honor its commitment to the peaceful resolution of cross-Strait differences, as delineated in the three communiques.”

Asked about the Journal report, Taiwan’s main representative office in the U.S. told VOA it had no comment.

Several U.S. lawmakers Thursday said they were also unable to confirm whether U.S. special forces were conducting training in Taiwan, though they expressed support for the reported mission.

‘China is being provocative’

“I’d be happier if that number was in the hundreds,” Tillis said. “China is being provocative, and if we take a step back in posture, every step that we take back I have no doubt China will take a step forward.”

“We all want to have Taiwan build up its own self-defense capabilities to send a message to China,” California Democratic Representative Ami Bera told the forum, calling on the U.S. to make its deterrence policy less ambiguous.

The concern has been heightened by repeated aerial incursions, with Beijing sending more than 150 military jets into Taiwanese airspace over several days.

“The US should send 240 servicemen publicly, in US military uniform, and make public where they are stationed,” Xijin added. “See whether the PLA [People’s Liberation Army] will launch a targeted airstrike to eliminate those US invaders!”

A separate post on the Global Times website quoted a fellow at the Chinese Academy of Social Sciences as saying that when it comes to Taiwan, Beijing can “effectively counter U.S. provocations in the region by undertaking massive military actions around the island.”

But there also appeared to be some efforts to defuse some of the tension.

At the same time, however, Price said Taiwan holds an important role in the Indo-Pacific region, and he invited U.S. allies to join in “expanding strong ties with Taiwan.”

Talking with reporters Thursday in Brussels, where he was meeting with NATO allies, Sullivan described the talks with Yang Jiechi as productive.

“It was a real opportunity, behind closed doors, to really lay out for one another our different perspectives and intentions,” Sullivan said.

The meeting, he added, was a way to “do our best to create a circumstance in which this competition [between the United States and China], which is an intense competition, can be managed responsibly and does not veer into conflict or confrontation.”