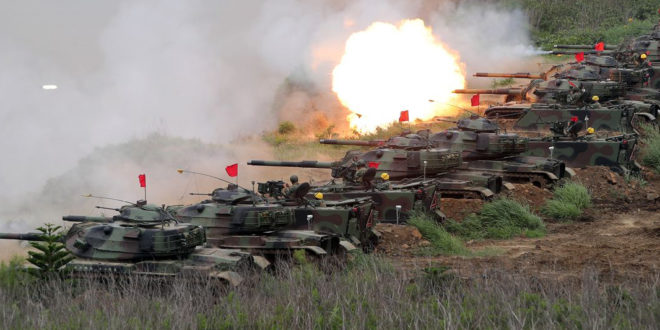 Consistent with the policy articulated in the Taiwan Relations Act, the U.S. continues to make available to Taiwan the defense materiel and services necessary to enable it to maintain sufficient self-defense capability, Rood said.

This year, DOD has approved more than $10 billion in defense sales — such as M1A2 Abrams tanks and F-16 Fighting Falcon fighters — to recapitalize its force.

“We are supporting their development of more mobile, survivable and asymmetric capabilities,” Rood said. “The ultimate goal is to develop a more combat credible force.”

What we can do to support Taiwan is faithful implementation of the Taiwan Relations Act.  So that has a number of things included in it that relate directly to the military threat Taiwan faces.  We do provide Taiwan with weapons of a defensive character for their sufficient self-defense.

We also maintain the capacity to resist force, should our national command authority ask us to do so.  So we look at our planning, we look at our own posture, our own capability.

And we do a number of things to assist Taiwan in the defense service area as well.  We don’t just sell them weapons that are required for their defense, we support training and we support the professionalization of the military, looking at reserve forces, et cetera.

So we’ll continue faithful implementation of the TRA as the best mechanism to deal with the — with the emerging China threat that they face.

Our law says that any threat to Taiwan — and — and it’s a broad definition of threat, to include economic threats, blockade, et cetera — would be regarded with grave concern in the United States.  And the president would consult with the Congress on an appropriate response.

I think our history is clear:  When Taiwan has been threatened, the U.S. has responded in an appropriate manner to help support Taiwan.  So I think in the future, if we were to — I think it could be well-expected that we would want to see Taiwan be able to preserve its — its status, free from coercion.

A top Defense Department official said the U.S. and its allies are facing a number of global threats — from Russia, North Korea, Iran, Syria and various terrorist groups.

John C. Rood, undersecretary of defense for policy, told the Senate Armed Services Committee that a growing concern, however, is the military, economic and political high-end threats to Indo-Pacific region allies and partners emanating from China.

In response to regional threats from China, the Defense Department is strengthening its military relationships with a number of countries, he said, citing examples in his oral and written testimony:

The department is integrating its National Defense Strategy with Japan’s analogous National Defense Program Guidelines and has an ongoing dialogues to reevaluate roles, missions and capabilities while increasing operational readiness and training, Rood said.

DOD is also increasing cooperation with the Japanese in space, cyberspace, the electromagnetic spectrum, and artificial intelligence as well as cross-domain operations, he added.

“We are committed to a common vision for the U.S.-India Major Defense Partnership, which we will advance … on Dec. 18,” Rood said.

Additionally, the department has agreed to expand military-to-military cooperation and improve interoperability, including by establishing a new tri-service amphibious exercise that will be called Tiger Triumph, he said.

“No country in Southeast Asia does more than Singapore to enable a U.S.-forward presence in the Indo-Pacific,” Rood said.

Also, Singapore forces have four active training units stationed in the United States. “We expect to agree soon on a permanent Singapore fighter training presence in Guam,” he said, adding that Singapore is a top purchaser of advanced U.S. weapons systems.

Consistent with the policy articulated in the Taiwan Relations Act, the U.S. continues to make available to Taiwan the defense materiel and services necessary to enable it to maintain sufficient self-defense capability, Rood said.

This year, DOD has approved more than $10 billion in defense sales — such as M1A2 Abrams tanks and F-16 Fighting Falcon fighters — to recapitalize its force.

“We are supporting their development of more mobile, survivable and asymmetric capabilities,” Rood said. “The ultimate goal is to develop a more combat credible force.”

“In Vietnam, we are building a productive defense relationship and overcoming the legacy of the Vietnam War,” he told lawmakers.

Last year, the U.S. Navy conducted the first aircraft carrier visit to Vietnam since the end of the war. The U.S. has also transferred a high-endurance Coast Guard cutter to Vietnam. In addition, Defense Secretary Dr. Mark T. Esper announced during his visit to Hanoi two weeks ago that the U.S. will provide a second such cutter to Vietnam.

Besides mentioning those nations, Rood said the department is engaging with island nations throughout the Pacific and is planning to invest $521 million over the next five years in programs like the Maritime Security Initiative to build the capacity of allies and partners in the region, including developing partners’ ability to conduct maritime security and maritime domain awareness operations and advancing interoperability with U.S. forces.

Previous Pentagon Won’t Confirm Reports of US Special Forces in Taiwan
Next RFE Exclusive: Afghan Pilots Tell Of Daring Escape From The Taliban, And Of Life In Limbo In Tajikistan