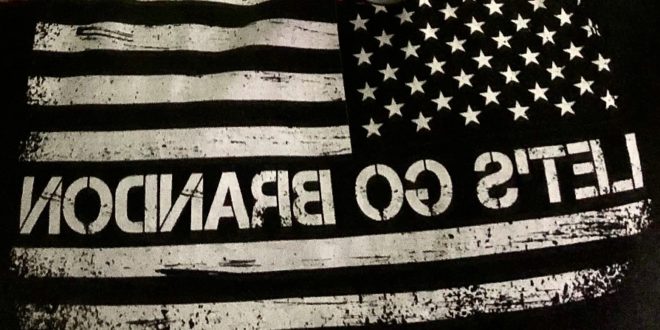 “Let’s go Brandon” has become a common phrase and rallying cry for those that do not like Joe Biden. The saying, the meme, and now a banner is becoming commonplace at many different public events, like the Georgia versus Missouri college football game.Posted by: Chris Elliot|November 8, 2021

Fans watching the football game on November 6th were greeted by a large banner, being flown over the crowd, with the now infamous saying.

Following the saying was an advertisement for a social media platform that says it was “founded on the principles of free speech, independent thought and rejecting political censorship and ‘cancel culture.’”

For those of you that have not kept up with the latest social trends, and therefore may not be aware of the saying, let us educate you for a moment. The saying was born at a NASCAR Xfinity race after driver Brandon Brown had won.

As a reporter, Kelli Stavast was interviewing Brown on his win, the crowd can be heard in the background chanting “F… Joe Biden.” For whatever reason, Stavast declared on the live interview that the crowd was actually chanting, ‘Let’s go, Brandon,’ in his honor, and like that, the social media phrase was born.

Since ‘Let’s go, Brandon,’ has become popular, the phrase is showing up at different venues throughout the nation. Even though the phrase has significant popularity, it is strange how the mainstream media has not done many reports on it.

David Hookstead, the sports and entertainment editor for Daily Caller, pointed out this glaring fact when he said:

“The media might want to ignore the massive movement taking over the sports world, but I won’t. You can’t sit through a college football Saturday without hearing a ‘F**k Joe Biden’ or ‘Let’s Go Brandon’ chant.”

Hookstead then tweeted about the issue:

“How many “F**k Joe Biden” chants are we going to hear today during college football games?

There are also reports of an airline pilot using the phrase over the intercom system in the plane or all of his passengers to hear. Apparently, there was at least one person on the flight that took offense and filed a complaint (shocker, an Associated Press reporter).

“The rapid rise in popularity of the phrase amounts to a sort of verbal secret handshake, a way for those deeply opposed to Joe Biden’s presidency to identify other members of their tribe….

This-like so many other politically themed mems and internet ephemera…will almost certainly fade as rapidly as it has become ubiquitous…But, for now, “Let’s go Brandon” is having its moment.”