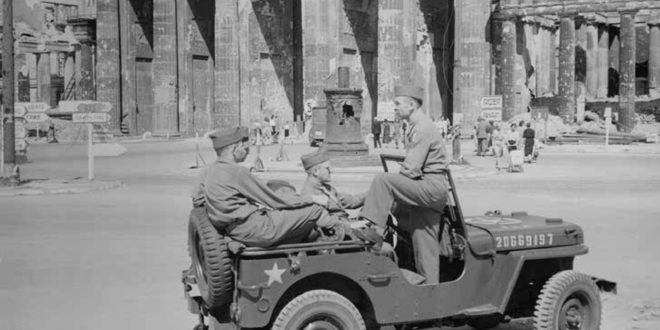 A group of GIs views the Brandenburg Gate.

The U.S. Army in the Occupation of Berlin, 1945–1949
by
William Stivers and. Donald A. Carter
Below are brief excerpts of the 350 page book

The Cold War conflict can be reduced to one particular issue and confrontation—Berlin. The four victorious Allies; the United States, the Soviet Union, Britain, and France—jointly occupied the conquered city by formal agreement. Yet, almost from the signing of the German surrender documents, the alliance began to splinter. Each nation began the occupation with its own unique goals and expectations, but the increasingly aggressive nature of Soviet policy toward its occupied territories, in Berlin and elsewhere, alarmed the Western Allies. As the conflict escalated, it was clear that the city of Berlin, the only point where all four members of the former alliance interacted on a daily basis, would be a breeding ground for Cold War animosities.

Founded on wartime rights of conquest, the U.S. military occupation of its sector of Berlin, began on 4 July 1945. Unlike the rest of Germany, the city remained under four-power military occupation until 3 October 1990, the day of Germany’s reunification. American soldiers continued as guests in the city until September 1994. By the time the last units had departed, the period of America’s military presence in Germany’s capital encompassed nearly fifty years.
Berlin in May 1945 was the capital city of a defeated and devastated Germany. After five years of Allied bombing and the bloody house-to-house fighting against the Russians in the climactic battle of the war, little was left standing. The civic, commercial, and cultural center of the Third Reich was almost completely destroyed, leaving a traumatized population to face the consequences of the war they had initiated.

Over the course of the next half century, the occupation passed through numerous phases. The first phase—the subject of this book—lasted little more than four years. Its defining feature was the administration of Germany and Berlin through the military governments of the United States, Great Britain, the Soviet Union, and France. This time was unique in the history of the U.S. Army due not only to the international circumstances surrounding its mission, but to the intimate involvement of military personnel in the domestic affairs of an advanced European state.
Few periods were more momentous than those four years, when the events of an epoch were compressed into a short historical interval. The subjection of Adolf Hitler’s shattered Third Reich by the Allied powers, the disintegration of the wartime coalition, the reconstruction of Western Europe with American aid, the Soviet blockade of Berlin, the signing of the North Atlantic Treaty, and the founding of two German states with Europe divided along their border, all occurred during the period of military rule in Germany and Berlin. As a result, at no time other than the war itself did American soldiers stand so squarely in the center of global affairs. In Berlin, where the powers came together in direct physical proximity, they lived on the “seam” of global politics. Every action taken, however localized, had pervasive effects, both objective and subjective, on Germany, Europe, and the United States.

Those first four years in Berlin were marked by rapid changes. When the victor nations entered a shattered Berlin in 1945, they envisioned a unified metropolis serving as the permanent seat of four-power rule over Germany as a whole and planned to govern the city’s internal life through a single, interal- lied “Kommandatura.” Despite a hopeful start—capped by the drafting of a new municipal constitution and the holding of citywide elections in October 1946—the vision failed. In the Kommandatura, differences over monetary reform escalated an already emerging breach between the Western Allies and the Soviet Union. German party conflicts, rooted in the divisions of the interwar republic, drew the occupiers into a political vortex, while failure to unify Germany’s economy put the entire country on the path to partition. Tensions climaxed in the spring of 1948 when the Soviets blockaded West Berlin’s land communications with the Western Zones of Germany, forcing the West to supply Berlin by air. By the autumn of 1948, Berlin, like Germany, had split in two, and the line dividing East and West Berlin had become, both physically and symbolically, the front line of East-West conflict. After the lifting of the blockade on 12 May 1949, the city remained divided, and with no modus vivendi to bridge the separation, the split deepened.

At 0300 the next day, 16 April, the Soviets launched Operation Berlin. They committed three army groups, comprising over 2.5 million men, 6,250 tanks and self-propelled guns, 41,600 guns and mortars, and 7,500 aircraft to an attack along the entire Oder-Neisse from Görlitz to Stettin. Commanded by Marshal Zhukov, the attackers on the central front crashed against powerful German defenses built up during the ten-week pause in the Red Army’s advance. Zhukov’s men needed four days to crack the German lines, and the first Soviet spearheads did not reach Berlin’s outer suburbs until the morning of 21 April. A ferocious combat ensued in a city landscape especially favorable to defenders: a maze of rivers and canals; nearly 500 bridges; a ready-made inner defense belt fashioned from the S-Bahn ring of parallel railway tracks, some running through deep cuttings; barricaded roads covered by antitank weapons, flak guns and machine gun posts, concealed inside buildings or behind walls of rubble; and finally, three enormous bomb and shell-proof flak towers, self-contained fortresses with their own power and water supplies and well-stocked with food and ammunition. Not until after twelve days of combat inside Berlin, on 2 May 1945, did the city’s garrison finally surrender.42

According to Russian military historian Grigory Kivosheyev, Operation Berlin cost the Soviets somewhat more than 81,000 dead—of whom some 20,000 to 25,000 died inside the city—plus 280,000 men wounded or sick during the action. These figures exceeded Bradley’s estimate of 100,000 total casualties for an American assault on Berlin and vindicated his caution. Those who find that estimate far too high assert that Bradley had failed to account for the crumbling of resistance along his entire front, which would have given U.S. forces a clear run to the prize. Diminished resistance in the Bavarian countryside, however, gave no measure of the situation in Berlin.43

On 8 May 1945, six days after the cessation of combat in Berlin, representa- tives of the German high command, led by the armed forces chief of staff, Field Marshal Wilhelm Keitel, signed the general act of surrender. The ceremony took place in the auditorium of the former German army engineer school in Karlshorst—the suburb of Berlin soon to become the site of the Soviet Military Administration for Germany and the symbol of Soviet rule in the Eastern Zone. Marshal Georgi Zhukov was present for the Soviet Union and Air Marshal Sir Arthur W. Tedder for the Western Allied powers. The commander of the U.S. Strategic Air Force, General Carl A. Spaatz, and the commander of the First French Army, General Jean de Lattre de Tassigny, served as witnesses. Keitel entered the room stiffly erect, bearing a mien of annoyed contempt for the proceedings. He briefly raised his field marshal’s baton in salute, laid the baton on the table, adjusted his monocle, and quickly scrawled his signature on the document. With that, World War II in Europe was over.1
Two months later, on 4 July 1945, another ceremony took place in Berlin. Assembling on the grounds of the former Prussian Military Cadet Academy, the onetime home of Hitler’s SS bodyguard regiment in the western district of Steglitz, one company of American armored troops lined up opposite one company of Soviet infantry. Having arrived just the day before, the Americans symbolized the larger force that would enter the U.S. Sector over the following days. Soviet Brig. Gen. Nicolai Baranov was the first to speak. He lavished praise on the “great American democracy,” extolled its role as “arsenal of the United Nations,” and lauded the “gallant American forces” who destroyed the enemy on the Western Front. He tempered his comments, however, by claiming that the Soviets had guaranteed that success when they “broke the back of the German Army” in 1943–1944 and “nailed down” its “chief forces” in the East. He then relinquished the sector to the United States.

U.S. troops initially earmarked for the occupation of Berlin numbered almost 25,000 men, exclusive of the Headquarters Command, Berlin District. The 2d Armored Division, under the command of Brig. Gen. John H. Collier, was to comprise the nucleus of this force. Planners on Parks’ staff, however, regarded that division as not well suited for the task due to the relatively small number of infantry in an armored division and the extensive amount of patrolling and guard duty that would be required. Accordingly, they requested that SHAEF substitute an infantry division for the 2d Armored. SHAEF countered with a proposal to substitute the 82d Airborne Division, which the Berlin District accepted. However, the 82d was then involved in a move and general reassembly, and it would not be ready for occupation duties before July. Consequently, it was necessary to use the 2d Armored Division for the initial entry into the city.29
By 29 June, some 26,000 soldiers had gathered in Halle to prepare for the move into Berlin. More than half of these were in combat units, consisting of the 2d Armored Division, the 702d Tank Destroyer Battalion, and the 195th Airborne Antiaircraft Battalion (Automatic Weapons). Service troops included a wide variety of engineer, medical, ordnance, quartermaster, transportation, and signal units, totaling 7,763 men. Miscellaneous units such as military police, microfilm teams, counterintelligence corps detachments, postal units, finance teams, military bands, and others provided another 1,314 troops.30

The U.S. Army Center of Military History (CMH) has released a new Cold War era book: “The City Becomes a Symbol: The U.S. Army in the Occupation of Berlin, 1945-1949.”

The latest addition in the U.S. Army Cold War series, this new book by William Stivers and Donald A. Carter begins in July 1945 during the opening days of the occupation of Berlin by the Allied powers. The four nations negotiated on all aspects of postwar life in the city, including troop placements, headquarters locations, food distribution and the question of which Berliners could serve in governing the city.

During the initial years of the occupation, differences emerged over policies and goals that led to the Soviets cutting off road and rail access to the city. With no other options, U.S. and British forces had to supply their sectors of the city by air. In addition to meeting the basic needs of the residents in their sectors, the Western allies worked to win the loyalties of the citizens and to convince political leaders to resist the spread of Soviet communism. These first four years of occupation set the stage for a decades-long face-off with the Soviets in Germany.

This book is 329 pages and contains six maps, forty illustrations and an index. It will be issued as CMH Pub 45-4 (cloth) and 45-4-1 (paper), and is available for purchase by the general public from the U.S. Government Publishing Office.

To order the book,