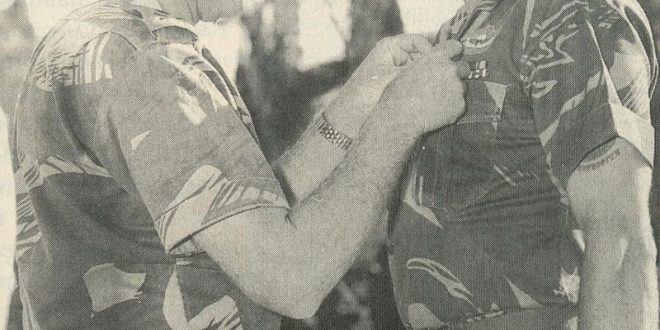 Squadron Commander Capt. Robert C. MacKenzie receives the Silver Cross of Rhodesia in 1979, "for conspicuous gallantry and leadership in action."

Rhodesia ‘The Country That Was’ : Zimbabwe ‘The Failed State That Is’

Rhodesia ‘The Country That Was’ :  Zimbabwe ‘The Tragedy That Is’

Many years ago a country existed on a continent that for the most part had never known stability or progress. A continent locked in perpetual tribal warfare. A country that was Christian in character, striving for democracy and one of the most advanced, modern nations on the continent.

Labeled as the breadbasket of the continent, rich in natural resources, striking in beauty, with an educated population, a strong economy, and a currency closely on par with the American dollar. A nation with a sunshine bright future.

That nation was Rhodesia! On the African continent.

The country had its beginnings as chartered to the British South Africa Company in 1890 and was ruled that way until 1923. Southern Rhodesia as it was called then was formed and attained self-government except in measures affecting natives and foreign policy. For the next 30 years’ industrialization and development of agriculture took place at a rate unseen on the African continent.

During World War II the nation sent more troops (per captia) to aid the British effort than any other territory under the British Crown. And had also aided the British Crown in many other conflicts. In 1953 until 1963 the country joined a loose federation of Northern Rhodesia, Nyasaland.

After the Federation broke up in 1963 and during decolonization of Africa, Britain insisted that Rhodesia would not receive full independence until a majority rule plan was in place. The problem was Rhodesians looked north and saw for themselves the horrible chaos plaguing the recently independent majority ruled nations and were terrified.

After two years of fruitless negotiations, changed British administrations and demands, on November 11th 1965 Rhodesia declared a Unilateral Declaration of Independence. To understand the magnitude of this action, until this time only one nation had ever broken away from the British Crown unilaterally; The United States.

Britain and the U.N. imposed sanctions which were somewhat obeyed, and somewhat not obeyed, by the world community. However, another effect was that Rhodesia developed an even stronger domestic manufacturing economic sector. In fact, the Rhodesian economy was booming.

As the sixties came to a close and the cold war at a fever pitch, a heavily supplied Soviet/Chinese backed Marxist insurrection began to pick up in the nation around 1972, by 1976 this was a full blown insurrection. With the Marxist groups ZAPU led by Joshua Nkomo supported by the Soviet bloc and ZANU led by Robert Mugabe supported by the Chinese.

At first the highly trained Rhodesian military easily dealt with the problems, mainly on the Zambian border areas.

As time passed the dynamics began to change in the bush war. Portugal gave up the colonies of Angola and Mozambique, both nations would become Marxist revoluntary governments. Overnight Rhodesia was faced with an 800-mile hostile border with Mozambique. These new alignments allowed Zambia, along with Botswana to become even more emboldened to assist the Marxist insurrection.

The Marxist insurgents mainly focused on hit and run attacks on isolated locations, as the bush war progressed, and with communist bloc and even some western nations support. The Marxist increased the intensity of their attacks, which included bombing the nations fuel reserve depot, and the downing of two civilian commercial aircraft.

Despite being constantly hampered by a shortage of manpower and equipment, the Rhodesian military scored many major hits. In August of 1976 in Operation Eland, the Rhodesians went into Mozambique with 84 special forces soldiers and inflicted thousands of casualties while wiping out a major insurgent base at Nyadzonya, Mozambique. Rhodesia suffered four wounded.

In November of 1977 during Operation Dingo, 200 Rhodesian troops stormed another major base used by the insurgents at Chimolo New Farm, Mozambique. The Rhodesian military suffered 2 killed, 10 wounded. The insurgents suffered 3,000+ killed and 5,000+ wounded. The base was completely destroyed, severely affecting insurgent morale and operations.

As the bush war continued to drag on, and with no end in sight, the nation’s population tired of war, supported Prime Minister Ian Smith’s Internal Settlement with moderate Anglican Bishop Abel Muzorewa, this action effectively ended minority rule and brought universal suffrage to the population.

Despite these concessions and democracy self-evident for the nation then and for the future, the Marxist insurgents and world community, refused to recognize the new government of Zimbabwe – Rhodesia and the war continued, as did negotiations.

Finally, an agreement was reached at Lancaster House in London, England. between the Zimbabwe – Rhodesian government and the insurgent factions. The country temporarily reverted to British control and elections were held. With the British and Commonwealth election officials turning a blind eye to wide scale voter intimidation by ZANU, Mugabe won the election and became Prime Minister of Zimbabwe in March of 1980.

At first the government of Mugabe abided by the terms of the Lancaster House agreements, however slowly, then more rapidly it became apparent to the entire Zimbabwean population that Mugabe was nothing more than a tyrant enriching himself and his cronies at the expense of his countrymen.

Under Mugabe’s Marxist rule, Zimbabwe had gone from a food exporter to food importer with much of the population starving. In the 1980’s the AIDS epidemic hit and the incompetent government was unfit to deal with the crisis. The white population was harassed, then terrorized into fleeing the country, and the Ndebele tribe suffered genocidal ethnic cleansing. As the years of corruption turned into decades, the Zimbabwean currency collapsed, and the currency was suspended. In 2015 a 100 trillion dollar Zimbabwean note was worth 40 U.S. cents.

Finally, Prime Minister Mugabe’s own henchmen had had enough of him, and he was forced out. Mugabe fled the country to Singapore where he died in 2017.

For a brief second after Mugabe was deposed it looked as if democracy might have a chance to take hold in Zimbabwe, thus beginning the long process of recovery. However, those hopes have been dashed by tyrants now governing Zimbabwe who are the same as Mugabe, only the names have changed.

Today Zimbabwe is a basket case, with a non-existent currency, hopelessly corrupt, the rule of law is absent. Zimbabwe survives only by receiving foreign aid. Agriculture, manufacturing, mining and tourism are now only a shell of what they used to be. And there is very little employment for the population. The coronavirus has now struck the beleaguered nation, and the country’s youth see their situation as hopeless and without a future, over half the youth are now abusing opiate laced cough syrup to escape their reality.

The psychotic despot Mugabe and the Marxist, promised the Zimbabwean people freedom, peace, prosperity instead Zimbabwean’s received brutal oppression, constant turmoil and crushing poverty. Hopefully Zimbabwe can serve as a point of reference to other nations or individuals that entertain thoughts of a Socialist or Marxist utopia.

Previous Navy and Port of Hueneme Help Relieve U.S. Supply-Chain Congestion
Next The Officer who held the hill at the Battle of Gettysburg, Army Maj. Gen. Joshua Chamberlain