SOF: Mad Mike Hoare, with a bunch of his mercs, dubbed the 50 ‘Frothblowers’ invaded the Seychelles in an attempt to take over the government in 1981. The mission was aborted. Needing to get the hell out of town,  the mercs hijacked an aircraft and flew back to South Africa where they were all arrested.

The men flew into their target with their AK-47s hidden in false-bottom baggage. A weapon was found on landing, all hell broke loose and ultimately Mike and the Frothblowers, as he nicknamed them, flew to South Africa in a Boeing 707 that came in to land at the wrong moment. Ultimately, Mike was jailed for ten years, but pardoned after 33 months.

SOF, becoming aware of the predicament of Mike and the Mercs, ran an ad in the SOF magazine, selling patches, that helped raise money for Mike Hoare’s legal defense. AT $5 a piece, SOFers purchased 3500 patches, raising over $15K, a lot of money back in the early 1981.

Lt Col ‘Mad Mike’ Hoare believed you get out of life by living dangerously. And yet about 35 family and friends gathered in Durban on 17 March, St Patrick’s Day, to honour Mike as he turned 100 years old. Among them were five of the Wild Geese who fought with him in 5 Commando in the Congo in the 1960s to crush a communist rebellion, rescue 2000 nuns and priests from barbarity, and defeat Che Guevara.  Asked his secrets for longevity, the Irishman always says, “Laughter is the best medicine. But more seriously, there is very little that two asprins cannot fix. And never go and see doctors because they will only find something wrong with you.”

Mike is the subject of an authoritative biography which was published last year, titled ‘Mad Mike’ Hoare: The Legend, written by his son, journalist Chris Hoare.

Mike was schooled in England and, during World War 2, was the ‘best bloody soldier in the British Army’. He was demobbed as major after seeing action at Kohima, India, qualified in London as a chartered accountant and emigrated to South Africa.

Going rogue, he started living dangerously to get more out of life, including trans-Africa motorbike trips, bluewater sailing, exploring remote areas, and leading safaris in the Kalahari Desert. Here Mike got to know the CIA agent who was to change his life … and Nelson Mandela’s. Later Mike was technical advisor to the film The Wild Geese, which starred Richard Burton playing the Mike Hoare character.

In 1981 Mike led 50 ‘Frothblowers’ in a bid to depose the socialist government of the Seychelles. Things went wrong and soon Mike was to spend three years in the slam for hijacking a Boeing 707 before being granted an amnesty. The funds referred to above helped in his legal defense.

Later, Mike Hoare wrote a feature for SOF  of how one soldier of fortune’s adventure with 5 Commando “Nightwatch” during the Katanga Crisis became a misadventure. We will rerun that feature shortly.

Now for an insight into Mad Mike as SOF speaks  with author CHRIS HOARE, son of ‘Mad Mike’ Hoare Before Mike’s Death

Chris Hoare is a journalist in South Africa and the eldest son of ‘Mad Mike’. With unique access to Mike and his story, it took him about 12 years, working between times, to research and write this authoritative and referenced biography.

How is ‘Mad Mike’ Hoare today? 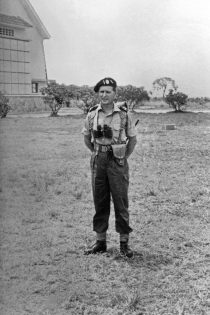 Chris Hoare
Author and Publisher of ‘Mad Mike’ Hoare: The Legend
“I found this book a cracking read and recommend it to those who want to miss a night’s sleep.”
– Frederick Forsyth, author of ‘The Dogs of War’, and ‘The Day of the Jackal’