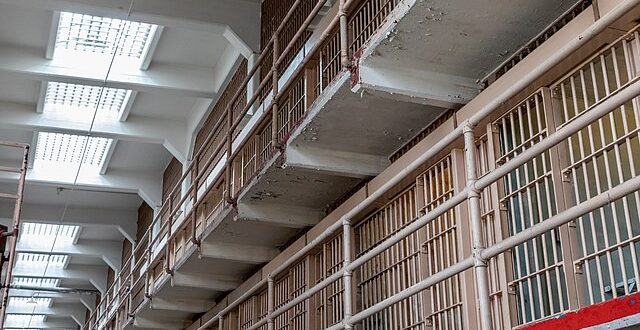 By Jolie McCullough, The Texas Tribune

Convicted murderer Gonzalo Lopez on May 12, 2022 was on a prison transport bus in Central Texas when he managed to escape his handcuffs, cut into the driver’s compartment, and stab the driver with a makeshift weapon. He stole the officer’s gun, wrestled him outside and hijacked the bus, driving about a mile before crashing and fleeing on foot.

Lopez evaded capture for weeks, until law enforcement responding to a welfare check at an area cabin on June 2 found Mark Collins and his four grandsons, ages 11 to 18, dead and the family’s truck missing. That night, deputies south of San Antonio spotted the truck and stopped Lopez with spike strips, ultimately killing him in a shootout.

The tragedy drew shock and fury from community members and state officials. Lieutenant Gov. Dan Patrick called for a Texas Rangers investigation, and the Collinses’ family plans to sue the Texas Department of Criminal Justice for its role in their loved ones’ deaths, an agency spokesperson confirmed.

In December, reports from TDCJ and an independent consulting group found that the escape, extended evasion and massacre of a family in Centerville were preceded by systemic failures among prison officers and their supervisors.

TDCJ found that a dozen officers, two sergeants, a captain, a lieutenant and a major at the Hughes Unit all failed to ensure Lopez was unarmed and properly restrained by haphazardly searching prisoners and their property and skipping safety checks (along with falsifying documents saying such checks and searches had been performed).

CGL, the consulting group, said staff at the prison “had become complacent, and circumvented security procedures in favor of hastily completing responsibilities in a cursory manner.” The group said the failures seemed routine. Although they did not investigate other facilities, the consultants said it was possible such failures were occurring throughout the state’s 100 prisons.

After the escape, prison spokesperson Amanda Hernandez said Friday, three employees resigned, and 15 others were disciplined. Some were fired, she said; others received probation or suspension.

But the seemingly routine bypassing of crucial security measures at the Hughes Unit was not a failure of only the employees, according to CGL. Short-staffing has long plagued the agency and been exacerbated in recent years.

Over two years, CGL stated, Texas prison officer vacancies grew from about 4,300 to more than 7,600 in April, the month before Lopez’s escape, with Texas’ prisons only about 68% staffed. The Hughes Unit in Gatesville, where Lopez lived, was 57% staffed.

“These staff shortages required the remaining staff to carry a heavier workload and increased the amount of overtime they were assigned,” CGL wrote. “This contributed to establishing a weakened security environment that better facilitated inmate Lopez’s escape.”

TDCJ has long struggled against dangerous, chronic understaffing, but the number of officers reached critical lows during the pandemic. Since last summer, about 300 prison officers have also been working at two units now being used as state-run jails for Gov. Greg Abbott’s Operation Lone Star, which largely hold migrants accused only of trespassing on private property. Short-staffing has been blamed for increased assaults on officers and prisoners, as well as malnourishment and even harsher living and working conditions.

TDCJ has recognized its staffing crisis, pushing to increase recruitment and retention by offering sign-on bonuses and, this April, bumping salaries by 15%, similar to actions taken to address the staffing crisis within the state’s juvenile prisons. The number of officers has grown slightly since the raise, according to TDCJ records, with prisons staffed at 71% in October, compared with April’s 68%.

But understaffing is still dire, especially at some large prisons. In October, 20 prisons were less than 50% staffed, according to prison data. And the Hughes Unit has fewer officers than in April, dropping from 57% staffed before the escape to 50%, with 275 open officer positions in a prison for nearly 3,000 men.

But in addressing understaffing’s burden on the department, Hernandez said Friday that “while short-staffing was a significant contributor, it was not the sole cause.”

Lopez, 46, was serving two life sentences for the death of José Guadalupe Ramirez, whom Lopez said he killed on an order from a Mexican drug cartel, and an attempted murder during a car chase. He’d been in prison since 2006 and had been confirmed as an ex-member of the Mexican Mafia, according to the prison review.

At the time of the escape, Lopez was on a bus with 15 other prisoners and two veteran prison officers, traveling from the Hughes Unit to the Estelle Unit in Huntsville for a medical appointment. He was kept in a section of the bus for high-security inmates, separated by metal caging from the armed driver, while the second officer with a shotgun sat at the rear of the bus behind the less-restricted prisoners.

A third seat up front meant for a third officer was empty because of short-staffing.

Not properly searched before the ride, Lopez climbed aboard with two makeshift metal weapons and what resembled a handcuff key in his mouth, other prisoners told investigators. Lopez quickly freed himself from his improperly placed restraints and spent about an hour and a half cutting his way through the metal caging to the driver’s compartment.

He slid into the driving compartment, grabbed the officer’s gun and stabbed him, the review said. The officer managed to stop the bus, and in a scuffle, stumbled outside the bus with Lopez fighting over the gun, he told investigators. The second officer, saying he thought the bus had crashed, jumped out the back and realized there was an escape attempt.

With the officer’s gun, Lopez jumped back into the bus and drove off. With the second officer’s shotgun, the driver shot out a tire, causing Lopez to crash about a mile down the road.

Shortly after, the police chief for the nearby town of Jewett approached the now-abandoned officers and, hearing about the escape, took off toward the scene. According to an investigation by The Marshall Project and the Houston Chronicle, the chief did not give chase or shoot after Lopez when he arrived to find the prisoner fleeing from the bus across a field into the brush.

Quickly after the escape, law enforcement swarmed the area on foot, with dogs and on horseback to search for the escaped murderer. But for weeks, they failed. TDCJ’s review noted its staff misused their search dogs, bringing out multiple units’ dogs and confusing the scents they were tracking.

Law enforcement was at a loss until authorities got a call on May 31 about a burglary nearby and took DNA swabs to check against Lopez. Nobody told locals of the development, however, according to the investigation by the news organizations. Two days later, minutes after learning the DNA matched Lopez, the sheriff’s office got a call from someone worried about the Collinses.

At their rural cabin in Leon County, officers found the bodies of Collins, 66, and his four grandsons: Waylon, 18; Carson, 16; and Bryson and Hudson, both 11. They died of gunshot and stab wounds.

In a statement paired with the release of its investigative findings, TDCJ said it has since reduced transportation of prisoners, relying more on telemedicine for medical appointments. The agency also increased the required number of officers in transport buses from two to three and will arm them with pepper spray as well as guns.

Supervisors will also be required to verify that proper searches have been completed before transportation, though similar verifications were said to be falsified prior to Lopez’s escape.

The department also upgraded its restraints in hopes of preventing future escapes, since Lopez was easily able to free himself. TDCJ is also having staff undergo new training focused on search procedures, weapons and prisoner transportation.

CGL warned TDCJ, however, of implementing corrective actions aimed at stopping Lopez’s escape that could further exhaust their limited staff.

“Developing corrective actions to the escape that load more work on already overtaxed staff can result in further failures,” the company wrote. “Given the low staff levels correctional officers are often require to perform the policy requirements of multiple positions.”

“TDCJ must ask ‘Are these policy requirements impossible to achieve given the current staffing crisis,’” the group added. “In certain circumstances we found this to be the case, and it likely contributes to staff taking security shortcuts.”

In response, Hernandez said the agency was reviewing its policies and procedures and auditing job responsibilities to reallocate non-security work to other staff.

This story was first published by The Texas Tribune, a nonprofit, nonpartisan media organization that informs Texans about public policy, politics, government and statewide issues.

Previous Soviet Soldiers Boiled Their Ammunition While Serving in Afghanistan: Here’s Why
Next The Rifles of SHOT Show 2023