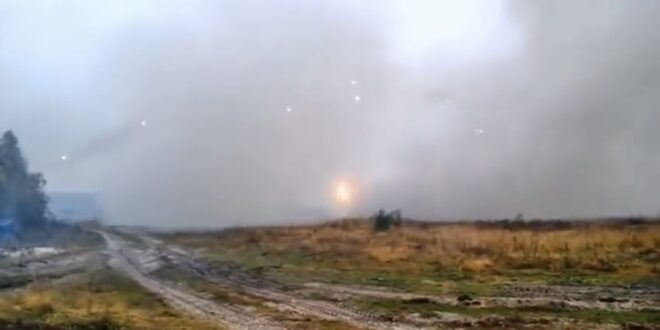 Ukraine Unleashes Artillery Barrage – And Records It On Video

UKRAINE – Artillery troops in Ukraine opened fire for a sustained barrage against Russian forces – and caught it on video. The Ukrainian Ministry of Defence showed an example on Twitter, with battlefield video of rockets being fired at Russian positions.

Troops here have been very informative, showing me their weapons and how they work. But words cannot explain as well as video what happens when Ukrainian soldiers unleash their artillery.

The Ukrainian Ministry of Defence showed an example on Twitter, with a battlefield recording of rockets being fired at Russian positions.

The Ministry wrote on Twitter: “For every meter of our land – fire!”

In the recording, Ukrainian Multiple Launch Rocket Systems (MLRS) can be seen launching a rapid-fire burst in a matter of seconds.