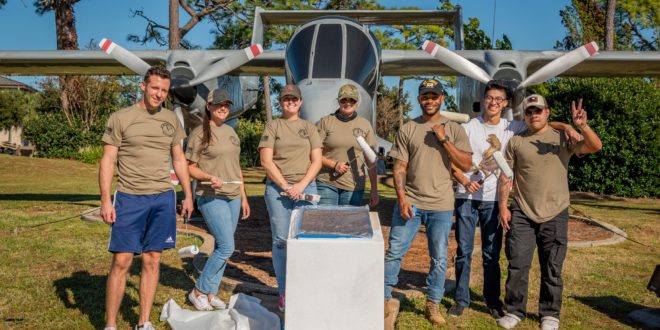 “We are not makers of history, we are made by history,” – Martin Luther King Jr.

Members of the 1st Special Operations Contracting Squadron recently took part in a restoration project for the Memorial Air Park at Hurlburt Field. The team worked to restore the park by washing, sanding and painting memorials!

SPECIAL OPERATIONS USE
At the height of the Vietnam Conflict, the AC-47 Gunship demonstrated the gunship’s awesome combat power defending bases. Since the AC-47 lacked sufficient air loiter time, the USAF searched for a supplemental gunship. Because the USAF was unable to detail further C-130s for gunship duties, the USAF settled on the C-119 in 1968. That year, the USAF reassigned 52 C- 119s from Pennsylvania and Indiana Air Force Reserve units. The USAF left 26 aircraft in the G- model configuration, which the Air Force referred to as “the Shadow.” They equipped the Shadows with four mini-guns. The 26 remaining aircraft were converted to K-models with the J85 Westinghouse underwing jet engine, four mini-guns, and two 20mm Gatlin guns. K-models carried the sobriquet “the Stinger.” From 1969 to 1972, the Stingers hunted enemy trucks, while the Shadows performed base defense missions.