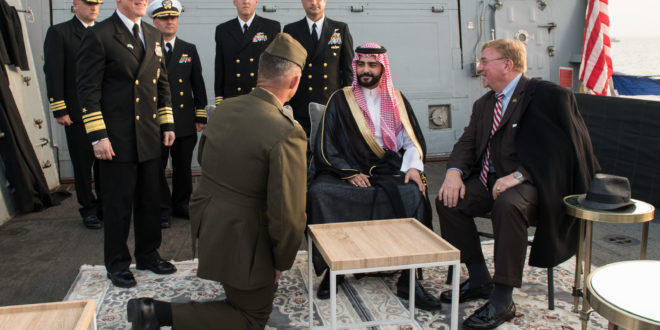 And thus the Saudi Oily Grip on the United States Begins

Ibn Saud greets President Franklin D. Roosevelt on USS Quincy in the Suez Canal, Egypt. The destroyer USS Murphy carrying King Ibn Saud of Saudi Arabia and party approaches the presidential Cruiser USS Quincy. US sailors on the deck of USS Quincy as well as on USS Murphy. The sailors salute. A motorboat in the background. The deck of the destroyer. Several scenes of crews securing lines between the two ships. Arab party members and sailors on the deck. King Saud seated on a chair surrounded by other Arabs and Colonel Eddy (USMC) who serves as an interpreter. Walking very slowly, with help of a cane, King Ibn Saud goes aboard the presidential ship and greets President Franklin D. Roosevelt who is seated on a chair. Saud speaks to President Roosevelt with the help of , Colonel Eddy, the interpreter. Location: Suez Canal Egypt. Date: February 1945. Critical Past Original. Idea:

The President asked His Majesty for his advice regarding the problem of Jewish refugees driven from their homes in Europe.6 His Majesty replied that in his opinion the Jews should return to live in the lands from which they were driven. The Jews whose homes were completely destroyed and who have no chance of livelihood in their homelands should be given living space in the Axis countries which oppressed them. The President remarked that Poland might be considered a case in point. The Germans appear to have killed three million Polish Jews, by which count there should be space in Poland for the resettlement of many homeless Jews.

The President replied that he wished to assure His Majesty that he would do nothing to assist the Jews against the Arabs and would make no move hostile to the Arab people. He reminded His Majesty [Page 3]that it is impossible to prevent speeches and resolutions in Congress or in the press which may be made on any subject. His reassurance concerned his own future policy as Chief Executive of the United States Government.

His Majesty thanked the President for his statement and mentioned the proposal to send an Arab mission to America and England to expound the case of the Arabs and Palestine. The President stated that he thought this was a very good idea because he thought many people in America and England are misinformed. His Majesty said that such a mission to inform the people was useful, but more important to him was what the President had just told him concerning his own policy toward the Arab people.

The President spoke of his great interest in farming, stating that he himself was a farmer. He emphasized the need for developing water resources, to increase the land under cultivation as well as to turn the wheels which do the country’s work. He expressed special interest in irrigation, tree planting and water power which he hoped would be developed after the war in many countries, including the Arab lands. Stating that he liked Arabs, he reminded His Majesty that to increase land under cultivation would decrease the desert and provide living for a larger population of Arabs. His Majesty thanked the President for promoting agriculture so vigorously, but said that he himself could not engage with any enthusiasm in the development of his country’s agriculture and public works if this prosperity would be inherited by the Jews.