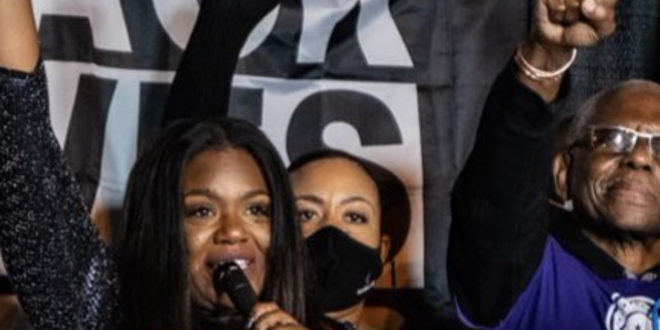 Congresswoman Cori Bush empty vehicle shot up? She was not injured?

I’m touched by everyone who has reached out. Thankfully no one was harmed. But any act of gun violence shakes your soul. That’s why our movement is working to invest in our communities, eradicate the root causes of gun violence, and keep everyone safe.” Cori Bush”

Jack Posobiec @. Member Rep. Cori Bush’s vehicle hit by gunfire in St. Louis area St. Louis consistently has been ranked among the most dangerous cities in the United States.

This is the America that Black people know

My skin burned for 22 hours after I was pepper-sprayed. The memory of that burn stung with a new kind of pain on Wednesday as I, now a newly sworn-in member of Congress, watched in horror and disbelief as an insurrectionist mob overran the Capitol.

Back in July, we had been protesting at the police station in Florissant, Mo., where a police officer had recently run over a Black man with his car. The police had been beating protesters for weeks. They tear-gassed us to the point of suffocation for painting “Black Lives Matter” on a road, arrested us for putting our fists in the air and beat those who they’d taken into custody.

That night was no different from any other night. The officers rushed out of the station in riot gear, slapping their batons against their shields, holding shotguns loaded with rubber bullets and chanting commands. They chased us into the middle of the street, forcing us to backpedal blindly in the dark. The police were pushing with such force that people began falling to the ground all around me, finding themselves swarmed by officers who began hitting them with batons. I reached in to try to pull a woman away to safety.

They sprayed us with mace. It wasn’t your average mace, either. I used every trick in the book to try to make the pain stop — milk, water, dish detergent. But my skin did not stop burning for 22 hours.

On Wednesday, as I sat in the House gallery listening to my colleagues debate the certification of the electoral college votes, something prompted me to get up and leave. I left the chamber and quickly went to check on what was happening outside. The doors were locked, but as I stood on the second floor of the Capitol and looked out through windows in the doors, I could see Trump flags and Confederate flags gradually moving closer. I froze in disbelief. The next minute, my staffer was rushing me back to my office.

Once I was in my office and we secured the door, I felt a different kind of burn — this time inside. Watching on TV, we saw white supremacists stroll past Capitol Police, untouched and unscathed. Just minutes after we had locked our door, the mob entered the House Rotunda. The rioters broke windows, sat in the House speaker’s office and invaded the Senate floor.

There was no way to avoid the comparison or to duck the obvious answer: Would this have happened if the rioters were there to fight for Black lives rather than white supremacy? We’ve been tear-gassed for much less, beaten for much less and shot at for much less. We’ve been assaulted by law enforcement for much less.

But it’s clear to me that top law enforcement leaders on Capitol Hill had little interest in preventing this attempted insurrection. Videos have emerged of police taking selfies with protesters, walking them down the stairs and even opening gates for them. The front line of officers were not in riot gear, they were not wearing gas masks, they were not holding guns loaded with rubber bullets. And, above all else, there were no police dogs.

We faced police dogs when we fought for justice for Mike Brown in Ferguson in 2014. There were police dogs at protests for Black lives this year, from the East Coast to the West. The president himself tweeted in May that the “most vicious dogs” awaited protesters standing up for Black lives at the White House.

But there were no police dogs awaiting the white supremacists who gathered outside the Capitol. It was no coincidence that this tool of racial control was absent Wednesday, as rioters carried the flag of the slave-catcher’s Confederacy — and its modern manifestation, the Trump flag — through the House Rotunda.

Many have said that what transpired on Wednesday was not America. They are wrong. This is the America that Black people know. To declare that this is not America is to deny the reality that Republican members of the U.S. House and Senate incited this coup by treasonously working to overturn the results of the presidential election. It’s to deny the fact that one of my senators, Josh Hawley, went out of his way to salute the white supremacists before their attempted coup. It’s to deny that he appropriated the sign of Black power, the raised fist, into a white-supremacist salute — a fist he has never raised at a march for Black lives because he has never shown up to one. It’s to deny that what my Republican colleagues call “fraud” actually refers to the valid votes of Black, brown and Indigenous voters across this country who, in the midst of a pandemic that disproportionately kills us, overcame voter suppression in all of its forms to deliver an election victory for Joe Biden and Kamala D. Harris.

This is America, and it will continue to be America, until white supremacy is dismantled. Justice starts at removing each and every representative who incited this insurrection. I’ve unveiled my first piece of legislationthat would do just that. We cannot denounce white supremacy and allow its endorsers to continue serving in our government.

WASHINGTON, D.C. – Today, ahead of Thursday’s 50th Anniversary of President Richard Nixon’s declaration of the “war on drugs,” Representatives Cori Bush (MO-01) and Bonnie Watson Coleman (NJ-12) introduced the Drug Policy Reform Act (DPRA), a bill to end criminal penalties for drug possession at the federal level and to shift regulatory authority from the Justice Department to the Department of Health and Human Services. The bill would also expunge existing records and provide for resentencing, reinvest in alternative health-centered approaches, and eliminate many of the life-long consequences associated with drug arrests and convictions: the denial of employment, public benefits, immigration status, drivers’ licenses and voting rights.

Last week, the Drug Policy Alliance – in partnership with the ACLU – released a nationalpoll that found 66% of American voters were in support of removing criminal penalties for drugs and replacing them with health-centered approaches.

“Growing up in St. Louis, I saw the crack-cocaine epidemic rob my community of so many lives,” said Congresswoman Cori Bush. “I lived through a malicious marijuana war that saw Black people arrested for possession at three times the rate of their white counterparts, even though usage rates are similar. As a nurse, I’ve watched Black families criminalized for heroin use while white families are treated for opioid use. And now, as a Congresswoman, I am seeing the pattern repeat itself with fentanyl, as the DEA presses for an expanded classification that would criminalize possession and use. This punitive approach creates more pain, increases substance use, and leaves millions of people to live in shame and isolation with limited support and healing. I’m proud to partner with Congresswoman Watson Coleman on legislation to end criminal penalties for drug possession at the federal level and repair harm in Black and brown communities. It’s time to put wellness and compassion ahead of trauma and punishment.”

“The United States has not simply failed in how we carried out the War on Drugs – the War on Drugs stands as a stain on our national conscience since its very inception,” said Watson Coleman. “Begun in 1972 as a cynical political tactic of the Nixon Administration, the War on Drugs has destroyed the lives of countless Americans and their families. As we work to address the opioid epidemic, it is essential that we change tactics in how we address drug use away from the failed punitive approach to a health-based and evidence-based approach.”

“Every 23 seconds, a person’s life is ruined for simply possessing drugs. Drug possession remains the most arrested offense in the United States despite the well-known fact that drug criminalization does nothing to help communities, it ruins them. It tears families apart, and causes trauma that can be felt for generations. The drug war has caused mass devastation to Black, Latinx, Indigenous and low-income communities and today we say, ‘Enough is enough!’” said Queen Adesuyi, Policy Manager for the Office of National Affairs at the Drug Policy Alliance. “We will not be subjugated any longer by an offensive that was created solely with the purpose of ‘disrupting’ our communities. This bill gives us a way out – a chance to reimagine what the next 50 years can be. It allows us to offer people support instead of punishment. And it gives people who have been harmed by these draconian laws a chance to move forward and embrace some semblance of the life they have long been denied.”

Last week, The American Civil Liberties Union (ACLU) and Drug Policy Alliance (DPA) released apoll showing that the vast majority of American voters believe the War on Drugs has failed (83%). The poll also found that 66% of American voters were in support of removing criminal penalties for drugs and replacing them with health-centered approaches

In addition to eliminating criminal penalties for drug possession at the federal level, the bill also incentivizes state and local governments to adopt decriminalization policies by otherwise limiting their eligibility to receive funds in the Byrne and COPS grant programs.