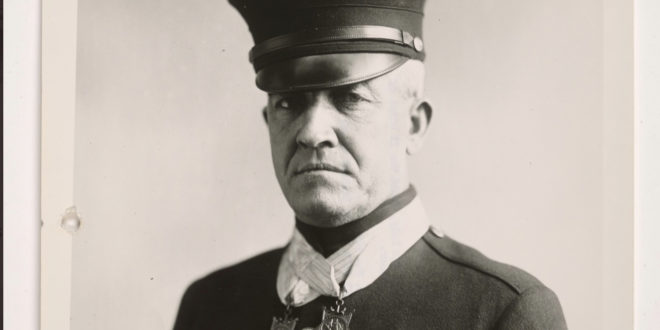 1915, GySgt Dan Daly received his second Medal of Honor for his heroic actions in Haiti when he and his men were ambushed by a force of 400 guerillas. He is one of two Marines to receive two Medals of Honor.

Sergeant Major Daniel “Dan” Joseph Daly was once acclaimed by MajGen John A. Lejeune, former Commandant of the Marine Corps, as “the outstanding Marine of all time.” MajGen Smedley D. Butler called him “The fightinest Marine I ever knew,” and wrote that “it was an object lesson to have served with him.”

This kind of praise was generally expressed by Marine officers and enlisted men alike and, according to the record, Dan Daly deserved it.

Sergeant Major Daly and MajGen Butler are the only Marines who have ever received the Nation’s highest military award-the Medal of Honor-twice for separate acts of heroism.

A small man (five feet, six inches in height and weighing only 132 pounds), SgtMaj Daly nevertheless was a fine military figure, erect and well-proportioned. His keen gray eyes looked upon danger without fear. Although a “natural” for publicity, he disdained it and disliked all the fuss made over him. He termed medals “a lot of foolishness.” Personally he enjoyed a pipe, crammed with cut plug tobacco, but did not drink.

He was a strict disciplinarian, yet fair-minded and very popular among both officers and enlisted men. He was noted not only for his reckless daring, but also for his constant attention to the needs of his men. Offered a commission on several occasions, he is said to have declined on the grounds that he would rather be “an outstanding sergeant than just another officer.”

Sergeant Major Daly is perhaps best remembered for a famous battle cry delivered during the desperate fighting in Belleau Wood in June 1918. Marines took a terrific pounding on the outskirts of Lucy le Bocage (“Lucy Birdcage” to the American Expeditionary Forces) at the fringe of Belleau Wood. They were outnumbered, outgunned, and pinned down. 1stSgt Daly ordered an attack. Leaping forward, he yelled to his tired men, “Come on, you sons of bitches, do you want to live forever?”

Very little is known about his early life other than the fact of his birth in Glen Cove, Long Island, New York, on 11 November 1873, and the fact that he was a newsboy and something of a fighter for his weight and size.

With the hope of getting into the Spanish-American War, he enlisted in the Marine Corps on 10 January 1899. But he didn’t make it. Before he had finished boot-camp training, the war had collapsed and he was ordered aboard ship and sent to the Asiatic Fleet.

In May 1900, he deployed aboard the USS Newark for Taku Bay, China, where he landed with other Marines enroute for Peking. The U.S. Marines and German forces had been stationed on Tartar Wall, south of the American Legation, but intense enemy fire had driven them from the position. With Capt Newt Hall, Pvt Daly mounted the wall bastion, bayoneted rifle in hand. On 14 August, Capt Hall left to bring up reinforcements and Pvt Daly remained to defend the position single-handed. Chinese snipers fired at him and stormed the bastion, but he fought them off until reinforcements arrived. For this gallantry he was awarded his first Medal of Honor.

His service was varied and included sea duty aboard the USS Newark, Panther, Cleveland, Marietta, Mississippi, Ohio, and Machias. In addition to combat in China, Haiti and France, he served in Panama, Cuba, Mexico and Puerto Rico, and on eight United States posts.

During World War I, he served from 4 November 1917 to 21 April 1919, participating in combat in the Toulon Sector (March-May 1918); Aisne Operations (June 1918); and the Chateau-Thierry Sector (Belleau Wood, June 1918). During this operation, on 5 June and at the risk of his life, he extinguished a fire in the ammunition dump at Lucy le Bocage. Two days later, while the same sector was under one of its heaviest bombardments, he visited all machine gun crews of his company, then posted over a wide section of the front, cheering his men. On 10 June, he single-handedly attacked an enemy machine gun emplacement, capturing it by the use of hand grenades and an automatic pistol. On the same date, during an enemy attack on the village of Bouresches, he brought in wounded under heavy fire.

He also served in the St. Mihiel Offensive (September 1918) and the Champagne Offensive (Blanc Mont, September-October 1918). He was wounded in action on 21 June and twice on 8 October 1918. He then served with the American Army of Occupation in Germany following the Armistice, which he considered “not a bad birthday present.”

Sergeant Major Daly remained unmarried all his life. In 1919 he was reported as saying, “I can’t see how a single man could spend his time to better advantage than in the Marines.” Soon thereafter he was placed on the retainer list of the Fleet Marine Corps Reserve, awaiting retirement. He took a job as a bank guard on Wall Street, New York City, and held the position 17 years.