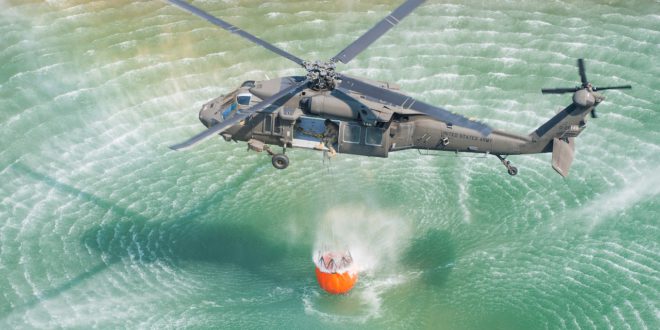 ‘It Was Just Wild’: Guardsmen Fight Fires From the Sky

‘It Was Just Wild’: Guardsmen Fight Fires From the Sky

‘It Was Just Wild’: Guardsmen Fight Fires From the Sky | BY KATIE LANGE, DOD NEWS

As wildfire threats continue to get worse, the need for people to help fight them grows. In recent years, state governments have asked the National Guard to assist with wildfires when primary responders’ resources are stretched thin. As always, the National Guard is more than ready to step up to the plate.

So far this year, the National Interagency Fire Center has reported 47,525 wildfires that have burned more than 6.49 million acres across 13 states. National Guard soldiers and aircrews from at least eight states have been called to help.

Pearl, 34, had to earn his Firefighter Type 2 Red Card in order to be mission-ready. That meant learning to pick up water in a bucket, suspended from an aircraft, from several sources, such as rivers, lakes, small reservoirs and streams.

“We also practice different drop techniques — if we’re going to do a water drop uphill or downhill,” Pearl said. “Some guys on the ground, they like spot drops, meaning they’d come to a high hover and drop straight down so it’s not fanning ahead.”

The Guard’s aerial firefighting crews consist of two pilots and two crew chiefs. Once a crew is selected for a mission, they get their chopper ready and wait in that operational area for a tasking from firefighters on the ground.

“The night prior, [the fire crews] do infrared mapping of the fire to see how it’s changed. Then the next morning, they republish a bunch of paperwork on what the fire looks like,” Pearl said. “They would give us a general grid of where it was and the predicted weather.”

Pearl and Barber said the goal of fighting wildfires is less about dousing the flames and more about prevention — dropping water ahead of the fire to stop more flames from catching.

“The amount of water that we carry — we’re not going to put out a flame. It’s burning too hot,” Pearl said.

“Our main job is basically cooling down what they call the ‘green side’ of the fires — stuff that hasn’t burned — so when the fire gets there, it’s less likely to rush through that area as fast,” Barber explained.

Barber, 32, helped fight fires in California’s wine country in 2020. During his first mission, he said all he could see was smoke; however, intense flames were burning just below the dense forest canopy.

“[Ground firefighters] would call out where to put the water, and it wouldn’t really correlate with your brain of where the smoke was,” he explained. “It makes for a bit of a learning curve.”

Barber’s experience in his home state of Idaho this summer was different because the forest canopy in the state’s northwest isn’t as dense.

“You could actually see the fire, and it was a little easier to put water on,” he said of the Snake River, Cougar Rock and Character complex fires he battled.

Pearl, who just began fighting fires this year, helped work the Cougar Rock Complex and Pioneer fires. It was like nothing he’d experienced before.

“It was kind of jaw dropping — the mass destruction and just how much those fires really affect that entire valley,” he said. “You would have trees that would go up in flames as we were coming in to drop water. It was just wild.”

Crew chiefs like Barber are responsible for helicopter maintenance, but they also fly during missions and fire weapons, manage cargo and help direct the pilots. In the case of fires, Barber is in charge of the “Bambi bucket,” which collects and drops the water. The rubber-like bucket inflates like a dish without a lid when it’s full, and it collapses flat when it’s empty.

“Once you fill it up with water and get ready to drop it on fire, the way it works is there’s a control box in the back of the helicopter. It’s directly connected to a valve at the bottom of the bucket,” Barber explained. “So, when the pilot is telling me to release the water, I squeeze the trigger, the valve opens, the water dumps out, and then we go and get more.”

“[Crew chiefs] are a huge support when we’re going to pick up water because, at that point, we can’t see the water anymore,” Pearl said, referring to the height at which they hover to make the collection happen. “[The crew chief] is telling me to slide left, slide right, move back, come down. I’m just manipulating the controls of what he says to put the bucket in a safe spot.”

Barber said the process can take some getting used to, but it’s less hectic than a search and rescue mission.

“Obviously, with a medevac situation and an injured person, there’s a higher anxiety or level of urgency versus a fire,” Barber explained.

“But it’s the same high hover work for us,” Pearl said. “We’re used to those visual references of holding an 80-foot to 90-foot hover while getting minimal drift with the helicopter so the bucket’s not slamming into the bank.”

At the end of the day, these Guardsmen are doing the work for the communities they swore to protect.

“I have a lot of friends who lived about 10 miles to the south of where one of the fires was … that’s all their backyard, their livelihood. So, you really want to protect that,” Pearl said. “It was by far the best thing I’ve ever done in the military.”

The DOD recently released a Climate Adaptation Plan to equip the services for extreme weather by integrating climate effects into exercises, training and contingency planning. Both men said their units have already been making proactive adjustments.

“Usually in the springtime, we’ll go and do our annual firefighter training with our buckets, so that way we’re ready sooner than later for if and when we get the call to go help,” Barber said. “Also, they try to schedule gunnery or shooting events when it’s not as dry out … when there’s more moisture in the air, so we’re less likely to start fires that way.”

“I feel like we’re going to start seeing a change in Idaho for us to really put our resources into helping our state,” Pearl said.

Previous How a U.S. Forest Service Special Agent busted a serial Arsonist, former Professor of Criminal Justice
Next A Sentinel of the 3rd Guard Lays Flag On the Tomb of the Unknown Despite Torrential Rains