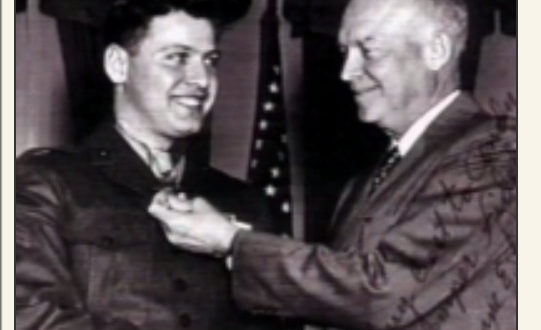 Duane Dewey being presented with the Congressional Medal of Honor by Pres. Eisenhower [3/12/1953]

Marine DUANE EDGAR DEWEY smothered a deadly missile with his body, saving his comrades in the Korean War

For conspicuous gallantry and intrepidity at the risk of his life above and beyond the call of duty while serving as a gunner in a machine-gun platoon of Company E, in action against enemy aggressor forces. When an enemy grenade landed close to his position while he and his assistant gunner were receiving medical attention for their wounds during a fierce night attack by numerically superior hostile forces, Cpl. Dewey, although suffering intense pain, immediately pulled the corpsman to the ground and, shouting a warning to the other marines around him, bravely smothered the deadly missile with his body, personally absorbing the full force of the explosion to save his comrades from possible injury or death. His indomitable courage, outstanding initiative, and valiant efforts in behalf of others in the face of almost certain death reflect the highest credit upon Cpl. Dewey and enhance the finest traditions of the U.S. Naval Service.

From Freedom Foundation: Peter Collier details what happened next in Medal of Honor: Portraits of Valor Beyond the Call of Duty:

“Dewey was taken back to the aid station. For an hour he lay outside waiting for treatment, not sure that he would make it. Then he was given a shot of morphine and taken to a trench filled with other wounded Americans. He spent the rest of the night wondering which side would win the battle raging outside. Shortly after dawn, when American troops relieved his company, he was evacuated.

“Doctors treating him in the field hospital found that in addition to the gaping shrapnel wounds throughout his lower part of his body, he had also taken a bullet in the stomach. He was hospitalized in Japan for a month, then flown to the States, where he would spend three more months convalescing. On the way home, the plane stopped over briefly in Hawaii, where an officer visited him in the hospital and presented him with the Purple Heart. When Dewey casually mentioned that he had heard his caption was going to recommend him for the Medal of Honor, the officer shot him a look that made him resolved never to mention it again.