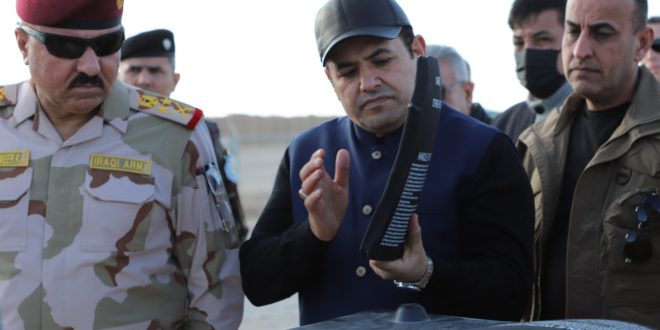 Qasim al-Araji, National Security Advisor of Iraq, and Iraqi Staff Lt. Gen. Abdul Amir al-Shammari, deputy commander, Joint Operations Command for Iraq, inspect body armor during a visit to Al-Asad Air Base last month. The Iraqi officials visited the base to get a firsthand look at how the new advise and assist relationship between U.S. and Iraqi forces is working.

U.S. Troops, From Combat to Adviser Roles in Iraq, Remain at Risk, Retain Right of Self-Defense

Officials from Combined Joint Task Force – Operation Inherent Resolve announced last night that Coalition forces were targeted by indirect fire in areas of northeast Syria. According to the Coalition, rounds did not damage any Coalition areas, but impacted civilian areas near Al Shaddadi.

Four individuals suspected of being involved in the attacks were captured by InSF HAT and Syrian Democratic Forces. The suspects were captured near Muamal, just northeast of Dayr Az Zawr, and were in possession of weapons, ammunition, and communications equipment.

“We continue to maintain all appropriate force protection measures,” said a Coalition official. “We maintain the inherent right of self-defense and will respond to any attack at a time and place of our choosing. We continue to work with our partners to determine whether any civilian casualties or damage resulted from this deliberate attack. Because the event is under investigation, no additional information can be provided at this time.”

CJTF-OIR advises, assists, and enables partner forces to maintain the enduring defeat of Daesh in designated areas of Iraq and Syria. SOJTF-L provides regional partner forces with the access to training, advisory, assistance, and operational support to combat malign actors, promote stability, and to improve partner nations’ ability to respond to any crisis, no matter where it may arise.

Even though the mission of U.S. forces in Iraq has changed, the troops are still in a hazardous environment and retain the ability to defend themselves, Pentagon Press Secretary John F. Kirby told reporters today.

The mission of U.S. forces shifted from combat to advise and assist two weeks ago, per an agreement between the United States and Iraq. Yet troops advising and assisting Iraqi forces are at risk.

Forces launched strikes against rocket-launching sites near Green Village in Syria and shot down two armed drones targeting forces in Al Asad Air Base. There were no casualties among friendly forces.

The strikes against the rocket-launching sites were not airstrikes, Kirby said. Forces hit the sites to ensure rockets were not launched against coalition forces.

But that begs the greater question of if U.S. personnel are at risk in the mission. “They clearly are at risk in the region,” Kirby said. “I mean, one of the reasons why these sites were hit was [that] we had reason to believe that they were going to be used as launch sites for attacks on Green Village. So clearly, our men and women remain in harm’s way. And we have to take that threat very seriously. We always have the right of self-defense.”

Kirby would not say who manned these rocket-launching sites. “That said, we continue to see threats against our forces in Iraq and Syria by militia groups that are backed by Iran,” he said. “But again, I don’t have specific attribution on who was responsible for these specific sites.”

Iran is a major player in Iraq and U.S. officials have been consistently concerned about the threats to U.S. forces in the region. “That is not a new concern,” Kirby said. “And I think we’ve seen in just the last few days, that there have been acts perpetrated by some of these groups that validate the consistent concern that we’ve had over the safety and security of our people.”

On Russia, Kirby said should NATO allies ask for more U.S. capabilities in Europe, “we would be positively disposed to consider those requests.” Still, he noted, the United States has a “very large and robust footprint” in Europe that complements the sizable capabilities that European allies possess. “There already exists a lot of capabilities [in Europe],” he said. “And some of those capabilities could be moved around — if that was, in fact, the request and was decided that would be the most prudent thing to do.” There are many options that President Joe Biden has if Russia decides to launch another incursion into Ukraine, Kirby said, but nothing has been asked for yet.