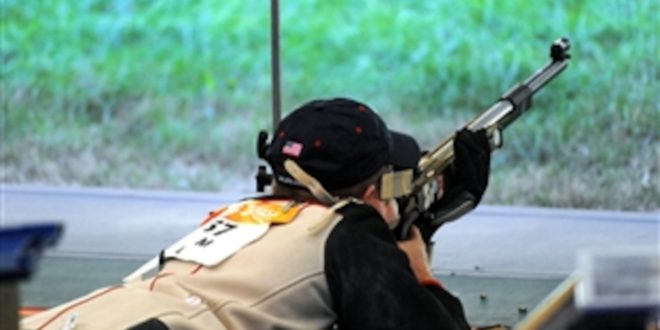 Michael “Mike” Anti is a sport shooter, a retired Army major and a marksman in the Army World Class Athlete Program.

Anti joined the Army in January 1988 and was stationed in Korea with the 503rd Infantry Regiment before being assigned to the U.S. Army Marksmanship Unit at Fort Benning, Georgia, as an international rifle shooter from 1991 to 1994.

While at Ft. Benning, Anti earned his Airborne Badge and Ranger Tab. In 1994, he was assigned to the 1st Cavalry Division at Fort Hood, Texas, and following this assignment, Anti was reassigned to the USAMU in 1998.

Anti learned to shoot at a junior club when he was nine so he could hunt in North Carolina with his father, who was also a rifle coach for the Marine Corps and the Naval Academy.

Anti went on to become a four-time All-American at West Virginia University, where he led the WVU rifle team to three National Collegiate Athletic Association Championships. He graduated with a bachelor’s degree in business from WVU in 1987.

During his first season in charge of the Navy rifle program in 2017-18, Anti guided the Midshipmen to their best finish in program history at the Great America Rifle Conference championship after finishing third overall.

In the 2018-19 season, Anti coached Navy to the NCAA National Championship for the first time since 2011, and the Midshipmen placed seventh overall in the national championship.

Anti guided the Naval Academy to its second-straight NCAA Championship qualification during the 2019-20 season. The Midshipmen qualified seventh overall in the national tournament field before the event’s cancellation due to COVID-19.

During the 2020 to 2021 season, Anti led Navy to a sixth-place finish at the GARC championships.

No stranger to the Navy rifle program, Anti’s father Ray, led the Midshipmen for 12 years from 1986 through the 1998 season following a distinguished 30-year career in the Marine Corps.

The U.S. Navy Marksmanship Team (USNMT) represents the Department of the Navy in inter-service and national competitions. Our mission is to train Sailors in marksmanship and small arms safety, while implementing Navy innovations in small arms technologies. 2021 marks the 60th year of Navy marksmanship competitions.

In 1957, Chief of Naval Operations Adm. Arleigh Burke, an ardent supporter of small arms proficiency, took steps to get the Navy’s marksmanship training program on course by issuing a directive establishing marksmanship instructor billets throughout the Navy. To find marksmanship experts, records were searched to locate the top rifle and pistol marksman on active duty in the Navy. The Chief of Naval Personnel selected 32 highly qualified sailors as the core of the Navy’s marksmanship team. The Small Arms Training Unit (SATU) was also established at Naval Training Center San Diego and served as the nucleus of skilled marksmen to compete, instruct, coach, and function as match officials at Navy-wide and national matches.

Over the years, the SATU was dis-established and Navy marksmanship experienced many changes and re-organization. However, the Navy Marksmanship Team (USNMT) continued to support competitive marksmanship with Sailors who dedicate their time and talent to advance precision marksmanship. Today, team members from all officer designators and enlisted rates compete and train Sailors in the fundamental and advanced skills supporting precision marksmanship. Additionally, each year at the annual Civilian Marksmanship Program (CMP) national pistol and rifle matches, Sailors from the USNMT compete while providing civilian marksmanship instruction and community outreach. The team can also be found competing at various matches around the country and at fleet concentration areas.