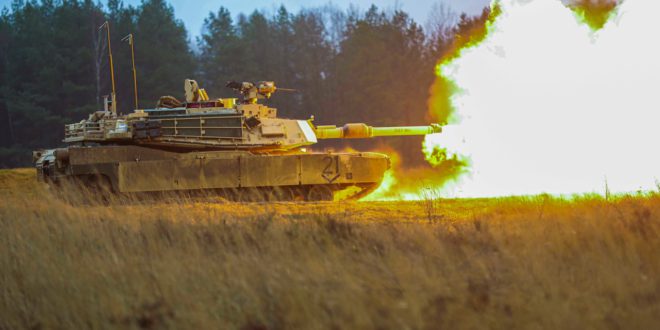 The NATO allies are united in opposing Russia’s actions along Ukraine’s borders, and Secretary of Defense Lloyd J. Austin III emphatically said U.S. commitment to the common defense is ironclad.

In addition to the many moves the United States has made to strengthen NATO in the past months, Austin announced that a U.S. Army Stryker company will deploy to Bulgaria for joint training opportunities.

“These troops will be departing Germany in coming days, and they will help ensure our readiness and interoperability with Bulgaria as our NATO ally,” the secretary said.

Russia has amassed more than 150,000 troops along Ukraine’s borders including in Crimea, Belarus and in the Black Sea.

“In many ways, this brings Russian troops right up to NATO’s doorstep,” he said. “So, let me begin today by making clear that America’s commitment to NATO and to Article 5 remains ironclad. As President Biden said a couple days ago, we will — if we must — defend every inch of NATO territory.”

The secretary said there is no reason for Russian President Vladimir Putin to order troops to invade Ukraine. “Ukraine does not threaten anyone, let alone its Russian neighbors,” Austin said. “And yet, that is what Moscow would have us believe. That is how Mr. Putin continues to justify his assembly of significant combat power.”

Officials in Moscow have said that Russian forces are withdrawing at the conclusion of military exercises. “Quite the contrary, we see them add to the more than 150,000 troops they already have arrayed along that border — even in the last couple days,” the secretary said.

Russian forces are approaching the border with Ukraine. The Russians have added more combat and support aircraft and have sharpened their readiness in the Black Sea. They’re even stockpiling blood supplies, the secretary said.

“I was a soldier myself not that long ago,” he said. “I know firsthand that you don’t do these sorts of things for no reason. And you certainly don’t do them if you’re getting ready to pack up and go home.”

Austin said the NATO allies must remain vigilant and be prepared for Russian false-flag operations. “We will continue to explore ways to enhance our readiness as the United States and others have done with additional troop deployments to NATO’s eastern flank,” he said. “And we will closely match Russian words to Russian deeds: What they say [as opposed] to what they actually do.”

Putin has said he wants more dialogue, and Austin and the rest of the NATO leaders have said they welcome that sentiment. “We believe there is still time and space for diplomacy to work, and we are in lockstep with our allies and partners toward that end,” Austin said. “A peaceful outcome that respects Ukraine’s sovereignty and territorial integrity represents the best outcome — for Ukraine, to be sure, but also for Russia and for the Russian people. If Mr. Putin is serious about achieving that sort of outcome, he will find in the United States and in this alliance no better or more serious interlocutor.”

If he is not serious about dialogue and re-invades a sovereign country, “it will be Mr. Putin who will bear the responsibility for the suffering and the immense sacrifice that ensues,” he said.

“I joined the United States Army in the middle of the Cold War, and I have served and fought alongside NATO allies for the better part of my adult life,” the secretary said. “But I can honestly say that I have never seen the alliance more relevant, more united or more resolute than I do right now. Mr. Putin says he doesn’t want a strong NATO on his western flank. He’s getting exactly that.”

Austin said he is “incredibly proud” of the NATO alliance, and he said he’s “satisfied in the knowledge that we will be sure-footed in the face of aggression, but dedicated, as always, to the prospect of peace. There is nothing inevitable about this looming conflict. It can still be averted. The path of diplomacy may be difficult, but it is still worth the trek.”

“We are told that February 16 will be the day of the attack,” Zelenskyy said in a video statement posted on Facebook, with NBC following up. Spokesman, Sergii Nykyforov, said that the president, was only repeating media reports.

“The president referred to a date that was spread by the media,” the spokesman told NBC News.

Some observers said Zelenskyy appeared to Ukrainian speakers to have been sarcastic when discussing the possible date of an attack.

15 Feb, Biden reveals the underlying energy concerns in a speech that is an attempt to portray Greatness and fighting for liberty and freedom. Biden said diplomacy is on the table, but added:

“We have not yet verified that Russian military units are returning to their home bases.  Indeed, our analysts indicate that they remain very much in a threatening position.  And the fact remains: Right now, Russia has more than 150,000 troops encircling Ukraine in Belarus and along Ukraine’s border.

“An invasion remains distinctly possible.  That’s why I’ve asked several times that all Americans in Ukraine leave now before it’s too late to leave safely.  It is why we have temporarily relocated our embassy from Kyiv to Lviv in western Ukraine, approaching the Polish border. …..

Biden continues about Russia choosing bloodshed, forgetting about Obama Biden wars Syria, Libya and Yemen. Then he brings up the issues that won’t fade: Oil and natural gas. Keep in mind U.S. interventions such as Yemen are at the request of Saudi Arabia.

“And when it comes to Nord Stream 2, the pipeline that would bring natural gas from Russia to Germany, if Russia further invades Ukraine, it will not happen.

“While I will not send American servicemen to fight Russia in Ukraine, we have supplied the Ukrainian military with equipment to help them defend themselves.  We have provided training and advice and intelligence for the same purpose.

“Already, in response to Russia’s build-up of troops, I have sent additional U.S. forces to bolster NATO’s eastern flank.

“And if Russia invades, we will take further steps to reinforce our presence in NATO, reassure for our Allies, and deter further aggression.

“This is a cause that unites Republicans and Democrats.  And I want to thank the leaders and members of Congress of both parties who have forcefully spoken out in defense of our most basic, most bipartisan, most American principles.

“I will not pretend this will be painless.  There could be impact on our energy prices, so we are taking active steps to alleviate the pressure on our own energy markets and offset rising prices.

“We’re coordinating with major enersy [sic] — energy consumers and producers.  We’re prepared to deploy all the tools and authority at our disposal to provide relief at the gas pump.

“And I will work with Congress on additional measures to help protect consumers and address the impact of prices at the pump.

“We are not seeking direct confrontation with Russia, though I have been clear that if Russia targets Americans in Ukraine, we will respond forcefully.

“And if Russia attacks the United States or our Allies through asymmetric means, like disruptive cyberattacks against our companies or critical infrastructure, we are prepared to respond. Full Speech

Defense ministers are meeting as the alliance faces the biggest challenge in Europe since the dissolution of the Soviet Union.

Alliance members are united in their opposition to Russian threats against Ukrainian sovereignty and have called on Russia to de-escalate the situation by pulling its troops from the border of Ukraine.

The Russian defense ministry said yesterday that some military units are leaving their positions near Ukraine. “That would be good, but we have not yet verified that,” President Joe Biden said during an update on the situation from the White House. “We have not yet verified that Russian military units are returning to their home bases. Indeed, our analysts indicate that they remain very much in a threatening position. And the fact remains: Right now, Russia has more than 150,000 troops encircling Ukraine in Belarus and along Ukraine’s border.” Spotlight: NATO

The Russians have sent mixed signals, NATO Secretary General Jens Stoltenberg said today at the beginning of the meeting of the alliance’s defense ministers. “I think the message and the signs we heard from Moscow yesterday provides some grounds for cautious optimism because that was a message about diplomacy,” he said. “We have been ready for diplomatic efforts [and] talks with Russia throughout this crisis. We have stated that again and again and conveyed our proposals to Russia in writing, and we are waiting for their response.”

“At the same time, we have not seen any withdrawal of Russian forces,” Stoltenberg continued. “That contradicts the message of real diplomatic efforts. It remains to be seen whether there is a Russian withdrawal. We are monitoring very closely what Russia does in and around Ukraine. They have increased the number of troops and more troops are on their way. So far, there is no de-escalation.”

The Russian build-up is unprecedented since the end of the Cold War, and Stoltenberg repeated that Russian President Vladimir Putin “still has time to step back from the brink, stop preparing for war, and start working for a peaceful solution.”

The alliance is working for a diplomatic solution, but it is preparing for any scenario. The secretary general welcomed the increased U.S. presence in Europe with more troops in the eastern part of the alliance. The United States moved a 1,000-man Stryker squadron from Germany to Romania and is deploying a brigade from the 82nd Airborne to Poland. There is also a 300-man headquarters now operating in Germany.

In addition, Secretary of Defense Lloyd J. Austin III has ordered 8,500 service members to a heightened level of readiness and set to deploy if NATO activates its Rapid Reaction Force.

The U.S. troop movements are concrete examples of the U.S. commitment to NATO and the premise that an attack on one is an attack on all. “You’ve heard us say a number of times that we’re committed to Article 5 and also the principles of collective security,” Austin told Stoltenberg before the ministerial began. “So you can expect that commitment will remain rock solid going forward.”

Previous Green Beret Lawrence N. Freedman, Quiet Professional, the first American killed in Somalia, 1992
Next The Rise and Fall of Honduran President Juan Hernández as he is arrested and shackled