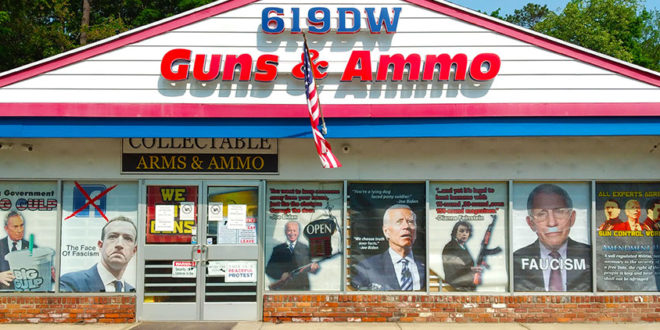 The Gun shop owner wants to see who is entering his shop, making sure that no masked gunman enters:

Keyboard Warrior and activist Ben Jackson is bent all out of shape, having a “meltdown” Kristin Taylor of the Gateway Pundit wrote. Jackson claiming that the faces of the liberals on the storefront promote violence??? Freudian slip? Johnson profile states that he is a former Navy Seabee:

He tweeted: “This is the gun shop in my parents town. Don’t fucking tell me this isn’t a call to violence. Don’t tell me gun culture isn’t sick to its very core,”

The faces plastered on the gun shop to which he thought were promoting violence were those of Joe Biden, Dianne Feinstein and Anthony Fauci and anti first amendment FB boss.

Welcome to 619DW Guns and Ammo, New Hampshire’s friendliest Gun Shop.
We are no longer on FASCISTBOOK.  Our goal is simple. To deliver a wide variety of Firearms and Ammunition at the best prices possible!! We offer out of state transfers for only $20 and we buy used firearms

One shop owner during the Obama years claimed that he was making a statement, that Obama was the best gun salesman, thus he deserved a spot on his gun shop front.

On the other side of the store front, the bad guys such as Hitler were also motivators as owning self defensive weapons is important to preclude such murderous tyranny.